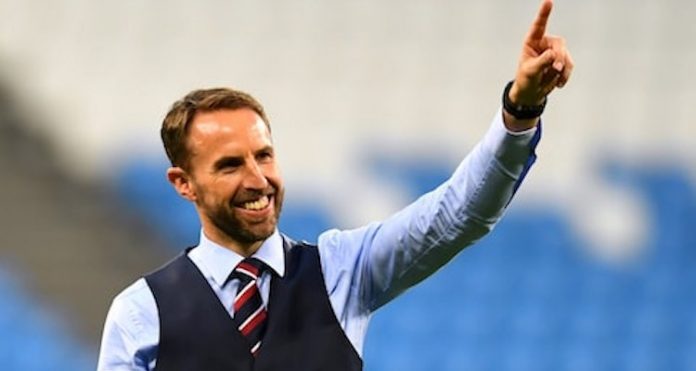 Happy Sunday to you all. I hope you’re all nice and warm as it seems almost the entire planet is experiencing this heatwave. Ireland is hotter than Satan’s gooch, and although I was at a gig last night and stayed up late having some refreshing beverages in the back garden, I suspect my hangover is nothing compared to all of you lot in England right now.

How’re the heads, folks? Yesterday in Dublin there were lots of English folks around, and one group of lads were talking about how nervous they were ahead of the game against Sweden. The elation of winning coupled with the relief makes me think they would have enjoyed a few pints.

3pm kick-off means a couple of beers before to steady the nerves, then the in-game beers, then the post-game beers. Ouch. I hope you all have your painkillers of choice to hand and I recommend washing a handful down with a Bloody Mary*.

So, the game, I saw lots of people say Sweden weren’t great and I think that’s generally true, but all the same Jordan Pickford had to make some seriously good saves at important moments. The one at 1-0 when he got down to slap the ball away down at his near post was fantastic, and there was another in the second half which came at a crucial moment. Let one in and the game changes.

Harry Maguire opened the scoring for England with a thumping header, and you know how much I love a thumping header. However, I feel that for a header to be truly thumping it has to hit the back of the net without touching the ground. There’s logic and common sense in heading it downwards, it makes it more difficult for the keepers, but it comes at the expense of some thumposity. I’m sure he doesn’t mind though.

Then some other bloke scored a goal for England and after that it was relatively easy going. Unless you were watching the BBC, which I was, and the commentary – while understandably excited about what was going on – was a bit over the top at times. Martin Keown’s comment about people who might not be watching, instead reading a book, made it sounds like reading books was a weird pastime like soap carving or badger snogging.

Anyway, England go through to play Croatia who won on penalties. I didn’t see all of this game because of the gig, but one of the wonders of modern technology is that streaming shit on your phone is pretty easy. Did I feel bad that the man on stage at one point derided people for using their phones and that I subsequently stood there watching a penalty shoot-out as he and his band played?

No, no I did not. It just meant we had a nice soundtrack to accompany the penalties, and Croatia held their nerve to go through. Vlad is probably spewing with the injustice of it all, but he’s got bigger fish to fry I reckon. So, that’s the semi-finals all sorted: England v Croatia, France v Belgium, and in this tournament you just don’t know what’s gonna happen.

Arsenal news: Not a lot other than Lucas Torreira’s signing is expected to be completed next week and that’s going to be that in terms of our transfer business. I think that merits a little more analysis than I’m capable of this morning, so tune in to the same bat channel tomorrow for further thoughts on that.

In the meantime, enjoy your day as the planet boils and we’re one step closer to the end of all life as we know it!

* Please note: This is not serious medical advice. Any bad stuff that might happen if you do this is entirely your own fault and we bear no responsibility for it whatsoever. I’d goddam love a Bloody Mary though.