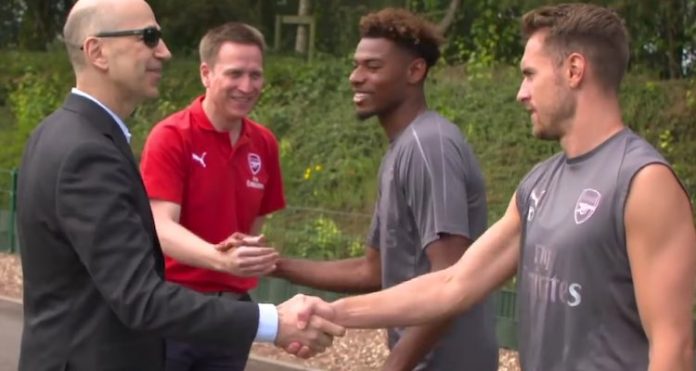 Arsenal have been providing us with some selective insight into the first week of training with a series of videos showing the chaps at work. They’re interesting, as far as it goes, and the lads seem in good form.

A bit of running. A bit of gym work. Some more running. Rondos. Someone did a nutmeg. Someone did a bit of skill. All decent fun and I suppose what we’re seeing is something of a change from when Arsene Wenger was in charge, because there didn’t seem to be quite as much access for the #content makers. Which isn’t to say the #content wasn’t there because we trained every day then too.

There will be some who believe this stuff should happen behind closed doors, but I don’t think we’re going to see anything mission critical really. There isn’t going to be an Instagram story which reveals the team before an important match, or Unai Emery in the background of a YouTube video detailing his tactics.

This is simply the way things work now. There are channels to be populated with stuff that people want to watch or read or hear, and that’s just the way it. Also, there’s no doubt that some of it is quite interesting, you notice little snippets here and there which might inform your way of thinking.

For example, I thought the interaction between Aaron Ramsey and Ivan Gazidis was quite something. I’m not claiming to be an expert in body language or anything like it, so I’ll let you make your own minds up on it as the chief executive does a meet and greet down at the training ground. It’s in the opening part of this video:

I’m a bit worried about the Ramsey situation overall. As I touched on the other day, there hasn’t been the kind of progress towards a new contract that we might like. Things can change very quickly, of course, and perhaps he’ll enjoy the training and work with Unai Emery so much that he’ll be enthused enough about the future to commit his best years to the club.

We are now entering dangerous territory though, as he has less than 12 months remaining on his current deal (the same goes for Danny Welbeck too, by the way). Whether or not you consider the re-signing of Mesut Ozil as a success last January, I don’t think anybody could make a solid case that the way it went down was ideal. The German, along with Alexis Sanchez, was at a point where he could have negotiated a pre-contract with a club abroad, and overall their contractual situations were definitely a distraction.

Ozil stayed, Alexis left, but in the build-up to that period when things happened, Arsenal had made offers to both players which were deemed unacceptable, for whatever reason. It’s unthinkable that the club haven’t made substantial offers to Ramsey to tempt him to sign a new contract. If we’re looking at players like Pierre-Emerick Aubameyang and Henrikh Mkhitaryan coming in to earn around £180-200,000 per week, you have to think the Welshman has been put in that same kind of bracket and any offer made would reflect that.

And yet he hasn’t signed. Does it mean he wants more? Does it mean he’s prepared to wait until January to see if he can’t squeeze even more out of a club who are basically over a barrel if they want him to stay? Is his desire to play abroad – something he’s spoken about in the past – the key driver to all this? If it is, then seeing out your contract and being available on a free transfer would certainly give you options in that regard.

Looking at it from the club’s point of view, how do they deal with it? You can’t talk about a catalyst for change if, for example, you decide to cash in and sell to another Premier League rival. I mean, you can, and credit to Gazidis for the substantial amount of work that’s gone on in the last while, but I don’t think your credibility remains fully intact if you sanction that kind of move. Which is why I don’t think he’ll do that.

What then? Sell at a cut price to a club abroad? A player swap deal to obfuscate things a bit so people can argue about the perceived value of the player coming in versus the player going out versus in the length of contract and all that? Could that be why we’re seeing links to André Gomes of Barcelona?

It’s a complicated one this. Of course there’s a very simple outcome in which Ramsey signs a new deal and all this worry can be put to bed, but as long as he chugs along without putting pen to paper, the more difficult it becomes. And the likelihood of an outcome we don’t particularly enjoy increases.

Not a lot else going on, other than Ever Banega apparently deciding he’s happy at Sevilla and doesn’t fancy a move to Arsenal. I’m still of the opinion that our midfield is in need of a bit more work, even if we do sign Lucas Torreira from Sampdoria, but that’s a discussion for another day.

For those looking for a podcast today, sorry but it’s been a very slow week on the Arsenal front and a hectic one around here. Building type people didn’t leave here until around 9pm last night, so this is a week off for the Arsecast. James and I will be here on Monday with an Arsecast Extra, and if you are looking for something to listen to, consider signing up as an Arseblog Member on Patreon to get access to all the podcasts we have available there.

Recent additions include a two part special reliving the 2001-02 season, and a great interview with Philippe Senderos. You can get access for just €5 per month – sign up here if you fancy it.

Righto, more from me tomorrow, and if anything stirs we’ll have it over on Arseblog News.