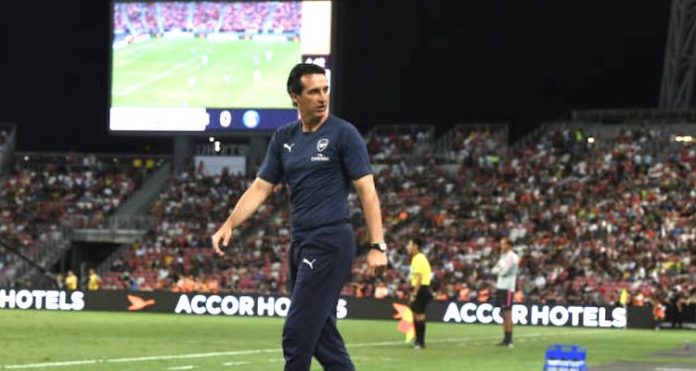 The rains continue. So much so that a man with 80s hair is standing outside my window blessing them like he’s down in Africa.

Arsenal played PSG in Singapore yesterday and ran out 5-1 winners. Report and goal clips here. As it’s pre-season, against a very under-strength opposition side, there’s not a huge amount we can take from the result or the performance, but a few observations nonetheless.

Again with the caveat of it still being summer and the manager is trying to give everyone game time, I think his deployment of Aubameyang this season will be important. We looked better in the first half when he was playing up front. His pace allowed us to stretch the PSG defence, and he was involved in the goal as well as having a couple of chances himself.

When he moved wide left in the second half to accommodate Alexandre Lacazette he looked less effective. I guess it’s not particularly incisive to suggest that one of Europe’s top strikers should play in his best position, but it does feel to me like he and Lacazette are either/or options, rather than complementary ones.

It’s not to say they can’t play together, and we saw that the former Dortmund man is well capable of contributing as he scored 10 goals last season as Arsene Wenger played him out wide a lot, but I think this is a big decision for the new boss, and one which could have a considerable impact on how his team plays next season.

The young Frenchman was, to my mind anyway, far more impressive against PSG than he was against Atletico Madrid. In the first game I thought he over–complicated things at times, dwelt on the ball a little too long, and almost got caught out in dangerous positions. Yesterday he simplified things and it made him better.

No doubt someone had a word with him about those things, and he clearly paid attention. He also showed he’s got an eye for a pass with a lovely ball over the top which provided Aubameyang one of his chances on goal.

Early days obviously, but the first impressions are positive.

The idea that Arsene Wenger didn’t do tactics is obviously daft. You don’t manage at the top level for as long as he did without them, but he rarely, if ever, spoke in any great detail about his system, thus feeding into that myth. Even then, he was a manager more focused on getting the best of out individuals and his team through freedom of footballing expression rather than rigid structures.

So, it’s kind of refreshing to hear Unai Emery go into his team’s set-up and what he wanted from them. From yesterday on Ozil:

He started today at No 10 with Matteo and Mohamed behind him. The first one would go up and then find him between the lines, or sometimes Mkhitaryan. When we do have the ball, we can press with the striker and a No 10 almost like a 4-4-2 in a press. It depends because Mesut can play on the right and go inside, driving in to open up space for the right back.

Then on how the substitutes enabled us to get on top of the game:

The young players gave us the pressing back and allowed us to change our positions and play with three in midfield. Tactically, we’ve been working all week in training and watching movies. The first idea we are working on is without the ball and the right place to be pressing.

As I wrote yesterday, improving us off the ball will go a long way to making us a more secure team defensively, and it’s going to be very interesting to see how we look in a few weeks time with Lucas Torreira in the side and Granit Xhaka back in the squad too. I still have some worries about the centre of our defence, the players for those positions all have something to prove, but better protection of them higher up the pitch may well offset some of those issues.

The kids are all right

We have been down this road before, but in Eddie Nketiah, Reiss Nelson, Emile Smith Rowe and even Ainsley Maitland-Niles, we have a really exciting crop of young talent coming through. We all know the success rate, and how hard it is for a young player to force their way into the first team and stay there, but there is something special about a homegrown talent making the grade.

The Europa League group stages should be a development ground for these guys, and perhaps loan moves in the second half of the season as and when we start to take things a bit more seriously in Europe, but they’re showing Emery they have talent and I’m sure he’ll be paying close attention to what they’re doing on this tour.

Right, that’s it for this morning. Just a reminder that if you haven’t had a chance to listen to Friday’s Arsecast yet, you can hear about the remarkable story of Kaiser: the greatest player never to have played football. It’s amazing stuff, you can check out the podcast below. Till tomorrow.