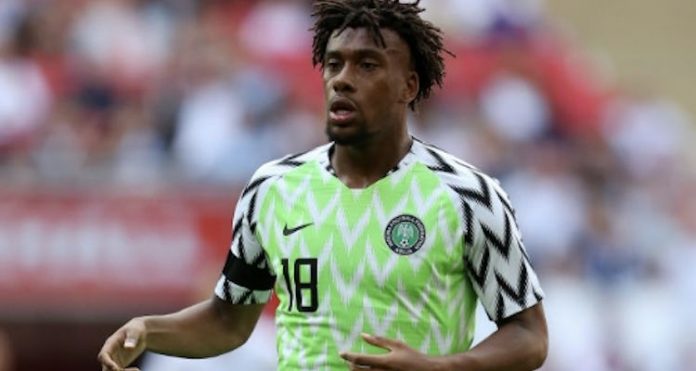 5.30am on a Sunday morning. I’ve seen many of them in my life. In the not too distant past, there was a time when it meant Saturday night was still going.

Now I can see the sun rising over the houses at the back of the house because I’ve been woken up by an insistent puppy. She is quite a vocal puppy too. Once she’s done her early morning business, she insists on hugs and makes these strange grumbling noises like ‘Oh I can’t believe you were asleep for soooooo long’, complaining at me.

Then she gets a snack, I make coffee and she goes back to sleep at my feet as I write the blog. She’s settled into this routine pretty quickly, which is great because when she first arrived morning was the time to CHEW EVERYTHING! Now she snores away happily until breakfast time.

Anyway, there’s not a lot happening today. Alex Iwobi scored for Nigeria in a friendly against England yesterday, but his side lost 2-1 in the World Cup warm-up game. He’s definitely one of the players I’m curious to see under the new boss.

I know he has struggled at times, there are moments when he looks like he’s got everything you need to be a really good player, then too many others when his decision making or final ball lets him down. It would be fair to say his last season was indifferent at times, but he still finished with 3 goals and 5 assists in the Premier League (7 assists in all competitions).

To put that in context, he made more assists than Cesc Fabregas last season. Or Eden Hazard. Or Gylfi Sigurdsson. Or Theo Walcott. Or, indeed, Sead Kolasinac. Which is just to illustrate that stats comparisons like this don’t tell you a huge amount, but it does show that there’s creative potential there which could be improved on.

I know it’s something I’ve written about before, but while there’s no denying Arsene Wenger’s ability to spot young talent – and it’s always been to his credit that he was willing to give them a chance – players have come through into the first team, done well, then seemed to hit a wall in terms of their development.

I think Iwobi was one of those, and we’ll now see what he’s made of under a new coaching system, and with a manager who is not emotionally tied to him in any way. I think there’s the potential for Emery to be more ruthless because he’s not really invested in these guys as people the way Wenger was.

It’s another debate as to how much the Frenchman’s desire to see his proteges make their way to top influenced his decision making, but I do think he always wanted to see the best in them and was prepared to give them chances to demonstrate that. Maybe, at times, those chances weren’t merited, but ultimately Wenger knew he had to win football matches and picked teams he thought could help him do that with personal considerations secondary.

Iwobi is still only 22, he’s at a crucial point in his career, no question, and how far he goes will be down to him to a large extent. I think the staying up late thing was blown out of proportion really – particularly when you look at the source of that story, and that publication’s willingness to target young black footballers. Remember, they ran with a headline saying the party was ‘drug fueled’ and there was no evidence at all that Iwobi was doing anything like that, so it was pretty insidious (as you’d expect from that paper).

It was damaging to him, but he can very easily manage that part of his life, and how he’s perceived, by how he behaves. It’s ok to have a good time with your friends, but if you want to be the best you can be, maybe pick and choose your moments.

I imagine, beyond the obvious ones over whom he’s got a clear idea, most players will be given a chance by Unai Emery to prove themselves to him. Iwobi is a talent but there’s also a question mark beside his name and it’s down to him to erase that. This is a young man who scored the goal to take Nigeria to the World Cup, the stage is set for him to show what he can do this summer, and most of all, he’s an Arsenal academy graduate.

A guy who has come through the ranks, a homegrown talent, something fans want to see and usually get very invested in. I know some have written him off already, and I do think he’s got plenty still to prove, but I really hope he can flourish under the new manager because if Emery can get more from him in terms of performance and consistency, he’d be a real asset to this squad.

Right, have yourselves a great Sunday. The sun is shining here, I’m gonna take the dogs to the beach.