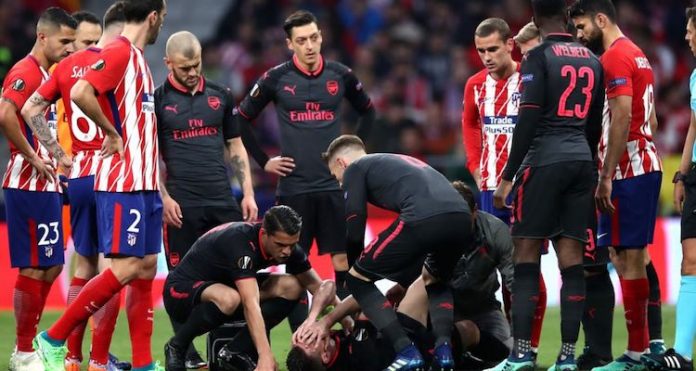 Laurent Koscielny was not a name familiar with many people when he joined Arsenal in the summer of 2010. The then 24 year old had just played his first season of top flight football, having joined Lorient from Tours (where he was a teammate of Olivier Giroud).

We paid £10m for him, he’s played 324 games for us, scored in a cup final, scored a couple of vital final day goals, and having dealt with a chronic ongoing Achilles tendon issue for years, finally paid the price for putting his body on the line – and being asked to put his body on the line – on Thursday night.

With nobody anywhere near him, he crumpled the ground in obvious agony. That Achilles had gone, ruptured, and with it his ability to help influence an important game for his club, and a final chance of playing at a World Cup. France confirmed yesterday that he would miss the tournament this summer.

It was then very disheartening to hear some Arsenal fans talk about Koscielny the way they did on the way out of the stadium on Thursday. It was, I should point out, a minority – overheard conversations perhaps in the heat of the moment, the frustration of the Atletico tie and being held back in the stadium, but that’s no excuse for some of what I heard. To say it was unkind would be diplomatic.

And yet I bet the people who made those comments would demand a player ‘give 100% son, you’re wearing the famous red and white, the badge, do it for the Arsenal’. And while his mistake last week was fresh in the mind, the last thing you can accuse Koscielny of is not giving it everything he has.

Daily treatment for years to ensure that he can play. If anyone has ever had problems with their Achilles, they will know first and foremost how painful it can be, so going through that on a regular basis would have hurt. The injections to help you get out on the pitch. Then there’s playing with it. Knowing in the back of your mind you’re not 100% fit. Fearing that today might be the day when it gives way. Ignoring the signs, the aches, the pains, as you run and twist and turn and do all the things you’re expected to do as a player.

Until one night, despite all that treatment, despite the yoga, the stretching, the deep heat, the needles, the rub downs and massages, the vigorous warm-up, you change direction slightly and SNAP, you’re done. It’s happened, and at nearly 33 years of age you know that this is going to be very, very serious. The stretcher is on, you go off, and you wonder will you ever be the same again.

That’s where we are with Laurent Koscielny. This is, depending on the seriousness of the rupture, potentially a career ending injury. Or one which has such an effect on him that he may well have to consider his options, whether it’s retirement, or moving to a different club at a slightly different level. One minute you’re hoping to pull off a result to get to European final and then onto the most prestigious international tournament of them all, the next you’re in a heap on the ground with an injury so bad that even Diego Costa is being nice.

So, frankly, any Arsenal fan wishing ill-will on him can go take a long walk off a short pier. Since he joined this club he has been a consistently excellent performer. Not flawless, he’s made mistakes – but in a team which has for so long struggled to defend the fact that he’s stood out and developed into one of the best central defenders in Europe is a testament to his quality and his character.

His partnership with Per Mertesacker was one of the best we’ve seen in recent years, they complemented each other very well as Koscielny’s pace and aggressive style dovetailed perfectly with the German’s positioning and reading of the game. If Koscielny failed to win it high up the pitch the way he often did, the BFG was there to mop up, and likewise the Frenchman’s pace was often vital to cover for his partner.

Aside from that, however, we also have to put Koscielny’s consistency into the context of his other partners at the heart of our defence. There’s a list of players who struggled to cope with what was asked of them defensively by Arsene Wenger. Sebastian Squillaci, as I’ve mentioned before, outlined exactly why he – despite being an experienced international player who joined us from European trophy winning Sevilla – couldn’t deal with it.

Mikael Silvestre. Johan Djourou. Thomas Vermaelen. Shkodran Mustafi. All players who had/have serious flaws in their game, or simply couldn’t perform to a consistent standard. Yet alongside them, Koscielny did his best to hold things together. He wasn’t always perfect, but you’d need to be superhuman to pull that off when your defensive partners are so flawed. It’s a credit to him that throughout his career at this club, he’s played as well as he has as often as he has.

We can’t also ignore the debilitating effect that this injury must have had on him, both physically and mentally. Some players can’t play unless they feel 100%, and there’s no way Koscielny has felt that for a long time. It’s draining and difficult to play with an underlying injury and I think this season we’ve seen signs that it’s robbed him of some of his pace and sharpness, the things which made him such a formidable defender.

Yet throughout he’s been committed, played through the pain, sacrificed his physical well-being to pull on the Arsenal shirt, and some people think it’s ok to pillory him in the wake of a horrendous injury? Get the fück out of here.

I believe most Arsenal fans are appreciative of him as a player and sympathetic to his situation now. It’s never nice to see a player suffer a serious injury, and make no mistake that at this stage of his career, this is very serious for Laurent Koscielny. I hope that he can make a full recovery, but given the length of time he’s likely to be out, this is going to have a big impact on his future because with Mertesacker retiring, and Koscielny sidelined, Arsenal lack experience and quality at centre-half. That’s an issue that has got to be addressed in the transfer market this summer.

Where it leaves him when he gets fit again, if he gets properly fit again, remains to be seen, and it would be a crying shame if this was the beginning of the end for him. It’s hard not to fear that’s the case, so all we can do is wish him a speedy and full recovery, with genuine thanks and appreciation for his service until now.

For a bit extra this morning, check out yesterday’s post-Madrid Arsecast – and if you didn’t check out Andrew Allen’s wonderfully evocative blog yesterday, do yourself a favour and get reading.