Arsene Wenger’s last home game in charge will be emotional

European elimination on Thursday means that the only real significance of today’s fixture is to secure sixth place. A win would do it, a point would do it too when you take into account goal difference, and beyond that it’s all about sentiment.

How favourably disposed you are towards Arsene Wenger will dictate how you feel about today. For some, the timing of his departure is long overdue. For others, it’s the right decision but still one that leaves them emotional. You can believe it’s time for him to go but still like and respect the man, but of course everyone is free to feel however they like about it.

Nevertheless, when a manager who has served the club for 22 years is in charge for his final game at home, it’s an occasion that should be marked, and I believe the club will be doing that today. The match programme will be a collector’s item, I’m sure, as will the t-shirts they’re giving out to everybody, but you can’t reduce a legacy like Arsene Wenger’s into collectables.

The manager has given us good times and bad, highs and lows, the ups and downs of football and sport in his time at Arsenal. I don’t need to talk about the frustrations any more, do I? We’ve done that to death down the years, and those things are why we are where we are, and why this game will be his final one at the Emirates stadium.

Today isn’t a day for spite or bitterness or anger. All those things have come before now and the outcome is set in stone. Nothing anyone says or does now will change that. The most strident Wenger Out and the most vociferous Wenger Supporter will make no difference, regardless of how loud they shout. He is going, and this is the last time he will ever pick an Arsenal team and send it out to do the business at home.

If this does nothing for you, fair enough. For me though, I feel something I can’t really explain. I was just going 25 when Arsene Wenger took over as manager of Arsenal. I didn’t expect it to be him, I thought it would be someone else, and maybe it would have been more simple if it was.

I don’t think Johann Cruyff would have done 22 years in charge, even if he’d been hugely successful, but in Wenger we found a man who found a club. He was given the freedom to express his footballing vision from the very start. It would, in time, become something of a millstone, but when it worked oh my goodness how it worked.

The football was brilliant at times, he was a hugely charismatic man but I think what I liked most was his intelligence. There was a decency about him that seemed anathema to football as we were brought up to know it. In all the stores in recent times, in all the tributes, how many times has the Sheffield United story come up?

For those that don’t know, Arsenal didn’t break any rules, but Kanu didn’t understand that when play is stopped for an injury you give the ball back the opponent. We threw it back them, Kanu got the ball, squared to Marc Overmars and he scored to give us a 2-1 win over them in the FA Cup at Highbury.

Steve Bruce was their manger, he threatened to pull his players off the pitch, but Wenger offered a replay. Who ever heard of anything like that before. When Bruce suggested it be played at Bramall Lane, Wenger said, “We want to repair what happened. We want it here. We have a fair spirit but we’re not stupid.”

Wenger has been a huge part of my life for 22 years. We’ve won things, we’ve lost things, he has frustrated the life out of me at times, but at this point – with the end game clear and now so fixed – I just want to remember the good times. I’m excited about what comes next, yet it’s still impossible not to feel sadness and regret about his departure because I wanted him to win more things for us.

When it comes to the Emirates, there have been some great moments, but personally, I can’t look beyond that game against Sp*rs when we scored two goals in minute. We hadn’t finished celebrating the first when Cesc scored the second and I hugged complete strangers because it was as beautiful a 60 seconds as you could ever hope for in football terms.

And over the course of his tenure, I started this website, I do what I do now and it has become such a big part of my life. Wenger has had a huge impact on me personally, I admire him hugely and I will always have huge admiration for what he did for this club and the things he achieved.

I have no interest in the squabbles about whether he’s our greatest manager or not. To each their own. All I know is that in 22 years he’s provided me with some of the most amazing football I’ve ever seen, some of the best players I’ve ever witnessed, and he made Arsenal a force to be reckoned with on many levels.

That’s something, for me at least, that merits appreciation, and I’ll be there today to show that, as trifling as it is in the grand scheme of things. See some of you in the usual place, and let’s hope we can go out at home with an enjoyable win.

Finally for today though, it would be remiss of me not wish Stoke City safe travels on their way down to the Championship. Sing a song about your season having its leg broken, why don’t you. Hope we never see you again. And Shawcross with the mistake that helped send them down?! Glorious. 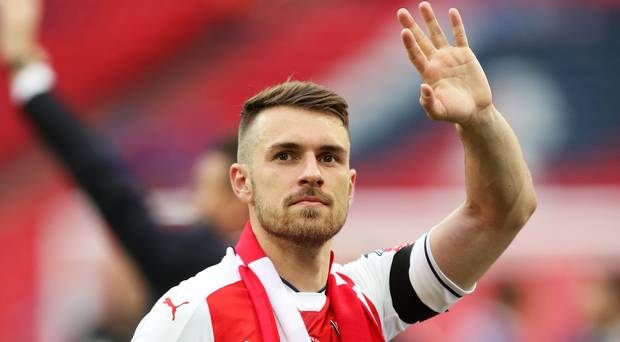