Tactics Column: Laca-space? Who misses out in Arsenal’s new-look attack?

Alexis Sánchez is gone and Arsenal, somehow, have to replace his ability to create and his ability to score. No wonder the club was so adamant that Henrikh Mkhitaryan had to move the other way in any deal – that was half the job done.

The other half was completed on deadline day, with Pierre-Emerick Aubameyang joining from Borussia Dortmund for a club record fee.

I’ve already written about the merits of both players – what they can bring and reasons they might not hit the ground running – you can read my breakdown on Aubameyang here and my take on Mkhitaryan here. Ultimately, though, two does not go into one and somebody is going to end up on the outskirts of the team.

First things first, Aubameyang isn’t a winger. Dortmund tried it when he joined the club and nobody was convinced. His close control isn’t good enough, he rarely dribbles past opponents, and his combination play is far from exceptional.

The Gabonese has to play on the shoulder of the centre-backs, dragging the defence deep or dragging them across the pitch with his movement. The penalty box is where he comes alive – 97 of his 98 Bundesliga goals were scored inside the box and the vast majority of those came in central areas.

If anything, Aubameyang is actually the striker most had expected Alexandre Lacazette to be. Instead of being a poacher who comes alive in the box, the Frenchman has dropped deeper and deeper to receive and hold up the ball and rarely found himself through on goal. If that was the plan all along, you imagine Arsene Wenger may have just stuck with Olivier Giroud as he had in previous summers.

Now that any idea of pushing Aubameyang to the flank in order to accommodate Lacazette is put to bed, can the two play together? They should be able to. The security Lacazette offers on the ball is something Aubameyang actually lacks and the pair would probably strike up a good relationship. Given that he isn’t a player who gets into a lot of scoring positions – certainly not as many as we’d hoped – moving Lacazette to the left would probably mean keeping what he adds to the team while hardly diminishing his goal threat.

If Arsenal continue with the now-favoured 4-3-3, the Frenchman could definitely move to the left. The same applies in the 3-4-2-1 we’d used so often until recent weeks, where Lacazette would offer safety in possession and a second goal threat, taking some of the burden off of Aubameyang’s shoulders.

Lacazette anywhere other than up front is not something we’ve not really seen but it is worth exploring. That’s not so straightforward, though, when the club have just signed Mkhitaryan.

Thankfully, things are easier with the Armenian, who can play on either flank or in the middle of the park. His close control is exceptional and he generally looks to move the ball forward quickly with either a pass or a swift change of direction. It doesn’t matter too much where the Armenian plays as, much like Mesut Ozil, he will tend to pop up in the areas his team-mates need him most. Those two should get along well and we already saw the makings of that at Swansea.

For now, though, Mkhitaryan is most likely to play wide in place of Alex Iwobi as the most to three central midfielders is most likely a ploy to to squeeze Jack Wilshere and Aaron Ramsey into the same side when both are available. Ramsey’s form this season has been terrific and Wilshere’s recent renaissance has proved vital in the Welshman’s absence. Something striking about the Arsenal team sans Alexis is the lack of dribblers, players likely to take an opponent out of the game without a quick one-two but actually with a burst of energy.

It’s something Arsenal lost a lot of with the sale of Alex Oxlade-Chamberlain and possibly another reason we’ve seen Ainsley Maitland-Niles lately: dribbling from wing-back is something our ‘first choice’ defence can’t do, severely limiting our options to shake up an attack. Maitland-Niles has completed 11 dribbles in his nine Premier League appearances (five starts) this season, compared to Sead Kolasinac’s return of six in 18 and Hector Bellerin’s 20 in 25.

Though he’s only played 806 minutes, Wilshere has completed more dribbles (29) in the league than any player still at the club. Next best are Lacazette and Mesut Ozil (both 25) but both players have played more than double Wilshere’s minutes.

At this point, playing all these players feels nigh-on impossible. Ozil has to play, the two new boys have to play, finding a way to use Ramsey and Wilshere together would be huge. There’s simply no space for Lacazette.

It appears likely, then, the 4-3-3 of recent weeks will continue to be used, with Ozil playing a completely free role from the flank, Aubameyang up front, and Mkhitaryan on the left or in place of either Ramsey or Wilshere. Let’s be frank, they probably won’t both be available anyway.

Personally, I would be interested in seeing Mkhitaryan on one wing and Özil centrally in a 4-2-3-1 but that would mean shifting either Ramsey or Wilshere out wide (or to the bench), so it seems unlikely for now.

A back three would still be a good idea in order to protect the defence, as we saw at Swansea. The two centre-backs were constantly dragged into the channels on Tuesday evening and Arsenal had no reply. One pass beyond midfield or one mistake in possession and Swansea almost instantly found themselves attacking two players over and over and over again. 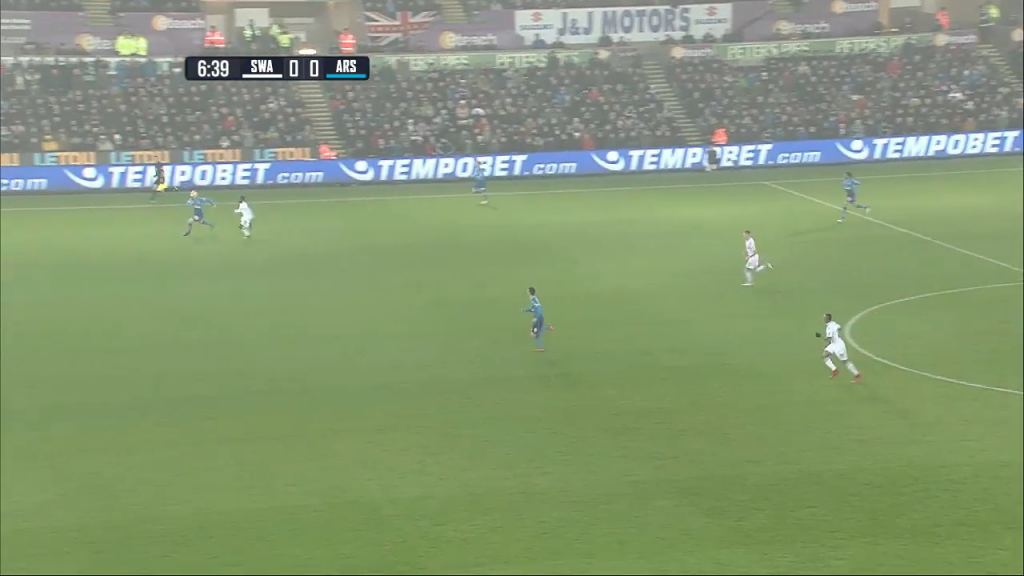 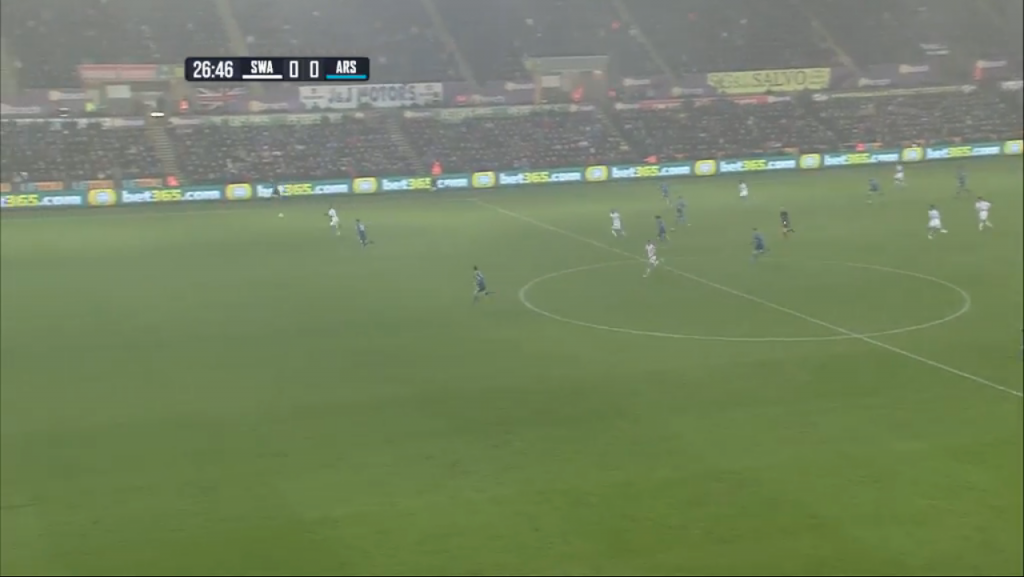 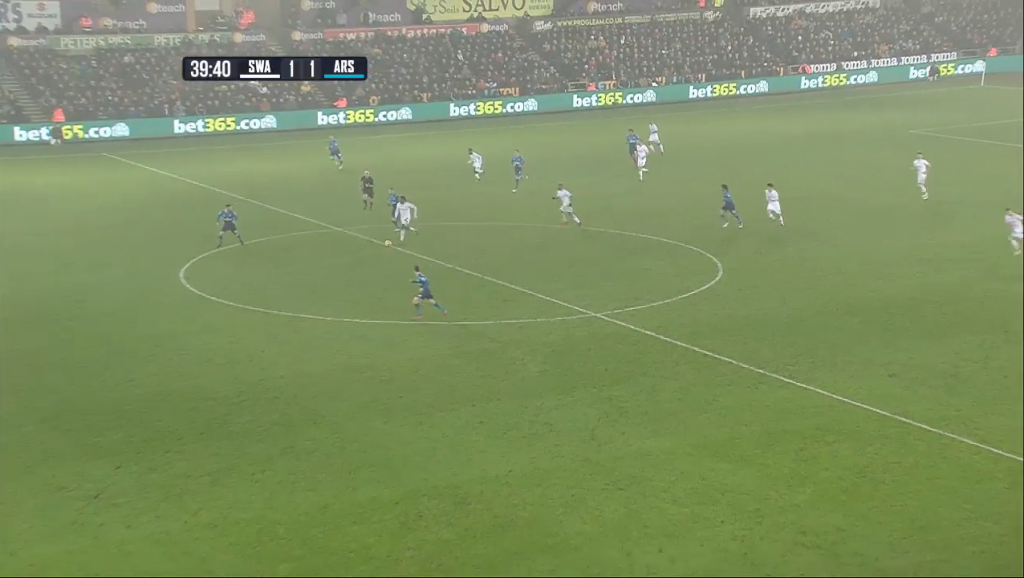 Since the start of last season, Arsenal’s expected goal difference per game is +0.7 with three central defenders and +0.45 when we use a back four (per Understat). We’re far from solid and it’s easy to see why people didn’t think the three-man defence fixed our issues but it did at least do a better job of masking them.

The Swansea game was a perfect example of the dangers of a back four – our centre-midfielders and full-backs push upfield, the centre-halves are dragged into midfield and into wide positions to try and cover the huge spaces.

It doesn’t matter if Arsenal, under Arsene Wenger, use three centre-backs or two – or three centre-midfielders or two, for that matter – the defence will be exposed. If that’s going to be the case anyway, we’re best off having three players in the last line, covering the width of the box and keeping up with the numbers of any counter-attacking onslaught we may find ourselves up against.

Teams are less brave at the Emirates Stadium and our players appear to be much more assured, so perhaps slotting Mkhitaryan and Aubameyang into our home games will be no real problem. Away from home, though, we have won just 30 points from our last 27 Premier League games.

Back when Arsenal won the north London derby in November I suggested it should be a blueprint for away games. No risk at the back, move the ball forward quickly and keep numbers behind it. That hasn’t come to fruition but it’s still almost certainly the best we can make of a bad situation.

For now, it seems 4-3-3 is flavour of the month (it is, after all, the only way to use Ozil, Mkhitaryan, Ramsey, and Wilshere) and that is bad news for Alex Lacazette. He’s become the least undroppable of Arsenal’s guaranteed starters and nine league goals by February is not the return anyone had been hoping for.

Hopefully adding Mkhitaryan to the mix and seeing a midfield contain both Ramsey and Wilshere for the first time in over three years will work out, while Aubameyang will simply do what he does and find the back of the net when his team-mates find him. Arsenal will continue to have defensive performances like at Swansea, so it’s time to hope we find the right balance to blow sides away at the other end.

Previous articleTransfers have changed the attack, but what can we do about midfield?
Next articleArsenal Gentleman’s Weekly Rev- … er … play