Tactics Column: How Arsenal turned the tables in the north London derby

Not for the first time in recent years, the north London derby saw an authoritative, impassioned, intelligent collective performance. The only surprise was that Arsenal were the ones to deliver it. A comfortable 2-0 win showed Arsenal have a lot more to their game than most would wager. 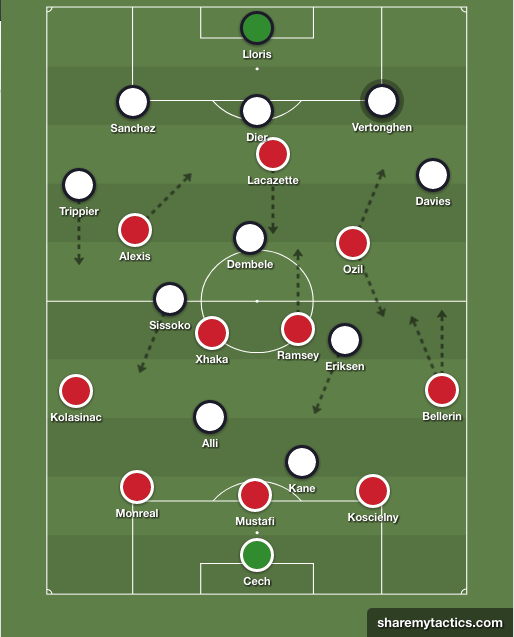 In recent seasons, Arsene Wenger’s side have enjoyed trying to press against possession-based back threes and this was no different. As with Liverpool in 2015 and Chelsea in the FA Cup final, Arsenal were able to press high up the pitch in the man-marking system favoured by Wenger in defence.

With the two sides playing fairly similar systems, it was the small details which decided the ebb and flow of the game.

Arsenal’s front three were naturally in strong positions to press Tottenham, forcing Hugo Lloris to attempt a risky short game or play long. The goalkeeper and his three centre-backs were still determined to play out from the back and practically invited Arsenal to turn the ball over high up the pitch.

The Gunners took no such risks, though: Cech only played 5 passes to his centre-backs and completed just 33% of his passes, compared to a 64% average so far this season. According to Opta, just four of Cech’s 30 passes were played short. For context, 17 of Cech’s 28 passes were played short in the defeat at Anfield and 14 of 27 were ‘short’ passes in the loss to Manchester City before the international break.

With Spurs effectively lining up with two strikers (Harry Kane and Dele Alli) against Arsenal’s back three, it was easier for the Gunners to play out and the back-line effectively switched the ball as soon as possible. Attracting pressure before releasing someone on the other side of the pitch was a common theme and something Arsenal did brilliantly as the players made the pitch as big as possible.

While Arsenal’s back three have received huge praise (and rightly so), it was arguably the wing-back areas where the Gunners were able to dominate. In one v one battles, Hector Bellerin and Sead Kolasinac are simply superior to Ben Davies and Kieran Trippier. And it showed.

The Arsenal duo played higher up the pitch than their counterparts, constantly opening up the pitch for a quick switch of play into space. That was particularly obvious on Bellerin’s side, thanks to the movements of Mesut Ozil and Alexandre Lacazette.

Though Tottenham struggled for access to press aggressively, they retained their high line. Generally speaking, back-lines should retreat when the players in front of them aren’t managing to press the ball, but Tottenham didn’t and Arsenal made the most of it. Alexis and Lacazette both had a lot of joy with darting runs in behind the back-line. The well-known cross field ball into Alexis saw him earn the free-kick for the first goal and Lacazette’s well-timed run saw him lay on the second.

It was the second goal that truly encapsulated where Arsenal were at their most dangerous in the first half as Ben Davies struggled defensively. Ozil and Lacazette would constantly position themselves to the right of the pitch, just inside Davies. With two huge threats in proximity, the Welshman found himself dragged centrally, giving Bellerin the freedom of the flank.

Lacazette in particular sat on Vertonghen’s shoulder and threatened to make peeling runs behind Davies. While Tottenham were worried about the striker heading behind them, Mesut Ozil was happy to drift inside at every opportunity, making himself open and available. The pair threatened the left side of the Spurs defence in both directions, taking all the attention away from Bellerin and opening up the space for him to thrive.

The game’s biggest chance before the opener was created through the positioning of Ozil and Lacezette. With the striker on the shoulder of Vertonghen, the Belgian can’t move out and push Davies across to cover Bellerin. Worried about Ramsey playing the ball in to Ozil, the left-back is pinned inside and can’t track Bellerin’s run. 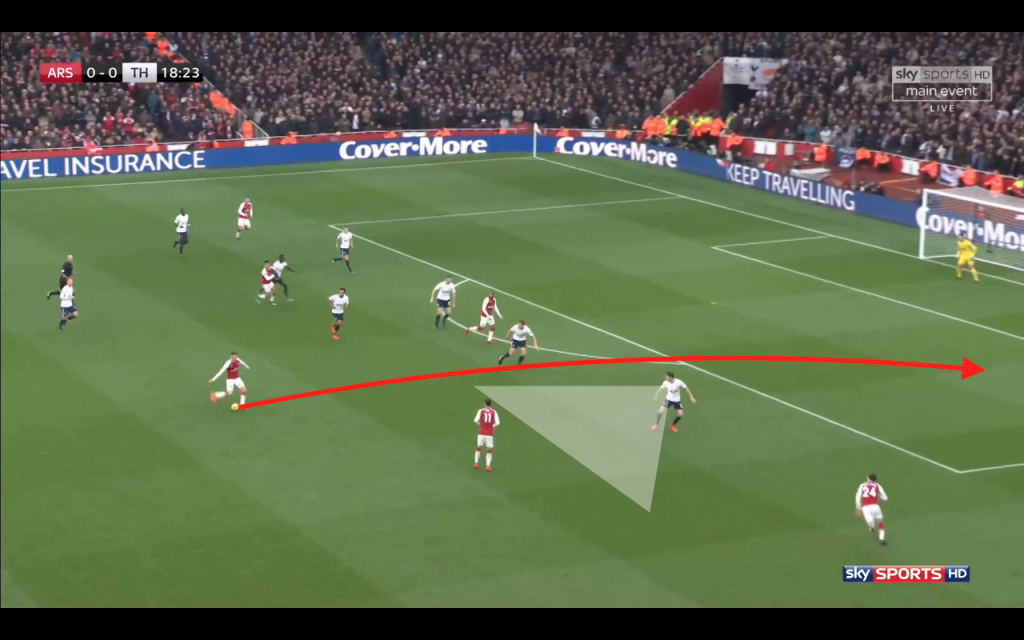 As well as playing direct, Arsenal’s best early opportunities came like this, as they made the pitch wide and moved the ball across the pitch quickly.

On the other side of the pitch, Sead Kolasinac was less adventurous but just as solid as ever. Kieran Trippier has a fantastic ability to deliver the ball but is athletically and technically lacking compared to wing-backs at most top clubs. To help him, Moussa Sissoko drifted to the right wing from his central position.

That, however, didn’t have much of an impact. Kolasinac dealt with the threat well and Sissoko’s predisposition to drive into the channels meant Tottenham lost their man advantage in the middle of the pitch, playing into Arsenal’s hands entirely.

As Arsenal’s wide defenders were so much more explosive, Sissoko’s role made sense but it saw Spurs sacrifice the area of the pitch where they had the numerical advantage.

With so much written about the front three already, that just leaves the midfield. In an incredibly rare event, Aaron Ramsey’s average touches was deeper than Granit Xhaka’s – playing with such a dangerous front three meant the Welshman wasn’t required to make lung-busting runs as a goal threat. Instead, he could focus more on his duties in backing up the front three as they pressed and dropping back to help Xhaka launch counter-attacks.

The Swiss was also brilliant. So often susceptible to pressing, he played more first-time passes than he usually does, happy to move the ball far more quickly. With Arsenal’s defenders not putting Xhaka under as much pressure and the 25-year-old not being tempted into turning on the ball, there was a low-risk approach to build-up play. It’s notable the Swiss completed more dribbles than any other Premier League game so far this season.

Thanks to a two-goal lead at the break, Arsenal’s wing-backs were a bit more reserved after half-time. The same can be said for the rest of the side too. Not for the first time, a good lead in a big home game allowed the team to dig in and pick their moments to attack. They did exactly that and did it excellently: with our talent on the break, a third goal was never out of the question.

The more minor details aside, Arsenal were simply a bit more sensible than they tend to be in the bigger matches. There were no risks from the back-line and goalkeeper in possession, Aaron Ramsey and Granit Xhaka kept their discipline, and the wing-backs chose their moments to drive forward. For once, Arsenal outnumbered and negotiated the opposition’s pressing structures and weren’t averse to playing a safe long ball on a regular basis.

Mauricio Pochettino’s selection can be questioned, as he played Mousa Dembele as a lone holding player. The Belgian’s greatest asset is his ability to escape pressure and drive with the ball, rather than taking up positions out of possession to help the defence play around Arsenal’s press (something Harry Winks excels at). It also would’ve been wise to line play Eriksen and Alli behind Kane as a dual threat, matching Arsenal’s formation exactly.

It was also surprising not to see the Argentine shift to a back four, which Arsenal often struggle with when they attempt to press. Eriksen’s positioning in a deeper role suggests he expected Ramsey to play more adventurously but that wasn’t the case and Arsenal effectively nullified Tottenham’s ability to win the ball high up the pitch or launch counter-attacks at breakneck speed.

Spurs were a little better when Winks was introduced and Arsenal replaced Alexandre Lacazette with Francis Coquelin. There were shaky moments but nothing more as the defence stood firm. If anything, Arsenal’s quality on the break meant the hosts remained the more likely to score the game’s third goal.

However, this performance should be used as a blueprint to fix an ailing away record. So far this season, the team have won just four points in six away games. If Arsenal avoid taking risks and opt to play with the discipline, intelligence, and intensity that won them the north London derby, that record away from home against more modest opponents should soon improve.

Previous articleArsecast Extra Episode 201 – 20.11.2017
Next articleSven Mislintat arrival part of a much needed backroom restructuring + the Arses are back!