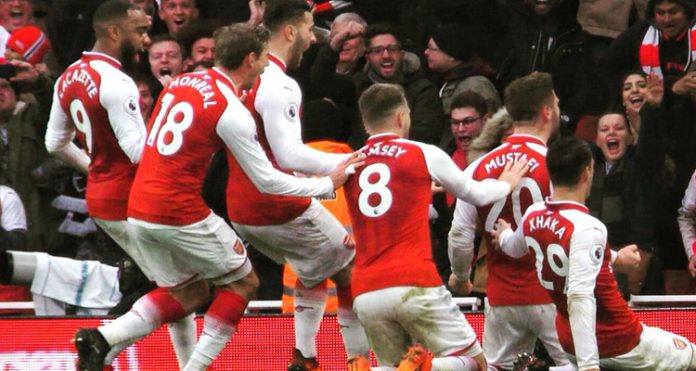 There are mornings when the prospect of writing a blog about Arsenal is not the most enjoyable thing you can think of. I think it’s fair to say that this morning is not one of those mornings.

All the talk pre-game was of how good Sp*rs are, how their manager is super cool and groovy, and how Dele Alli and Harry Kane were the best thing to ever happen to football in England except for England when they cried off with fake injuries so they could be fresh and ready for the North London derby. How did that work out for you chaps?

I have to admit that one of the best things about yesterday, result and impressive Arsenal performance aside, was the fact that both of them did precisely nothing of note during the game and when they were hauled off with 15 minutes to go they reminded me of wet dogs. You know you see a dog with all his fur and he’s an impressive looking beast? Watching him making his way out of a lake, bedraggled and soaked to the skin, he doesn’t make quite the same impression, and that was Kane and Alli yesterday.

I actually feel a bit bad about that comparison because dogs are awesome and I wouldn’t take either of those wankpots for a walk if they were the last companions on earth, but you know what I mean.

The thing is that we kept them quiet, so very, very quiet. I know much has been made of the performance of Mesut Ozil and that’s something I understand because he had an outstanding game, but for me the heroes of yesterday were the back three. If we rejoice in the fact that Sp*rs were not a threat, it’s down to the way we defended, and as a unit they were superb.

Laurent Koscielny got his head or foot to everything; Nacho Monreal remains the most underrated player in the Premier League and put in another no-nonsense, quietly brilliant display; while the recalled Shkodran Mustafi was my man of the match. I’ve had some issues with him in the past, but consider my cap well and truly doffed this morning. Not only did he make 14 clearances, lots of tackles, and spend most of the game up Kane’s arse, he provided a fantastic defensive moment when he used his powers of sliding for good, blocking a shot by the striker when it opened up for him in the box.

What we did further forward was excellent, but it was all built off the platform of the defence, ably assisted by the wing-backs and the midfield. Petr Cech had little to do but when called into action he produced a phenomenal save from an Eric Dier header to ensure we kept our two goal lead and a clean sheet.

So, our goals. I hear them crying over the first. Boo hoo, and hahaha, is what I have to say. There was an earlier incident when the referee gave them a free kick for very little and it would have seen Ozil set-up Lacazette for a tap-in, and perhaps there wasn’t much in the Sanchez on Sanchez foul but despite having 15 years of writing this website under my belt, I don’t have the words to explain how little of a shit I give that the decision was a bit soft.

However much of a shit you think I give about that, triple it and add four hundred bazillion on top for the suggestion that Mustafi was offside when he planted a brilliant header in off the post. Having seen us suffer at Man City because of a terrible decision, and lose at Stoke when Lacazette’s goal was ruled out because he had pube ahead of the last defender or something, it’s very much a case of what goes around comes around. Suck it up.

Before they even had the chance to consider how they were going to cry to their friends in the media about how unfair life was, we scored again. Bellerin set Lacazette behind the defence – again a suggestion of offside and again I would ask you to think of a number larger than infinity to represent my shit giving – he crossed it for Alexis who took a couple of touches and blasted into the net above Lloris who was demonstrating his incredible powers of falling backwards for no reason.

It meant a 2-0 lead at half-time, and I recall being at a derby a few years back when we had the same scoreline at the break and then had a second half nightmare in which Younes Kaboul scored and they went on to win and that was very unpleasant indeed. I hope they remembered that though, clinging to it like some kind of lifeline, because there was to be no repeat.

We worked hard, defended well, and I think we had the best chances to score again. Lloris made some saves, we missed some chances, we let them have the ball and counter-attacked well at times, but the removal of Kane and Alli was basically a white flag and it spoke volumes about the way we played.

There’s no doubt we deserved the three points, and for me the fact we had a stable platform to play our attacking football was key. Ozil was absolutely brilliant, playing like a man with a point to prove, and there’s a lot to like about him winning the ball back on the edge of our box and setting off on a blistering counter which he almost finished off, but the security provided by Koscielny, Mustafi and Monreal played a massive part.

I think we played with purpose, good concentration, the desire to always be efficient and with great solidarity. From the first to last minute the quality of our concentration was very high, we never had a minute where we felt that we dropped a little bit of our focus. Overall it was a very intense game when you look at the physical performance of the two teams. It’s absolutely through the roof, so that means the with the distances the players produced, it was an immense performance on both sides.

We could sit here this morning and ask ‘Why don’t we see that every week?’, and I get it. If this is what these players are capable of against a team like Sp*rs it’s what they should be capable of in every game. That kind of effort and concentration would mean more points on the board, no question, but I’ve lost count of how many times I’ve written the ‘This should be the blueprint’ post on this website.

It’s so blindingly obvious that I don’t want to go there this morning. I just want to enjoy the fact we won yesterday, and won so well. Enjoy the fact the gap between rubbish old us and brilliant exciting Sp*rs is now just one point. And enjoy a derby win for the first time since 2014.

I hope that these players take as much from the game as they should. It ought to remind them what they can do, provide them with a boost in confidence and belief, and show them that if they stay focused and organised and work hard for 90 minutes, they can win difficult games.

As I said a few weeks back, we need to basically ignore Man City as they romp towards the title, and look at what’s going on around us. Yesterday was evidence that our team is good enough to compete with the others aiming to finish top four, and hopefully we’ll see more of that – not least because we face Man Utd later this month.

Before that, however, we have the obstacle of two away games – and our record on the road this season needs to be corrected. Going into those games on the back of this win is far preferable than fire-fighting another big game defeat. If we can do what we do at home, there’s no reason why we can’t do it away.

For now though, I’m going to download the game. I’m gonna watch bits of again, and I’m going to love it as much as I loved it yesterday. Have a great Sunday, back tomorrow with more and, of course, an Arsecast Extra on what is definitely going to be a goodly morning.