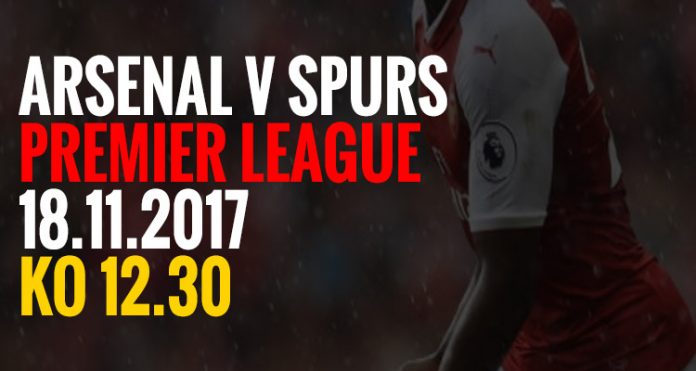 Welcome to North London derby day everyone. It’s a massive game today, not simply because of the opposition, but also the circumstances.

Currently Sp*rs lie third in the table, level with Manchester United and with 23 points. Arsenal ‘languish’ in sixth, with 19 points – the same as Burnley and Liverpool. A win today would cut that gap to a single point, and from there you just never how the trajectory of our season might change.

I’m not here this morning to blow smoke up their arse, but as unpalatable as it might be we can recognise the fact they’re a very good side, well organised, hard to break down, and with one of the most annoying strikers in the world. I say annoying because he scores against us all the time, and that wrecks my head.

It means that we have to be well and truly on it today. Arsene Wenger says:

Tottenham are a good side but we have the quality to win this game. We have no fear; we are focused on nullifying their strong points and expressing our strong points.

No arguments with that attitude. Our home record is good, you have to go back to last January to find our last league defeat at the Emirates (2-1 to Watford), and on derby day the old cliche about form going out the window has been applicable more often than not. The occasion becomes an equaliser.

Assuming there’s no formation change, and the manager doesn’t do something crazy like try and bolster our midfield with an extra man to give us more security and control over the key area of the pitch, the only selection decision I see him wrestling with is who plays in the back three.

Shkodran Mustafi is back in training and could return, while Per Mertesacker is the other option. A big game, plenty of experience, a man who understands the derby as well as anyone in the team, I’d be inclined to go with the latter but I would understand the former as well.

Calls for Jack Wilshere’s involvement are made partly because for a fixture like this his battling qualities would be useful. Jack knows what it means against that lot, but it would require a shift of formation – either a back four, or a five man midfield meaning one of the front three misses out, and I can’t see Wenger doing that on a day when he’s talking about expressing our strong points.

While they are defensively strong, a front three of Alexandre Lacazette, Mesut Ozil and Alexis Sanchez is the best we’ve got. It’s dynamic, it’s got creativity, finishing, and in Sanchez a player who can, on his day, pull something special out of the hat and very often those are the moments that win big games.

We need them to click the way they did at Goodison Park a few weeks, which means they’re going to have to work really hard because Sp*rs won’t be anywhere near as accommodating as Everton were. Hopefully there’s a focus on the collective and we don’t see quite as much wasteful individualism as we did against Man City in our last game.

Just behind them though, midfield will be crucial, and Aaron Ramsey and Granit Xhaka have to remain close to each other throughout. Too often we leave the Swiss international isolated, without the support he needs, and if we leave gaps you can be sure they’ll exploit them. Our strength is in our attack but it doesn’t mean we have to go gung-ho from the start. Show some discipline and organisation in midfield, make life difficult for them when they have it, and then look to hurt them when we win it back.

Whether we can stop them scoring is a big question, I’m not entirely confident that we can, so the efficiency Wenger talked about in his press conference the other day will be crucial – when the chances come we have to take them. Yet on derby day, for all the analysis of team selection, tactical set-ups and everything else, there’s something intangible that plays a part.

We have no measure for ‘wanting it’, or ‘passion’, but there are big questions about this Arsenal team and this manager at the moment, and today provides an opportunity to answer some of them. We all know the stories of derbies from days gone by, just listen to Ian Wright on the Arsecast this week talk of a terrifying Tony Adams in the few minutes before kick off and, whether we can quantify it or not, desire and a will not to be beaten plays a part in these kind of fixtures.

Regardless of any other divisions or opinions, there’s one thing that Arsenal fans will unite over, and that is the need to beat Sp*rs in the derby. The crowd will be up for it, there’s no doubt about that, and the team need to show that they are too. Last season’s home game was a weirdly tepid affair, it had none of the bite you expect from a North London derby, and it played out to a unsatisfying 1-1 draw.

I think we need more than that today, although it’s a game which has produced plenty of draws down the years. A win could do so much for the way we think about this team this season, and it could do a lot for them as well in terms of confidence and belief for these big games.

We all know what we want to see. We want to see players who know what it means, who care, and who will run that extra yard to make the tackle or get on the end of a cross. The love-in over Sp*rs, who have won nothing in years, means the spotlight is on them so let’s hope we leave them in the dark at the end of the 90 minutes.

There’s still time to catch Ian Wright’s passion and the calm analysis of Clive Palmer pre-game in this week’s podcast. Listen below, it’s good luck to listen on the morning of a derby! Catch you later for the game, and we’ll have all the post match stuff over on Arseblog News.

Laying down the law