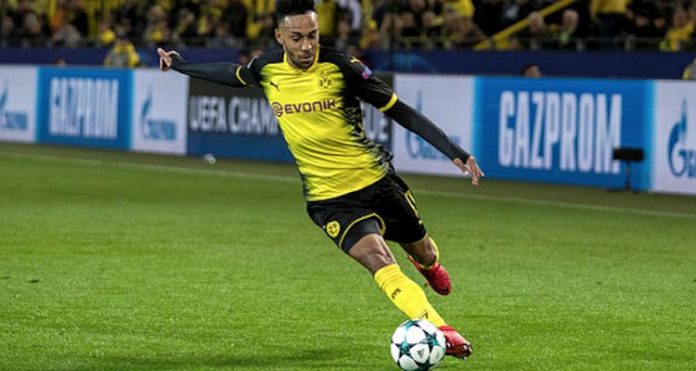 Since moving to Germany in 2013, he’s scored 141 times in 212 appearances for Dortmund. Even more amazingly, he’s netted 116 in 139 since the club started to use him as a striker. Gerd Müller is the only player in the history of the Bundesliga with a better minutes per goal ratio. Aubameyang, like Robert Lewandowski, has a goal every 115 minutes in his Bundesliga career.

Despite all that, there are valid doubts over the signing. A fee would be big, the Gabonese turns 29 in the summer and has a game largely involving his speed and will need to fit in right away. He would almost definitely bring goals to an Arsenal side badly in need of them but would he bring enough to be worth a deal that – if it doesn’t work out – could leave the club with a big, costly albatross hanging from its neck?

Obviously goals are the reason you buy Aubameyang, so let’s start there. He is not wasteful, as some would have you believe, and he is not prolific, as his goalscoring record suggests. Actually, he’s about average but he clearly makes it work by getting on the end of so many moves.

“How can one of the top scorers in the Premier League this season be bad at shooting? The answer, in the end, is deceptively simple: Shooting ability matters less than we tend to think it does. As Raheem Sterling has illustrated, being a top goal scorer is less about taking the chances, and much more about getting them in the first place.”

Aubameyang’s finishing really is about the average you would expect – a number of chipped goals per season show he can be cool and there’s definitely a confidence in front of goal but he misses his fair share too. That hasn’t mattered in recent years because he gets so many brilliant chances that he makes up for those he misses.

At 28, there is validity to the idea Aubameyang’s abilities will wane in the near future as he loses his pace. Jamie Vardy (31) is still showing that speed can hang around a little longer than we think. Though he didn’t battle through the league system as Vardy did, Aubameyang was a similarly late bloomer, sent on various loans during his early 20s and failing to hit any notable heights until he turned 22. Even then he scored semi-regularly with Saint-Étienne. He may not be as prolific in three years as he is now but there’s currently nothing to suggest his output is set to fall off a cliff.

Either way, to put Aubameyang’s ability to get through on goal down to his pace alone is insulting. Sharp, intelligent movement in the box is truly the key and something Arsenal have not seen probably since Robin van Persie left the club. It’s regularly mentioned that a lot of his goals for Dortmund are tap-ins but he isn’t given enough credit for getting himself into such brilliant positions.

A burst of speed over the first few yards certainly helps but it’s an ability to create space for himself that sees Aubameyang score so often. Whether he’s peeling away to the back post off a defender’s shoulder, or moving towards the near post only to dart back into the space created, the so-called tap-ins are regularly earned, rather than gifted.

A goal from last season against Freiburg – seen at 5:57 of the video below – is a great example of what I mean.

The issue here is whether or not Arsenal can play to his strengths. The Gunners will need to regularly feed Aubameyang if they are to see him offer anything close to the return he has managed in recent seasons at Dortmund, where a more tactically inclined offensive setup was geared towards creating good chances for him.

There are, of course, limitations to Aubameyang’s game. And plenty of them. Despite his pace he isn’t the cleanest dribbler, thanks to his average close control. His height (at 6’2” he’s marginally taller than Robert Lewandowski and Edinson Cavani – not what you expect from such a quick striker) means it isn’t easy to swiftly change direction with the ball at his feet.

The close control becomes an even bigger issue if he is to be used like Alexandre Lacazette or Olivier Giroud, players who hold the ball up and link play excellently. Aubameyang will be on the end of moves but hoping he can help build them is extremely optimistic and makes you wonder if he will become stuck on an island when Arsenal are struggling.

A potential partnership with Alexandre Lacazette does ease that concern. Since joining, we’ve seen that Lacazette is excellent at keeping hold of possession and bringing others into play.

It may even suit Arsenal to have someone who is mainly interested in getting further forward leading the line. There’s a genuine worry that it would leave midfield and attack disjointed but Aubameyang’s front-foot focus will push defenders back, creating more space for Lacazette or (fingers crossed) Mesut Ozil or (possibly) Henrikh Mkhitaryan to keep the ball and orchestrate moves.

Likewise, it can work the other way. As the duo mentioned above become more influential in setting up attacks, they may well drag attention towards them and leave Aubameyang with more spaces to exploit beyond the defence.

It’s likely – if a deal is completed – Aubameyang would be what many fans expected from Lacazette in the summer: a fast striker who does a lot in the box but little outside of it.

Off the pitch there are yet more concerns and, again, they’re valid. Aubameyang’s time at Dortmund has hardly been a smooth one throughout and the club banned him from the squad last weekend for the third time in a year. There have been no serious offences but it remains something to take into consideration.

The first misdemeanour saw Aubameyang sit out a Champions League knockout game after he had flown to Milan on a day off without the club’s permission. Nothing serious but taking private flights to a birthday party is something you really should run by your club first.

Earlier this season, the striker missed an away game against Stuttgart after inviting a film crew to the club’s training ground without permission. And then there was last weekend when Aubameyang – already apparently angling for a transfer – ‘forgot’ show up to an important team meeting called by head coach Peter Stoger.

That is what caused a furious response within the club, with even his greatest admirers admitting it was a step too far:

“At some point you can’t tolerate it [lack of discipline from Aubameyang] anymore,” said sporting director Michael Zorc.

“I don’t know what’s going on inside his head. We had a very contentious discussion today. We’re not used to this behaviour from him. It can’t go on like this.”

In the striker’s defence, he may have been affected by what he perceived to be a racially-motivated attack from a German journalist (explained here) but the entire situation only underlined an increasing unwillingness to co-operate.

Despite that, there are no dressing room issues like the ones Alexis Sánchez has reportedly had with his team-mates. Throughout the squad, Aubameyang is incredibly welcome and at home, thanks to a happy-go-lucky attitude. By all accounts he has worked hard and acted as a true professional during the majority of his time in Germany.

In fact, for a man with such loud fashion choices, gymnastic celebrations flashy haircuts, diamond-encrusted boots, and a gold car, he is actually relatively reserved, fairly quiet and humble. A number of French speakers at Arsenal will see him welcomed immediately and the supposed ill-temperament should not become an issue.

Aubameyang’s limitations and the furore surround his behaviour certainly mean a deal might not work out. Arsenal could fail to create for him, completely blunting the main thing he excels at. Or it could all click and Arsenal suddenly have a 30-goal a season player, albeit an expensive one likely to already be at the very end of his peak.

It’s a big and expensive risk for a 28-year-old striker but it’s easy to see why Arsenal are willing to take it.