Morning all, it’s still about transfers, and the Alexis Sanchez situation remains the most complicated and irritating, so let’s start somewhere else. 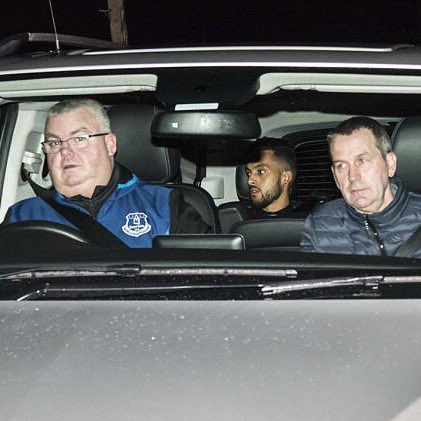 Theo Walcott went to Merseyside yesterday to have a medical with Everton. Here he is in the car with some Everton people on his way to have the medical or after the medical. Either way, medicine was done to him and I assume that everything went ok. A fee of around £20m, possibly rising to £25m, is being mentioned and I suspect that’s a deal that will go through at some point today.

It’s a good deal for both parties really. For Walcott it’s a chance to get regular first team football from a manager who is prepared to use him in the Premier League. There’s a World Cup this summer and at this point he’s so far away from the England team, and so far away from the Arsenal first team, that his chances of making it into Gareth Southgate’s squad are negligible.

He’s got a lot to do to work his way back into it, but at least if he’s playing week in, week out, he’s got a chance. It feels like a move that’s overdue for Walcott. I know he got 19 goals last season, but his career has basically been in flux since he demanded to be a striker, was given a chance as a striker, then changed his mind and decided he wanted to be a right winger again.

For Arsenal it’s money for a player we barely use these days, and £120,000 a week off the wage bill to redistribute as we see fit. Whether that’s to help attract new signings or to convince existing squad members their future should be spent with us is up to the manager, but it’s a substantial chunk of money. When you add that to the wages saved with Coquelin’s departure, we’ll have shaved circa £200,000 off the payroll and brought in over £30m in fees. You can do plenty with that if you have a mind to.

At this point – and I realise how quickly things can change with one update – the one likliest to arrive is Pierre-Emerick Aubameyang from Borussia Dortmund. From what we know Arsenal are still to make an official bid to the German side, although personal terms have been discussed between club and player.

There are suggestions we might use Olivier Giroud as part of the deal. He’s someone they were very interested in during the summer, but he chose to stay at Arsenal, so it does make some sense. However, you have to question whether we can afford to shuffle our pack that much. Losing Alexis Sanchez, Theo Walcott and Olivier Giroud in one window is a massive shake-up, particularly when it feels like there’s an element of us making all this up as we go along.

Nevertheless, it look as if the pursuit of Aubameyang is serious, and if you’d like to know a bit more about him as a player, his situation at Dortmund – including his disciplinary issues – and what Arsenal could expect from him, check out this excellent profile by our tactics columnist Lewis Ambrose. His goalscoring record really is superb, but the one thing that would give you pause for that is that he’s a finisher, and at this moment in time our biggest attacking problem is that we don’t create enough chances for our existing finisher – Alexandre Lacazette.

Perhaps that goes some way to explain why we’re so keen on taking Henrikh Mkhitaryan (still in copy and paste mode with his name) from Manchester United as part of the ongoing Alexis Sanchez saga. On the one hand I have serious reservations about him having struggled so badly there. I know everyone points to his Bundesliga record as a marker of his quality, and I get that. They also point to the way Mourinho often singles out individuals for poor treatment, his Scapegoats for Destruction that he uses to impose his ‘authority’ on his squad.

At the same time though, we have a player who will be 29 in a few days time, who is a slightly fey, ethereal creative midfielder who might be accused of needing his porridge to be juuuuuust right for him to thrive. Sounds a bit familiar, eh? I think we’ve got one of those already, and I’m not sure you can carry two of them.

Maybe it would speak to some longer-term thinking because as yet Mesut Ozil still hasn’t signed a new deal and should he leave in the summer – potentially to United! – we’d need someone to help fill that gap/step up and take over that creative responsibility. Yet the idea that our planning right now is anything other than short-term and reactive is difficult to escape.

All we can do is wait and see what happens. Mkhitaryan’s agent, Mino Raiola, said yesterday that Sanchez would not go to United unless his client went the other way. This is an agent who is expert at getting what he wants for his players, and what it appears to be is a big pay off from United, a healthy chunk of cash for himself for facilitating the deal, and a lovely salary package and personal terms for ‘Mikhi’.

Because of all that it might end up as a straight swap deal with Sanchez ending up there and Mkhitaryan ending up here, and however you want to dress it up, I can’t feel anything but a bit underwhelmed by it. Maybe it’ll be like one of those movies you think is going to be a bit crap when you sit down to watch it and end up pleasantly surprised, but that’s just how I feel about it.

Meanwhile, a BBC correspondent posted a Tweet about a new deal that is apparently on offer to Jack Wilshere:

Understand Arsenal have offered a new deal to Jack Wilshere. The offer is less money than his current deal but it's heavily incentivised. #AFC

It tallies with some of the whispers surrounding him over the last number of weeks, and on one hand you can see the sense of it. His injury record and his physical issues are such that you can see why the club would go down that road. If he stays fit, available and plays regularly then he’ll make up for the shortfall in the basic salary.

However, it’s a risky game to play with someone who has less than 6 months left on their current deal. It’s playing on his love of the club and his loyalty – neither of which I have any doubts about – but as we’ve seen in the past those are things which can very easily be thrown by the wayside if a player doesn’t feel like they’re reciprocated or, simply, if better terms are on offer elsewhere.

Wilshere understands his situation as well as anybody, and if someone else came in with a better offer – something many clubs would be able to do due to his availability on a Bosman this summer – he may well be tempted. I hope he stays, his performances have merited a new contract, but Arsenal’s stance on this is, while understandable, one which could easily backfire.

Finally for today, what Arsene Wenger said to Mike Dean emerged yesterday. If this is worthy of a three match ban – with the official trying to goad him into calling him a cheat – there’s something very wrong with that disciplinary system. Particularly as Dean faced no sanction for his terrible error in the West Brom game.

Right, that’s your lot for this morning. All the latest on transfers and all the other news throughout the day on Arseblog News.

Previous articleWhy do Arsenal want Aubameyang, what can he offer and how risky is it?
Next articleTheo Walcott joins Everton + the latest on Aubameyang