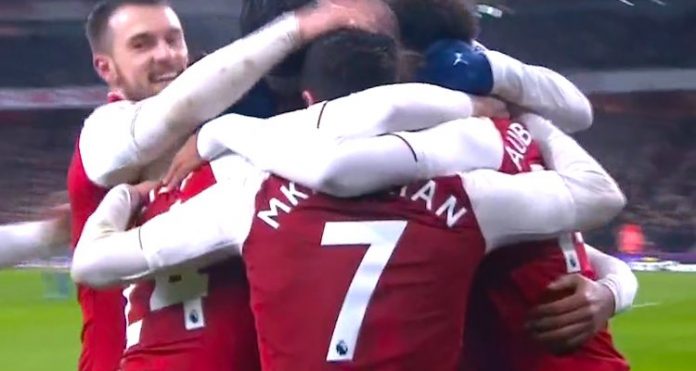 For the second time this season Arsenal stuck five goals past Everton in the Premier League. The last time it got their manager the sack, this time it simply sparked Sam Allardyce into a tantrum where he blamed his players for not carrying out instructions, probably to distract everyone from the fact he’d called Arsenal defensively weak beforehand and then had to watch his team defend like drunkards on ice. And by ice, I mean meth. But also on actual slippy ice.

Arsene Wenger started with Henrikh Mkhitaryan and Pierre-Emerick Aubameyang, looking for his two new signings to spark some attacking life back into the side, and he was certainly rewarded. The two combined beautifully in the 6th minute, sending the Armenian in behind and his first time cross was stuck away from close range by Aaron Ramsey.

A corner, flicked on by Steve Bould and finished at the back post by Laurent Koscielny doubled the lead, and had the Frenchman not put it away, Aubameyang was loitering with intent and would have made sure.

Update: I actually meant to say Mustafi flicked it on like Steve Bould, but early morning mind mush made it come out like that. I like it though.

Good work from Iwobi and Ozil saw the Nigerian set up Ramsey, and while there was an element of good fortune to the deflection, I choose to think – much like Nacho Monreal against Chelsea the other week – he played for it, skidding a shot off Mangala’s arse which wrong-footed the keeper and flew into the net.

3-0 up after 19 minutes and Everton tried to hit back through Theo Walcott who was denied by a sensational Mustafi block. Ozil provided us a vision of the future when he played Aubameyang in behind and to see an Arsenal striker race towards goal with the opposition going full pelt behind him and not catching him was like a flashback to days of yore when Thierry Henry did exactly the same. Sadly the keeper saved with his feet, but Aubameyang didn’t have to wait long for his goal.

Sure, he might have been offside, but as Arsenal fans we’ve learned that this season offside is a fluid concept which doesn’t mean what we thought it meant, so to be on the right end of one of those was very welcome. It was that combination we were all hoping to see, Mkhitaryan to Aubameyang, and the finish … oooof, really quite delicious indeed.

So, 4-0 at half-time, and much like in the Crystal Palace game it, understandably, went a bit flat for us after that. Everton obviously got a Big Sam bollocking at half-time, I suspect as a punishment he might have even shown them his bollocks, so they were a little more energised and up for it. Theo Walcott was probably their most dangerous player but he was taken off and Dominic Calvert-Lewin game on and promptly scored a goal which denied Petr Cech his 200th clean sheet.

I have visions of watching Arsenal in 2034, an injury crisis has forced Arsene Wenger to call on the former Czech international, and with a gutsy display for a man who had retired 15 years previously and now has to wear headgear the size of a stetson, he finally gets to 200 by saving a penalty.

The Arsenal keeper had been hurt earlier in a clash with Oumar Niasse, and once the goal went in decided he didn’t need to play through the pain so David Ospina came on. He had almost nothing to do for the rest of the game, and as Aaron Ramsey was about to be taken off he completed his hat-trick.

It was fitting that his third goal came from Mkhitaryan’s third assist, and of all of the goals he set up, I liked this one the most. Not because there was anything particularly complicated about it. In fact, it was the simplicity I enjoyed because having won the ball he looked up, saw Ramsey and just played him the perfect pass which the Welshman made no mistake from. It was precision football, and the quality of the pass in the final third is so often the difference between a good chance being taken or going begging.

Ramsey came off, Wilshere came on, and at that point it was done and dusted. Allardyce’s defensive glass house was in bits because of all the stones he’d thrown, and Arsenal had enjoyed another good day at home, a couple of excellent debuts, and all around the pitch there were players who performed well.

Ramsey, Mkhitaryan and Aubameyang’s goal made them stand out, but beforehand there were some worries about the midfield and the team selection. Granit Xhaka might have found himself on the bench had Jack Wlshere not been ill all week, but he put in a very solid performance – one that was badly needed for him and the team.

So too did Alex Iwobi who I thought contributed really well to the way we played, particularly in the first half. I was pleased to see it because he has been the brunt of some criticism lately, but I think since that incident a few weeks ago he’s got his head down, worked hard, looked stronger and fitter, and while he wasn’t great at Swansea, that was true of everyone, not just him.

In the first half we were quick, mobile, technically very sharp and we finished very well as well. Overall, the two new players integrated well into our game and they looked as if they had played for us forever. Our challenge, I think, is to find the balance. We are a very offensive team, we want to play that kind of football, but we have to find the balance between attacking and defending and that will certainly be our challenge between now and the end of the season.

I’m not going to say defending is an afterthought or anything like it, but this morning it’s hard not to focus on the other end of the pitch, and what we saw yesterday was really encouraging. For a player to get three assists on his home debut is really something, Aubameyang was quieter in general but showed what he’s about – both with his pace and his finishing – while Ramsey’s hat-trick is very welcome.

In January we lost three players who scored 60% of our goals last season, So, while Aubameyang and Mkhitaryan are excellent additions, we need more from other areas of the pitch too, and we know that Ramsey is more than capable of getting goals from midfield. That takes him to six for the season, with Wenger looking for 10-15, and maybe with the way the attacking dynamic has changed he can get that.

Make no mistake, we are now a different team going forward than we were with Alexis. I’m not dismissing what he did for us or anything like it, but it’s very clear that we’re not going to play the same way with the new players we’ve added to the side. There was more pace to our movement, more zip to our passing, better movement, and Everton just could not cope.

It’s early days, but it augurs well and there was an awful lot to enjoy about yesterday. That’s been in short supply in recent times, so take some time to bask in that today, and I’ll be back tomorrow with more and an Arsecast Extra.