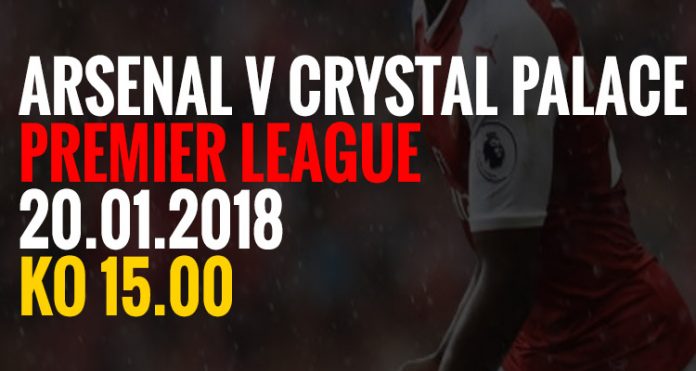 In disappointing news, the transfer speculation frenzy has been interrupted by a so-called game of football today. Arsenal will have to put all the fun stuff aside to kick a ball around the pitch against some other lads, but hopefully we can get back to the really important stuff straight after.

It’s Crystal Palace today, a game that comes just a few weeks after we faced them at Selhurst Park and won 3-2. That evening we were indebted to the quality and potency of Alexis Sanchez who scored twice, and at the time we didn’t realise those would be his last goals for the club.

The Chilean will not play today because of everything that’s going on, and Arsene Wenger has to think carefully about what kind of team he sends out today. The good news is that we should probably have Mesut Ozil and Aaron Ramsey back, two players who can make a contribution in the final third and it would be fair to say we could use that at this moment in time.

Last weekend’s front three of Alexandre Lacazette, Danny Welbeck, and Alex Iwobi, are far from prolific at this moment in time. Although Iwobi provided the assist for Hector Bellerin in the defeat to Bournemouth, his last Premier League goal was on October 1st. Welbeck hasn’t scored in the league since grabbing two against Bournemouth in September, while Lacazette is now nine games without a goal. There are suggestions this morning that Welbeck is out with an injury he picked up in training, so we’ll have to see how Wenger decides to fill that gap today.

Ozil’s creativity and Ramsey’s lung-bursting willingness to get into the box should go some way to making us more effective up front, but the question is how exactly he fits them into his team. Will it be a return to this season’s most often used midfield partnership with the Welshman partnering Granit Xhaka, or, with the return of both Nacho Monreal and Sead Kolasinac, could we see the manager revert to a back four and use Ramsey in midfield with Jack Wilshere and someone else, possibly even Maitland-Niles?

Your guess is as good as mine really. We’re in a period where it’s hard to predict what we’re going to do and how we’re going to do it. Not because we have so many incredible options at our disposal, but more out of a blanket of confusion that envelops the squad at this moment in time. We don’t know our best system, our best formation, or our best starting XI, and that confusion may well continue for a few more weeks when, hopefully, we add new players to the team.

There’s nothing fresh in that regard today though. The manager has to find a way to get this team functioning, from front to back, and we’re now five games without a clean sheet, which is a worry. The return of Laurent Koscielny, hopefully now well rested and able to play without too much discomfort, adds quality to our back three/four (whichever we choose), but however we do it, in whatever formation, nothing less than three points will do today.

If hoping that new signings can refresh the team and help get us back on track isn’t as much glass half full as glass completely full of some magic potion that miraculously makes everything better, we can’t allow ourselves to fall any further away from the top four. At this point our ability to finish in the Champions League is very much a long shot but, you know, sometimes long shots go in.

This is a game which doesn’t lend itself to much more analysis than that. We have problems right now, but if you can’t beat Crystal Palace at home, knowing how important the victory is for all kinds of reasons, then those problems are even bigger than we thought.

Meanwhile the latest in the Alexis Sanchez saga is that the Chilean left the team hotel last night after some late night developments. It probably means that both United and Arsenal have found some way to satisfy the demands of Mino Raiola, on whom the deal reportedly hinged.

Not because he has any objection to his player going to Arsenal, but because he’s dealing with two of the richest clubs in the world, and he will not let a transfer happen without getting paid. Not the usual percentage that clubs give agents, but more, because that’s what he does.

Perhaps there was some measure of negotiation between the clubs, and it had been suggested that Arsenal were looking for some money on top of the player exchange, but if that potential payment was swallowed by Raiola’s commission I wouldn’t be the least bit surprised. Fingers crossed that’s it now, and we can get the deal done and concentrate on getting Mkhitaryan settled into the team as quickly as possible.

Finally, from Dortmund, Pierre-Emerick Aubameyang, was left out of their squad for their 1-1 draw with Hertha Berlin last night. Rather than keep a low profile, he went out to play 5-a-side with his mates, wearing a Dortmund shirt with the name of Ousmane Dembele on it. You’ll remember that Dembele basically went on strike during the summer to ensure he got a move to Barcelona, so there’s a not too subtle message there.

Pierre-Emerick Aubameyang went and played 5-a-side in Dortmund tonight with his mates…while his team-mates were playing away at Hertha Berlin in the Bundesliga. Hmm. With an Ousmane Dembélé shirt on. Hmm. [?BILD] pic.twitter.com/s8U12iAIHd

You have to say, that’s some serious wankery from Aubameyang, but all going well he’ll be our wanker sooner rather than later. Let’s see what progresses there.

Don’t forget to join us later for a live blog of the Crystal Palace game, with up to the second live text commentary and all the post-match stuff on Arseblog News. For now, I’ll leave you with yesterday’s Arsecast, which is full all with all the transfer stuff, great profiling of our potential new recruits and lots more. Happy listening, catch you later for the game.