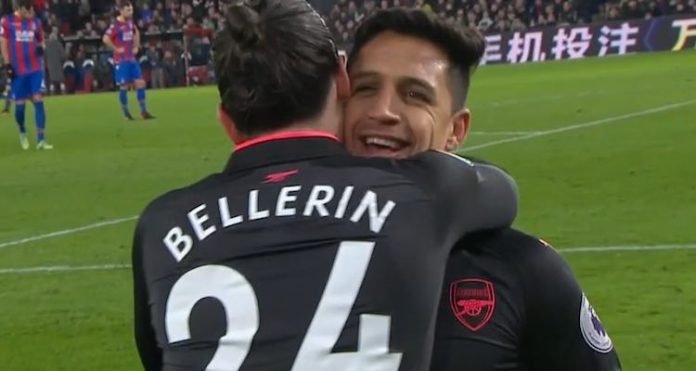 The first of three games in a week ended with three points coming our way, in no small part thanks to a return to goalscoring form from Alexis Sanchez. The Chilean scored two excellent second half goals – making him now our joint top scorer this season – but as ever there was a nervousness to us and a late goal for Palace made the final few minutes tighter than they should have been.

Arsene Wenger returned to a back three, brought in Chambers, Mustafi and Kolasinac to the starting line-up, and in the first half I thought we played some really lovely stuff at times. There was a pace to our passing that isn’t always there, and in midfield Xhaka and Wilshere looked to move the ball more quickly than they normally do.

It was obvious from early on that Alexis was feeling it, Mesut Ozil was ghosting about the pitch brilliantly, and so the fact that we only had one goal to show for our domination was a bit of a worry. We ought to have been further ahead given the chances we made and the territory we enjoyed, but as it was we only had Mustafi’s excellent finish under our belts as the second period began.

There’s always that worry with us that we’ll allow the opposition a way back into a game, and it was amusing to hear the commentators wax lyrical over Zaha’s contribution to the goal. Yes, he beat Chambers to pull the ball back into our box, but such was the lack of pace on the ball that Mustafi could have had a cup of tea and done the crossword by the time it reached the danger zone.

For some reason, he didn’t attack the ball, Kolasinac had spotted the run of Townsend and then just stopped, and less than five minutes into the second half it was 1-1. At which point I was expecting us to buckle and allow them to gain some momentum, but to our credit we weathered that little storm fairly well and came back strongly.

A poor clearance by Benteke from an Arsenal corner saw the ball lofted back into the box. Alexis won a header he really had no right to win, nodding it down to Lacazette who touched it back to the Chilean who then cracked home a shot between the defender’s legs and inside the post. Despite getting a touch the keeper couldn’t keep it out.

That was followed by a sumptuous ball over the top from Wilshere which perfectly found the run of Sanchez in behind the Palace defence. His touch and finish were both outstanding, and hopefully those are the goals that will kick him back into life this season. He is, quite simply, a player who can make the difference in a game like this, in any game really, and for all the frustration that has surrounded him, we don’t have anyone else who can do what he does.

That was 3-1 and it looked comfortable. So much so that Arsene Wenger did what he has done most often this season and took off Alexandre Lacazette and replaced him with Francis Coquelin. I’ll confess to mixed feelings about this. On the one hand, I’d love to have seen him stay on and perhaps take advantage of a Palace side that had to push forward and whose legs would have been heavy in the final 15 minutes.

On the other we have an away trip to West Brom on Sunday, followed by Chelsea at home on Wednesday, and we need him for those games – especially with Giroud out injured. He’s a player used to a winter break, this is his first season in the Premier League, and it seems obvious that Wenger isn’t simply taking him off just because he feels like it: it’s because he’s managing his fitness and wants him to avoid injuries that may occur because of fatigue.

However, the flip-side of that is it did change the momentum a bit, inviting some pressure and in the final few minutes Palace had a number of really good chances to score. Thankfully for us they fluffed their lines until the late header which made it 3-2, but it illustrated what I said in the blog this week that we’d likely have to outscore the opposition due to how leaky we’ve been at the back and thankfully we were able to do that.

Our defensive system, whether it’s back three or back four, seems to make little difference. We make too many mistakes, lose concentration too often, and allow far too many chances on our goal. When we struggle at the attacking end ourselves the consequences of that are obvious to everyone.

Last night we had enough potency to cover our weaknesses but we have to sort ourselves out back there. Which is kind of wishful thinking really, because it’s not as if we haven’t tried. Different combinations of players, different formations, none of it really makes that much of an impact, and I do wonder if the fact we’re switching it around so often back there isn’t having an effect too.

Nevertheless, when you have a player like Sanchez – for however long we’re going to have him – you have someone who can produce moments like he did last night which help you take the points. With all due respect to the forward options on our bench last night, I can’t see any of them doing what he did, which is why calls for him to dropped or cast off for one of them made little sense to me regardless of how poor his form was.

The overall situation is far from ideal, obviously, but I think Wenger’s decision to play him and play him until he found his spark again was probably the right one. Hopefully it’s the start of something, he’s a player who very often scores in streaks, and if this is the start of one then we’ll be all the better for it.

The win leaves us in sixth, level with Sp*rs in 5th and just a point behind Liverpool in 4th, and now we have to put this one behind us, and get ready for what will be a difficult game at West Brom. More on that over the coming days.

James and I will be recording an Arsecast Extra this morning, the last one before he goes away for a month, so if you have any questions or topics for discussion, please send them to @gunnerblog and @arseblog with the hashtag #arsecastextra. We’ll have that for you around lunchtime.