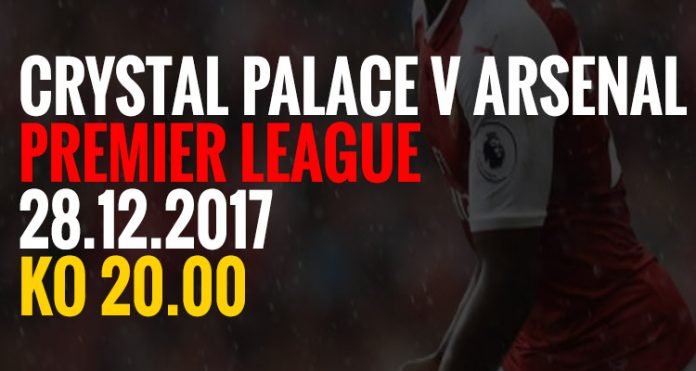 Arsenal head for Selhurst Park for the first of three games in seven days. We have two away trips – this evening and then at West Brom on New Year’s Eve – before we host Chelsea on January 3rd.

Tonight we return to the scene of one of last season’s most disappointing performances. A 3-0 defeat led to fans turning on players due to the paucity of the team’s performance and form – it was the fifth defeat in eight games; Theo Walcott went on TV afterwards and said that Palace wanted it more (and hardly played again all season); and the very next game Arsene Wenger did away with his preferred defensive system and implemented a back three.

It’s not quite right to say we’ve come full circle, or anything like it, but chances are we’ll have a back four tonight, and with just one win from our last five Premier League games it’s crucial we get back to winning ways.

In terms of the team, the notable absentees from the last game are Nacho Monreal – who will miss 10 days with an ankle problem, and Olivier Giroud whose hamstring went twang against Liverpool and is out for a good few weeks. It should mean a recall to the defence for Shkodran Mustafi, and it remains to be seen what will happen at left back although it wouldn’t be a surprise to see Ainsley Maitland-Niles continue.

Personally, I’d like to play a left back at left back. I think you can only get away with using players out of position for so long, and the relative inexperience of the 20 year was clear at times during the Liverpool game. He’s done as well as you could reasonably expect, but I don’t think there’s any good case to be made for playing him there on a regular basis.

The absence of Sead Kolasinac was explained somewhat by the manager, who said:

It sounds like he brought him in to play him in a system which uses wing backs and now that we don’t use them anymore he doesn’t really fancy him as a traditional full back. Which, unless he can convince Wenger he can do that job, makes things all a bit awkward really. I’d be up for letting him try just that though, and a left footed defender in that position should make for a better balanced back four. It’s not as if he’s without experience, having played there a lot during his time at Schalke, so he seems like the best option we have if we’re building a defence with the long-term in mind.

I can’t see much in the way of change in midfield or up front. Aaron Ramsey is still out, so we’ll probably have that left footed trio in there. Alex Iwobi has been unconvincing in recent games, so perhaps there’s some risk for him but Wenger spoke last week about how his presence in the side helps maintain some structure when you’re asking Ozil to play the slightly different role he has been tasked with.

Away goals for Alexandre Lacazette have been hard to come by, but with Giroud out, there’s more responsibility than ever on him to start scoring. His return of eight goals so far this season is not bad, especially given how he’s often been sacrificed during games, but we could really do with him finding some regular goalscoring form in front of goal over the coming months.

Not only him, by the way, as it seems more and more as if we need goals to offset our issues at the back. Whether it’s a back three or a back four we don’t look defensively secure so, in the absence of any other solution, increased efficiency at the attacking end of the pitch seems our best bet.

As ever though, it remains very difficult to predict what kind of performance we’re going to see. Defensive frailties have been obvious, as obvious as our inability to turn possession into chances and goals. It could click, as it did at Goodison Park for example, but we could just as easily see us struggle like we did against Southampton (a result that in the very cold light of day looks even worse than it felt at the time).

At this time of year, with so many games in quick succession, you can find yourself drifting away from where you need to be very rapidly if results aren’t right. We have to be looking at tonight and West Brom as two games from which we should take three points. That’s not to say it should be easy or anything like that, but if the extent of our domestic ambition now is to finish in the top four then these are the games you have to win.

Let’s hope we see a team that’s ready to do what it takes tonight.

For some extra reading this morning, Tim Stillman looks at the Alexis Sanchez situation, and makes the case for both keeping him and selling him. For me, there’s no point in the latter, and realistically there’s very little likelihood of a deal going down in January. Even if we wanted to, the fact that he can wait until summer and pick and choose his Bosman options means he’d be much more inclined to finish his season here.

As I said yesterday though, I don’t buy into the idea that he’s downed tools, but it would be very welcome to see him rediscover some of the form that made him such a favourite until the tide turned in recent times.

We’ll have all the pre and post game stuff for you over on Arseblog News. Catch you later for the game, and we’ll have an Arsecast Extra tomorrow.