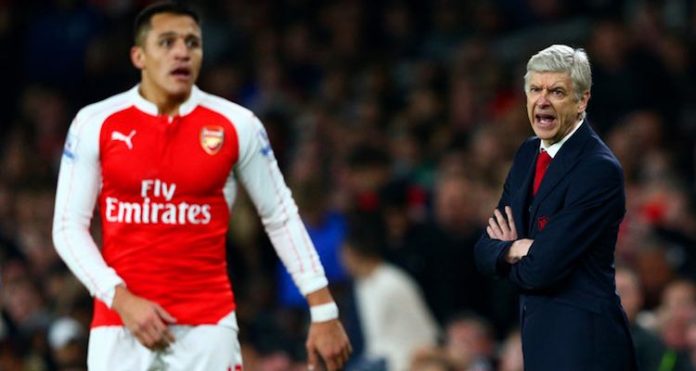 The Alexis Sanchez situation is now heading towards saga status. Yesterday, Arsene Wenger admitted he was willing to sell him last summer, but failed to do so because he couldn’t get a replacement in in time.

Asked if the situation this month was the same, he replied, “Yeah, it’s the case now … you sum it up very well.”

So, we’re open to letting him go. We probably want to let him go, but any deal depends on finding a replacement. The name being bandied about at the moment is that of Malcom, Bordeaux’s Brazilian forward, but on that the manager said, “He’s a good player but we are not on that case at the moment.”

I wouldn’t read a huge amount into that, with Wenger yesterday very obviously saying as little as possible about transfers and possible deals (including that of Theo Walcott who the club are currently in negotiations with Everton about).

“I don’t want to give information that I cannot back up after,” he said. “You’ll come back after and ask why did I say that.”

He rarely admits interest in players we’re keen on signing, and the merits of a 20 year old coming in to try and replace Sanchez is probably a debate for another day, but his downplaying a potential deal is something we’ve seen countless times before. Most often it’s because we’re not actually interested in the player, but there are examples of him doing the same before bringing that player in.

The situation has become more complicated by the apparent interest of Manchester United, and the fact that Man City are threatening to walk away from the deal because they’re unwilling to pay what Arsenal want as we reportedly hold out for something closer to £35m.

On the one hand, I can see why we would try and get as much money as possible from the most cash rich club in the world. On the other, when you’re dealing with a player who can go for free in June, you really don’t have a strong hand when it comes to bargaining over a fee. They don’t desperately need him, they can just wait and sign him on a Bosman in the summer.

Now, whether the issue is entirely down to Arsenal is another question. It’s not beyond the realms of possibility that agents fees and player salary may be playing a part, but I don’t think those are insurmountable problems for a club like City. So, we’re left with three options.

1 – We keep him. And unless he’s absolutely toxic around the place and the dressing room is a disaster with him in it, that’s what I would be inclined to do. Wenger has said often he doesn’t question Sanchez’s commitment when he’s on the pitch, and of all his qualities his desire to win trumps everything else. If he stays, he’ll play and he’ll score goals and create goals. We have a European trophy to play for too, and he can be a part of that.

2 – We take the £20m from City, we invest it in Malcom – accepting the fact that he’s someone who could make an impact, but is likely a player for the future, and we hope that others in the team can step up and help offset what we miss from Sanchez.

3 – We sell to United if they come in with a larger offer. Personally, I would hate this. Maybe it’s irrational, but the idea of him going to United and us selling one of our best players to Jose Mourinho is anathema to me. You can try and convince me all you like that if we’re going to sell we should get the best deal possible and the most money possible, but I can’t look at it in that way.

I don’t think there’s a swap deal that they’d do that would work for us, and while I’ve admired Henrikh Mkhitaryan in the past, it’s hard not to wonder if his troubles at United are entirely down to his relationship with Mourinho. It could well be, the United manager is the kind of person who enjoys the destruction of an individual in order to demonstrate his authority over his squad, but he may emerge from this situation a busted flush, or take a long time to find his form and confidence again. It’s not one I’d be keen on, and I reiterate my earlier point about selling to Mourinho. He can stick it.

The thing is, it seems we’re really, really willing to sell Alexis Sanchez. Despite saying all last summer that he was staying, we tried to do a deal close to the end of the transfer window and made a balls of it because we left it too late. Wenger said yesterday he tried to sell him then, and that he’d sell him now if we can find a player to replace him. That’s our now very public stance.

If that is the case, let’s not make this one of those situations that drags on and envelops everything. There’s no interest from clubs abroad so that’s not an option, and between City and United there’s only palatable destination for me. Pep Guardiola’s side are so far ahead of us right now that Sanchez going there doesn’t really make that much difference. We’re closer to United, if not as close as we’d like to be, and I don’t think giving them that boost in quality makes up for the extra cash they might be prepared to pay.

Some of it is out of our hands, of course. What the player wants is a factor, how much he wants, and all that, but it wouldn’t be a weakness now to sell to City. It would be making the best of a bad situation, one that we have contributed to, so let’s not be blind to that. I was all for keeping him last summer, I thought it was time we prioritised football talent over money, but our stance buckled, and ever since we’ve been firefighting.

There’s a lot of work to do at the club at the moment, and rebuilding the squad is part of it. The manager says contract talks with Mesut Ozil are ‘very much alive’, and he wants to sign up Jack Wilshere too, but has clearly written off Sanchez as part of our future:

It looks like Sanchez will not extend his contract, but we want to keep Jack and if we have an opportunity maybe to keep Ozil, the rebuild will be less deep than if all three left.

As much as we possibly can, we should start thinking about that future now. The whole situation with the fee, City threatening to nix the deal etc, may all be brinkmanship and part of what happens in high level transfers, but it’s also a distraction and we’ve seen situations like this take difficult turns before. This is a squad and a dressing room that could without this hanging over it.

What will happen? Your guess is as good as mine. My suspicion is a deal with City and a transfer in to replace him, but it’s hard to say with any real assurance. In the meantime, we have a game on Sunday, and Sanchez’s participation in that, or not, will be interesting. Whatever happens – option 1 or 2 because I simply can’t countenance number 3 – I hope there’s a decision made quickly, because there’s nothing quite as tedious as a protracted transfer saga and we’re on the cusp of one right now.

Right, that’s your lot for this morning. Back tomorrow with a preview of the Bournemouth game, in the meantime have a great Saturday.