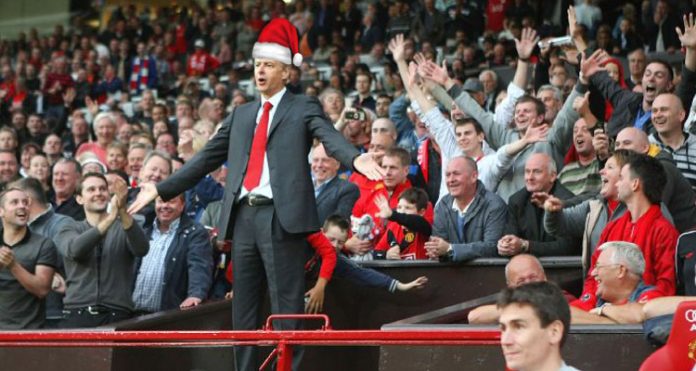 Hello, a very quick one because it’s Christmas Eve, and also because I burnt the shite out of the top of my right index finger last night and typing is quite weird and painful. Pro-tip: when closing the door of a wood burning stove, use the handle and don’t poke it closed on the glass bit that has been rendered as hot as Satan’s balls because of, you know, the fire.

For those wondering how to deal with such a burn: cold water, a good rye whiskey and some Ibuprofen seemed to do the trick. The more rye the better I think – as far as I can remember anyway.

Following on from Friday night’s 3-3 draw with Liverpool, there’s controversy involving Jurgen Klopp. The German was involved in a horrendous incident, the likes of which we have sadly seen before but thought we’d manage to eradicate from the game.

When Roberto Firmino, with his glistening teeth like the shark from Finding Nemo, scored the equaliser, the Liverpool manager reacted by … please brace yourselves, if any young children are in the room you might want to switch off … throwing his bottle of water. The man is an absolute disgrace.

Throwing. A bottle. Of water. I just can’t get my head around such an act of wanton insolence and disrespect.

In a league sponsored by a bank that paid tens of millions in fines for rigging the markets, full of teams owned by oligarchs and oil-rich states, in a stadium sponsored by the national airline of a nation whose human rights record is questionable and which views homosexuality as a crime, Klopp tarnished all that is good and pure about the game by flinging a plastic bottle that, as we all know because of Blue Planet 2, should be polluting the oceans where it belongs.

He tried to explain himself afterwards, saying he was merely reacting to the abuse he was getting from the crowd:

I have made my apology but the people, if they would all apologise for what they said to me, it would take a little bit longer than my apology. I react sometimes a little bit strange.

Maybe it’s not nice. The ref told me. But I took it back and I could still empty it afterwards so nothing serious.

I think he’s trying the classic distraction here, blaming the Arsenal fans to justify his indefensible actions. We all know that the crowd were too busy eating bags of carrots and playing Ballz on their iPads to waste their time casting aspersions on the character of Klopp and possibly his family/friends/everyone he’s ever met. Also, Arsenal fans are far too educated and civilsed to get involved in anything like that, particularly the ones that sit close to the away dugout and whose entreaties could easily be heard if they decided to let rip (which, of course, they didn’t).

I truly hope that the FA throw the book at him like he threw the bottle of water at the sacred ground. I’d go so far as to Interpol should probably get involved, to ensure that he is punished to the full extent of all the laws it’s possible to prosecute him under.

And in this week of all weeks. It’s a special time of the year, when the FA do their best to ensure that the things we love about football are protected. Like young England internationals attempting to break the legs of their opponents and instead of being harshly and unnecessarily punished for what were good old fashioned tackles on which the English game has been so carefully crafted, they were given a lovely yellow card.

Now, this act of seasonal goodwill to all men (as long as they’re English) has been tarnished by Klopp’s deplorable conduct. This metaphorical two-fingers to the authorities is an insult to the game of football itself. This man, with his burgundy passport, clearly didn’t pay attention when that other well-known trouble-maker, Arsene Wenger, was made an example of for a similar crime against humanity.

The Frenchman was sent to the stands for booting a bottle at Old Trafford, and that should have been a reminder to all managers that projecting of any water carrying receptacle either in the air, along the ground, or onto the ground, will simply not be tolerated.

But of course Klopp thinks he’s the great I am, I am. He believes he’s above the rules and if the FA don’t hit him with a sideline ban for at least the rest of this season then, I’m afraid, the game’s gone.

Finally, I’d just like to take the opportunity on behalf of all of us here at Arseblog and Arseblog News to wish you all a very happy Christmas. I know not everyone who reads is celebrating it, but whether you do or not, I hope you have peace and love, health and happiness – things that would make the world a better place whatever you do at this time of the year.

Catch you on the far side.

Dortmund preview: this is the good stuff