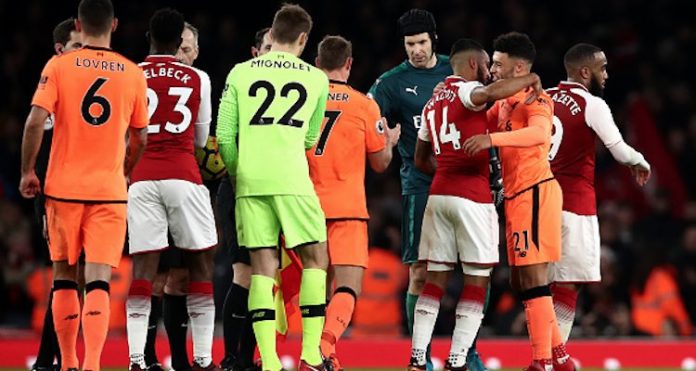 Arsenal produced four minutes and forty seconds of sensational football last night to drag themselves out of the mire, and then did what we always seem to do against Liverpool – let in an equaliser that feels inevitable.

Until the Alexis Sanchez goal at 52’55, we had been nothing short of abysmal. Defensively horrendous, midfield didn’t function at all, we turned the ball over carelessly in our own half and theirs, and it’s clear Liverpool had a plan to try and exploit some of our weaknesses. For example, when Arsene Wenger talked up the qualities of Ainsley Maitland-Niles at left back this week, he did so with the caveat that he specifically had to work on his heading.

When you add that to his lack of positional experience – something I’m at pains to point out is hardly his fault, what with him not being being a left back and all – it’s no surprise that two crosses to the back post, where a player in that position should be, fashioned two great chances for Firmino. One drew a good save from Petr Cech, the other dropped just beyond the far post with the keeper stranded. It’s almost as if the opposition heard the manager make public a flaw in our team and looked to attack it.

The 20 year old had dealt pretty well with Mohamed Salah, but again his inexperience showed for the first goal, getting attracted into midfield and allowing the Egyptian run behind him down the right. Koscielny was there to cover, but the cross deflected off him and Coutinho was sharpest to head home despite being tracked by both Wilshere and Xhaka who lacked the zip to keep up and get near him.

That was 1-0 near the half hour mark, and how we didn’t go in further behind is anyone’s guess really. Cech saved from Salah after a Koscielny slip, and Mane’s acrobatics saw the ball fizz just over. Firminho had previously curled an effort just over the bar, there was a Salah miskick in our box, and there seemed little we could do about it.

Wenger said his team were ‘paralysed and frozen‘ in the first half, citing the Manchester United game having a psychological impact on his players. First of all, get over it. Second, it’s too easy to blame psychology and intangibles rather than the quality of the players, the system, or the tactics, which were far more of an issue than a game a few weeks ago – especially when, despite the defeat, we probably played some of our best football of the season.

What we needed was a good start to the second half, what we got was more of the same. We lost the ball way, way up the pitch, Liverpool broke, Arsenal’s schoolchildren all went chasing after the ball allowing Salah space in midfield to run at Mustafi, and his curled shot took a nick off the German and went into the bottom corner to make it 2-0.

At that point I had as little confidence in an Arsenal team to get anything from the game as I think I’ve ever had. But what do you know? The blitz happened. Firstly Bellerin crossed from the right, Sanchez attacked the ball and got there before a static defender to nod home from close range. 1-2.

Then Xhaka unleashed a fantastic shot from distance which Mignolet probably should have done better with, but it was still a great effort to bring us level. And when Ozil combined beautifully with Lacazette to get in behind and do another one of those finishes where he lifts it over the keeper via the ground we were, remarkably, 3-2 ahead at 57’41.

Credit where it’s due, it was a brilliant response. We’d pulled a Christmas rabbit out of the hat with just under 5 minutes of outstanding football, but I can’t say I was ever confident that we’d hold onto the lead. There was too much wrong with us for the rest of the game for this to turn the tide completely, and so it proved.

Just before the 70 minute mark, we cleared the ball from a corner. Alexis could have taken it down, held onto it and waited for a good option. Instead he decided to try and head it over Salah, slipped, and conceded possession. As has so often been the case this season, losing it in our own half so needlessly proved disastrous.

Emre Can had too much space in front of our area, and Koscielny was in outer-space with his positioning leaving Firmino all the time and space he needed to unleash a powerful shot which Cech couldn’t keep out. I’ve seen fingers pointed at the keeper, and it’s never a good look when that happens, but it was a shot from relatively close range and I wouldn’t apportion anywhere near as much blame on him for it as I do for losing the ball and the slapstick defending that allowed the Liverpool player the chance in the first place.

The final 20 minutes were probably a bit less frenetic than I had expected, perhaps both teams were jaded at that point. I remember a Salah shot that hit the side netting, Bellerin forcing Mignolet into a save, but in the end it was a point and one that we can really have no complaints about.

If you’d offered it to me at half-time I’d have bitten your hand off, and despite leading 3-2 and letting it slip, it’s hard to say we deserved any more from this game. Afterwards, Arsene Wenger spoke to Sky Sports about what he said at half-time:

I said to the players that the good thing is that we are only one down. In the second half it’s a great opportunity for us to show a different face, what we did was not good enough. At least go for it, we have nothing to lose.

It’s basically make it up as you go along stuff. Before the match he talked about ‘touching wood‘ when it comes to defending, incredible stuff really. I know it’s a turn of phrase, but it’s ascribing fortune to an area of our match to which we should be applying hard work, practice, diligence and tactics.

That back four does not work. I’m not down on Maitland-Niles, by the way, who is doing his best, but he’s not a left-back. Koscielny is struggling for form, the defence doesn’t get any of the protection it needs from a midfield which also doesn’t work, and there was little going from an attacking point of view until that five minute spell when everything clicked before it un-clicked again.

I saw some people talking about the game being fun, and I can see that point of view. If you can step back and look at it objectively, it would have been entertaining. The classic ‘great game for the neutral’, but I’m not neutral. I found myself deeply frustrated after this one.

It was frustration based on our overall performance, exacerbated by the fact that we let in another equaliser against Liverpool from a winning position (see 3-3 Anfield, Jan 16 : 2-2 Anfield Dec 14 : the 99th minute penalty at our place : the Arshavin four goals game). At 3-2 yesterday we had pulled off one of the great turnarounds in the league this season, but we just had to blow it with our stupidity and carelessness because that is what we do.

All of that is topped by the fact we rode our luck so considerably in that first half. I don’t find anything the least bit entertaining about the way we played in the opening 45 minutes and the first 10 of the second period. I don’t think there’s anything ‘fun’ about a team that simply cannot do the basics. For me there’s nothing to enjoy when I see Arsenal all over the place, when I see certain players going through the motions.

The end of the first half was informative for me. Almost to a man the Arsenal players had their heads down, broken, as if we were 6-0 down in the final seconds of a game rather than just 1-0 down heading towards half-time. There’s something really wrong, the three goals – as enjoyable as they were, and they were – can’t mask that.

The manager, always an improviser, playing off the cuff, now looks like someone playing the wrong end of the trumpet. Nine times out of ten playing like that against this Liverpool team will see you get a hiding. We didn’t and obviously I’m glad we didn’t, but let’s not allow the point we earned to obscure the paucity of that performance, and the inability we have to set our team up properly.

If you want to argue that we deserve credit for getting back into it and scoring the goals, I’m with you 100%. We do. But at the same time, you can’t choose only to look at that little spell when things came together, and not also acknowledge that we have serious problems at the moment, and we don’t look capable of dealing with them.

Still, it’s a point that may well prove valuable in the long run, but until Arsene Wenger starts picking a balanced team, with players in their correct positions, we’ll have more days like this one, and others won’t be as generous or wasteful as Liverpool.