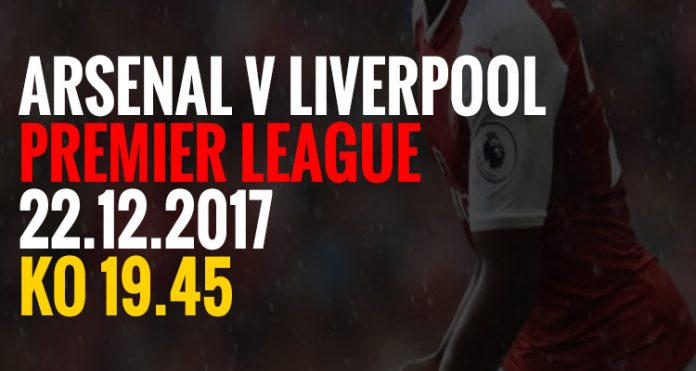 Good morning to you. My Christmas gift arrived early in the shape of a minging cold. I blame all those people who go around coughing and sneezing without covering their mouths, and when I become benevolent dictator of the world, they will be sent to Monster Island to fend for themselves (once I invent some monsters who kill people really slowly).

It’s the Friday night before Christmas, normally an evening when people will clock off, have a few beers, and enjoy the festivities. That’s still the case tonight, but slap bang in the middle of it there’s a game of football as we entertain the Mugsmashers at home.

There are decisions for Arsene Wenger to make. First is his defensive shape. Having started with a back four in the last three games, it will be interesting to see if he does that again tonight. The absence of Aaron Ramsey in midfield, and the lack of any player of similar attributes to work alongside Granit Xhaka, has seen us deploy the extra man in midfield, and that’s obviously still an issue.

We welcome back Shkodran Mustafi after an injury break, and a central defensive duo of the German and Laurent Koscielny is probably the best duo we can field, which would allow him to play an actual left back at left back in the shape of Nacho Monreal. It’s unlikely he’ll use Sead Kolasinac, who played 90 minutes on Tuesday, but what of Ainsley Maitland-Niles?

He was not even in the squad for the Carabao Cup game, so is Wenger planning to play him, and if so, where? I know football is a game in which you have to take risks some times, but asking a 20 year old playing out of position to deal with the in-form Mohamed Salah, and a Liverpool attack that has been pretty potent in recent weeks, is a bit of a stretch for me.

Is there room for him in midfield then? With a back four and three in midfield, I think there might be. The manager spoke during the week about his recovery pace, how he’s good in one on ones, and given this area has been relatively weak for us in recent times, his selection there may well give us better balance. The question then becomes which one of the left-footed trio would make way, and that’s difficult to answer.

While many would like to see him take the place of Xhaka, I think Wenger rates his ability to play from deep positions, and there’s no chance of leaving Mesut Ozil out, so perhaps Jack Wilshere is the one who is most in danger if that’s what he’s thinking. Of course, he could just play Maitland-Niles at left-back as he has done in the last two games, and we’re becoming an increasingly difficult team to predict in terms of line-up (this could be a good and bad thing).

As for the game itself and what it means, there’s a measure of revenge required here. That’s the wrong word though. At Anfield earlier in the season our 4-0 defeat was basically self-inflicted through shoddy management, rubbish team selection, an inability to deal properly with the transfer market, and 11 players who performed abysmally on the day.

There was so much wrong with us, as a team and a club, that day and we were punished fully by a Liverpool team who were allowed run riot. So, as most of the same players will be on the pitch tonight, they owe it to themselves and the fans to put that right. The manager has to get a big performance out of his players, as he did when Sp*rs arrived at our place last month as most peoples favourites before leaving with their tails between their legs.

Our record against the big teams this season has been poor so far. Beaten by Man City, Liverpool and Man United, we have just a single point from our game at Stamford Bridge to show for it. Tonight, and the visit of Chelsea on January provide us a chance to improve that record, and we know that on our day we’re capable of the kind of performances required to win those games.

The issue is the lack of consistency in that regard, so let’s hope tonight isn’t one of those where we make life difficult for ourselves – like we did against United – and instead ensure it’s the opposition that have a tough time.

With Friday night lights and Friday night pints, there should be a cracking atmosphere inside the stadium tonight, so fingers crossed the team give us a lovely Christmas gift, and not a well wrapped box with gone off potato inside with all the gross tendril bits sticking out of it.

Right, I’m going to go and drink as much Lemsip and medicine as I can, gonna Chris Froome the shite out of it, and I’ll catch you over on Arseblog News later on for the match report, player ratings and all the rest.

For now, I’ll leave you with a festive Arsecast, featuring Tim Stillman, the Mugsmasher and lots more.