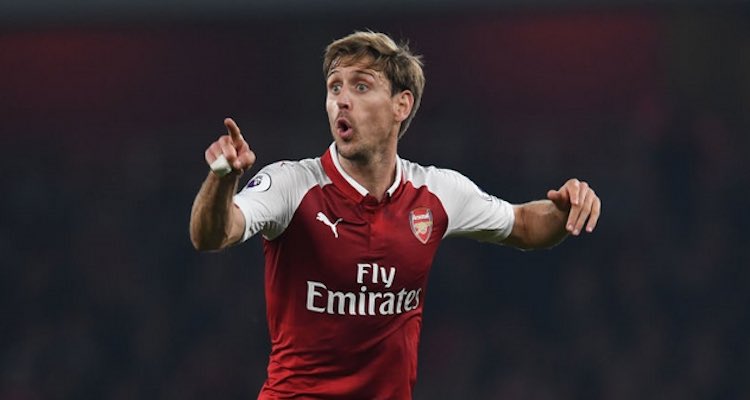 As the season started and the transfer window closed, some thought Arsenal were a bit light at centre-back. Admittedly, those people still thought Nacho Monreal was being used as the left-sided player in our back three in a makeshift way. One month on and the Spaniard has been named the club’s player of the month for September.

Of course, complaints ignored what is something of a trend: Alaba a couple of years ago, Azpilicueta now and even Lukas Piszczek, who was a flying wing-back just a few years ago. Even Daley Blind in a back four. Moving to centre-back from the flank or defensive midfield has become a natural progression for many players as they have become older and as the game requires better ball players in all positions.

Moreover, ultra defensive setups and universality have seen a greater need for centre-backs who can not only use the ball sensibly under pressure and can even threaten teams with their passing and their movement. A David Luiz is worth the occasional mistake because he’s so good with the ball at his feet.

Nacho Monreal, then, has stepped into a role between that of a centre-back or a left-back in a back four and it suits him, and Arsenal, down to the ground. While still playing left-back, Monreal was probably the most consistent defender in the Premier League, gave forwards no chance, and was sometimes compared to a wall. Not my words, by the way:

Right now, in his new position, Monreal is probably Arsenal’s player of the season so far and our most important defender. With and without the ball, he manages to set the tone for the entire side from his left centre-back position, establishing himself week after week as one of the best defenders in the country.

Defensively, Arsenal often need someone to set the tone. The Gunners are used to having the ball in games so it becomes crucial for someone to put some impetus into the side’s defensive display too. Winning the ball high before attacks are launched is important not just for preventing chances, but for keeping the tempo of Arsenal’s game high and increasing the pressure on the opposition.

It was obviously a spectacular goal-line clearance that won plaudits in the recent game against West Brom (and rightly so) but Arsenal’s fast start was inspired by Monreal’s work in defence. Lining up against something of a 5-3-2, it was clear West Brom would play directly to their strikers to launch counter-attacks. Mainly thanks to Monreal, that was never too much of a concern.

The towering Hal Robson-Kanu has an obvious physical advantage over Monreal but the Spaniard’s speed of thought constantly helped Arsenal recapture possession before West Brom could get near the striker and build a move.

This style of play is probably the most notable difference between Monreal in 2017 the the player we signed four years ago. Arriving in a new league, Monreal was a comparatively reactive defender as he settled in at Arsenal. Thrust into a centre-back role late in 2014, Monreal came of age. The position forced him to attack the ball more and his sense of timing was immediately more evident. From then he hasn’t looked back.

Now a little slower (not that he was ever the quickest), the current role in the back three is perfect for him. His aggressive streak constantly sees him snuff out attacks as they begin. The nature of Arsenal’s game means, like any side that dominates possession, the opposition sit back and launch direct attacks by looking for a lone striker.

Monreal’s timing in these situations is nothing short of impeccable, always preventing the forward from turning to face goal and regularly stealing the ball away from them on, or even before, their first touch. In the worst case situations, Monreal usually forces the player to play the ball back and delays the attack long enough to give his team-mates enough time to make their way back.

As a defender, he has tenacity and technique in abundance. That’s pretty important, as Arsenal’s midfield can be bypassed pretty regularly. Like Monreal, Laurent Koscielny also excels in such scenarios. Preventing counter-attacks exceptionally, reading the game well enough to cover his team-mates and make stunning goal-saving clearances, Monreal is extremely committed but also intelligent.

His covering of Willian in the recent 0-0 draw at Stamford Bridge was part of the reason Antonio Conte opted to change shape at half-time.

Sky Sports highlighting Arsenal's shape, but also look at how tight Monreal and Koscielny are to "wide" forwards. pic.twitter.com/dkA7JUJVW8

Arsenal struggled with Chelsea’s system after the break, which saw three midfielders and two more advanced players, and it was something the team seemed unprepared for. Monreal, naturally, adjusted his game superbly to cover Sead Kolašinac in wide areas more often and sit a little deeper to help protect Shkodran Mustafi as Chelsea wrestled some control in midfield.

In possession, Monreal is just as good. That West Brom performance was elite in more ways than one. As a left-back, Monreal never had blistering pace but timed his runs to perfection, just as a defender was off balance and someone (usually Alexis Sanchez) was ready to release the ball to him. The assist numbers didn’t back it up but Monreal got into good positions incredibly often, not dissimilar to how Kolasinac does so now.

Playing at centre-back, Monreal hasn’t lost that. I mentioned David Alaba earlier and – obviously – I’m not comparing the two but the Austrian often played an almost box-to-box role from centre-back for Pep Guardiola’s Bayern Munich side. What Arsenal have in Monreal is something not entirely dissimilar. Just check the clip 20 seconds into his personal highlight reel from the West Brom match:

Average touch maps and pass maps show Monreal tends to be positioned a bit higher than the defender on the opposite side – usually Laurent Koscielny or Rob – as he offers Arsenal another avenue of attack. When there’s little risk to venturing forward, Monreal has a brilliant sense of how and when to drive into spaces.

Starting at centre-back, he is rarely marked. Teams usually start with one striker and rarely press Arsenal high up the pitch, preferring to sit off and break. That leaves Monreal free to drive into spaces alongside the midfield or even as high as the final third. The use of a touchline-hugging wing-back stretches sides and pushing Monreal up into the midfield can be one of the benefits, as Chelsea have learned with Cesar Azpilicueta.

As per Whoscored, Azpilicueta has more assists in the last 14 months from ‘centre-back’ than he had in the previous two seasons at full-back. As teams retreat or are pulled to one side of the pitch, the Chelsea defender drives into the half-spaces alongside the midfielders to deliver dangerous angled passes.

Similarly at Tottenham, Jan Vertonghen and Toby Alderweireld play wide in the back three so they are able to drive with the ball. new signing Davinson Sanchez sits between them, passing sideways and covering space as the two Belgians launch attacks. In Sead Kolasinac and Hector Bellerin, Arsenal have two true wing-backs to stretch teams and Monreal shows perfectly how we can take advantage of the spaces that open up. Nacho is slightly different in that he reverts to his natural predisposition for overlapping as well as underlapping, but that’s perfectly fine as it adds variety to an often predictable Arsenal attack.

One last point should be Monreal’s terrific on-field relationship with Alexis Sanchez. As we have seen lately, even a not-really-bothered Alexis has the ability to turn the game. The pair enjoyed a solid relationship on the left before the formation change but have managed to keep it going since. Monreal and Alexis tend to sit vertically in-line with each other, between the wing and the centre of the pitch. With Kolasinac wide and Alexis drifting, Monreal continues to be the Chilean’s number one line of supply.

This could pose an issue moving forward, when Alexis doesn’t play and eventually (barring something strange happening) leaves the club. In the West Brom game alone, Monreal found Alexis 18 times – Arsenal’s highest pass combination in the match. Against Chelsea in the league, the Spaniard played one ball into Danny Welbeck in the opposition half.

Waiting to phase Alexis out and learn how to live with him, Arsenal effectively used Welbeck from the left this season but he acts as more of a second striker than an all-round playmaker and goalscorer. This is fine, it’s looked good at times, but it may require a rethink if it takes away Monreal’s through-the-lines passing, one of the side’s best weapons when building play.

Like Monreal’s importance isn’t obvious enough, the numbers back it all up. Monreal snuffs out danger brilliantly enough to have the most interceptions in the Premier League (22) up until now as well as the third most successful tackles (19) of any defender. No Arsenal defender completes passes at a better rate and nobody is safer in possession – Monreal has been dispossessed three times and lost the ball from a bad touch just once in seven Premier League games.

If only the clearance stat gave extra weight to mid air clearances off the line. Suits wide CB so well pic.twitter.com/YvnFYswSXj

In an article last year, Ted Knutson spoke about how Arsenal’s defence is far more intense on the left-hand side and revealed it had been christened the “Nacho Monreal Zone of Death” by @StatLurker. In another life, Monreal is even a good-enough all around footballer to have become a midfielder (post-match pub chat turned to this conclusion a number of times in recent years) but we may have found his best role yet.

One wonders if Arsene Wenger is, at least partly, now sticking so steadfastly to a formation he seemed far from enamoured with because Monreal is just so good in the role. Not changing the system from time to time is odd but if it’s a concession being made so Monreal and Kolasinac can both play, it’s one I can live with.