We have a week of distance from that debacle at Anfield, the melee of the transfer window is slowly beginning to fade into the distance and the end of the first intrusive international break of the season is almost upon us. With all that in mind, it seems to be a good time to look over the start to the season and assess what the hell was up with Arsenal.

Ah yes, Arsenal. You’d allowed yourself to forget for a second, hadn’t you? Sorry but Arsenal are not finished yet, the season is only just underway and a trip to Stamford Bridge is just around the corner. Triggered yet? Good. Now you have something in common with Granit Xhaka.

There has not been much to enjoy from Arsenal’s first few performances of the new season. There’s been plenty wrong with each of those performances and Xhaka has, unfortunately, stuck out badly. That, along with the stat below, is what I decided to have a look at.

Ok, so had a quick look at the 8 goals conceded by Arsenal this season:

Arsenal seem to have found a new way to frustrate us: conceding immediately after giving the ball away. It’s no news that counter-attacks are dangerous and Arsenal being susceptible to them is certainly not something alien to us. It is, however, something the back three (or five) was supposed to help us manage a bit better.

“They leave [Shkodran] Mustafi and Gabriel really exposed. Monreal and Bellerin play like right and left wingers. The wingers come inside with the centre forward, and [the centre backs] are just left on their own. So if you can get at them you can get into the box and make chances,” said Sam Allardyce after Crystal Palace humiliated us in March. That was the last time Arsenal started a game with four at the back.

With the new formation, Arsenal have three defenders back at all times but it isn’t enough of a solution. It isn’t about numbers, rather about space and how Arsenal are playing with possession of the ball. Over and over again Aaron Ramsey’s positioning is highlighted but it’s a (seemingly outdated) ploy from Arsene Wenger, an attempt to draw opposition sides out before sucker-punching them.

Why don't we pass through the middle? Why does Ramsey play so high up the pitch? Goes back to this: pic.twitter.com/j0MLLoDRx5

Just to prove Ramsey’s positioning doesn’t have to be so destined to fail, here’s an example from the Stoke game where Arsenal actually created a great chance after initially losing the ball. Ramsey (circled) has made a ‘risky’ run but Danny Welbeck and Alexandre Lacazette are deeper than one would expect. The pair, along with Hector Bellerin, instantly press a lose ball and recover possession before releasing the dangerously-positioned Ramsey. We almost scored. 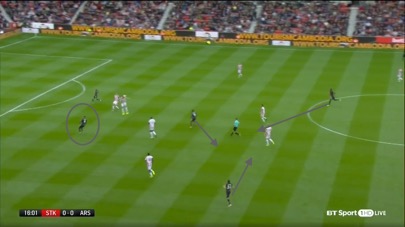 Now look at the difference when Arsenal played a long ball from deeper at Anfield. Arsenal are playing from left to right and there’s a decent chance Alberto Moreno will win the header. For some reason, though, nobody is standing where that ball would land. 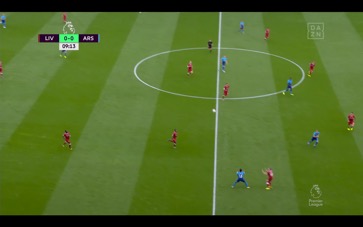 Look how close Liverpool’s midfield and back-line are to each other, just in case the ball lands between them. Then contrast it to the gaping chasm between Arsenal’s defence and midfield, if you can call it that. Of course, the ball landed exactly where you think. From a goal kick Arsenal are instantly defending a dangerous attack because the gap between the defence and midfield is absolutely monstrous.

Seriously, you could park 2010 Sol Campbell’s backside in there. Twice. 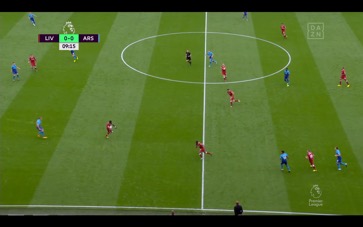 If the Arsenal midfield is going to be so spread out, the very least the back-line has to do is get as high up the field as possible and squeeze the space. If they don’t trust themselves to deal with the pace and movement of Liverpool that way, abandon all plans to press the opposition.

The issues with the pressing (and there are oh so many) are for another day and I don’t want to waste too much time here when I think Arsenal will almost certainly abandon the back three in the near future anyway. Instead, it seems like a good time to around this off by turning attention to Granit Xhaka and an obvious weakness in his game.

I should say this firstly: I think Xhaka is a very accomplished footballer. An excellent passer and a much better defender than he given credit for. It’s generally enjoyable watching him play football for my club. He’s very good at the base of midfield … until he loses the ball. When Arsenal give the ball away and have to transition, Granit Xhaka is terrible and his flaws are exacerbated by the way the team plays.

For anyone who doesn’t know what I mean by transition, here’s a handy outline showing the four phases of a football match.

It’s that last one, transitioning from attack to defence, where Arsenal are really bad. Grant Xhaka is particularly bad, especially when he’s the player who loses the ball.

So, Arsenal have conceded three times immediately after Xhaka has given the ball away this season. Let’s look at the incident against Stoke City. Xhaka lost the ball with an overhit pass from the halfway line. This should not be a big deal at all. 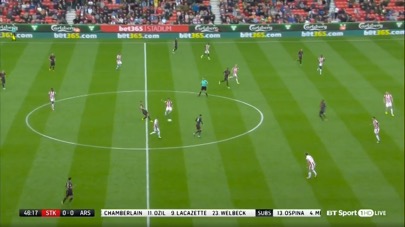 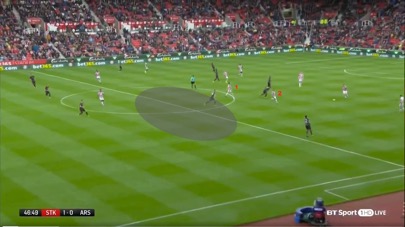 Arsenal are pretty comfortable, actually. The entire back five is behind the ball, so is Xhaka. Mesut Ozil is too but the ball will come past him as he’s off balance, that’s no big deal. Xhaka is right in front of that defence and as long as he stays right there we can’t really be exploi…..WHERE ARE YOU GOING GRANIT?!

One simple pass beyond the onrushing Swiss and Stoke are bearing down on our entire defence with half a pitch to make clever runs into and pull a makeshift back three every which way they like. 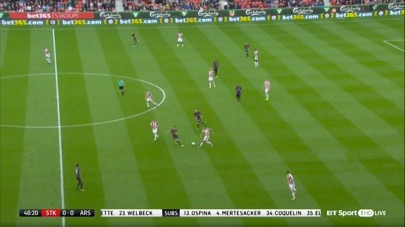 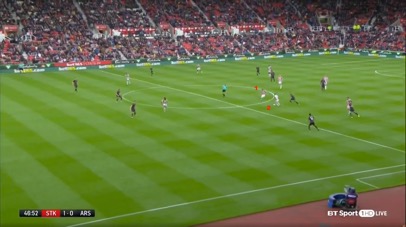 That is, of course, exactly what happened. Two Stoke midfielders were suddenly in behind Xhaka and running at the back-line because he had an inexplicable rush of blood to the head. This gap between defence and midfield, this is where Arsenal are so weak, and it’s so easy to get there because it’s bloody massive.

The very same gap was seen in pre-season too, and not only when Ramsey was on the pitch. A completely flat pairing is just as bad, drawing individual defenders into uncomfortable compromised positions between the lines. It’s something Laurent Koscielny and Nacho Monreal are (fortunately) excellent at but even in moments we thankfully forget, moments of improvisation serve to excuse Arsenal’s shoddy defensive organisation. 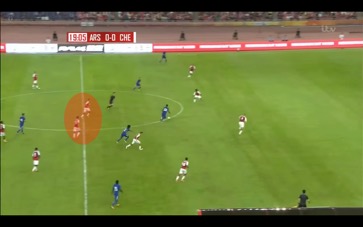 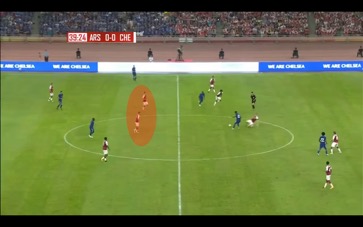 For some reason, Xhaka is constantly involved in these situations. He can’t help himself. Instead of pushing a player wide, defending by backing off and slowing up the play while team-mates chase back, he dives in. It works sometimes – sure it does – but others it is completely costly and his position is not one where high risk/high reward is the order of the day. 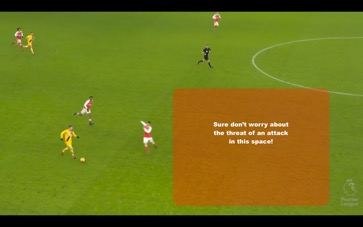 Not only do these moments of madness expose the defence, but they can go horribly wrong and see Xhaka punished by the referee. We’ve certainly seen that.

I am genuinely unsure whether it’s panic or a lack of understanding, but the midfielder’s tendency to bust a gut every time he loses the ball sees him either easily passed or sent off pretty much every week. Chris Foy doesn’t need an invitation to send you off, stop giving him one. 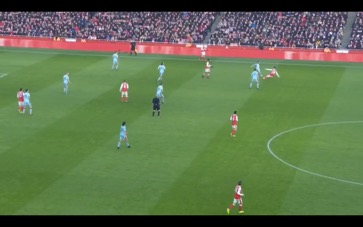 The worst part of all this is I really like Granit Xhaka. I think he’s excellent, certainly as a passer of the ball. He’s also a very good defender when Arsenal are sitting deep. With more time to think he fills up spaces excellently, blocks passing lanes and sniffs out danger. Unfortunately, Arsenal keep trying to defend on the front foot. It’s something the team struggles with and Xhaka is the most guilty, as well as being the player asked to do the most as he is the one exposed by those around him on the ball.

Due to the nature of Xhaka’s position and the way Arsene Wenger has everyone else abandoning him on the ball, this doesn’t look like a problem that will go away any time soon. Maybe a return to the back four will see a more restrained midfield partnership with Aaron Ramsey (or whoever else Xhaka is paired with) in future.

For the time being, though, we’ll just have to hope the team spots the issues among themselves and plays in a tighter shape. Brilliant improvisation and the reliance on it will remain the saviour and downfall of Arsenal for a little while yet.

Previous articleWenger says he hesitated over new contract, so why did he stay?
Next articleEpisode 438 – All the young dudes