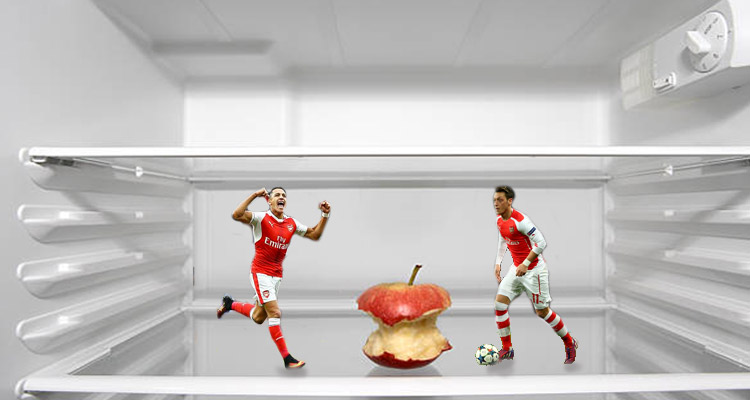 Just a little pro-tip for all you DIY men and women out there: when you’re defrosting a freezer don’t try and accelerate the process by hacking away at the ice with a bread knife. Despite the very satisfying chunks that you manage to chip away from the inside, you run the risk of puncturing a hole – or indeed holes, great massive holes – in the coolant pipe thingies and releasing all the gas that keeps stuff cold. Especially if you use the sharp side of the knife. So, there’s a bit of educational/self-evident stuff to start your Friday with.

Yesterday the manager met the press ahead of Saturday’s game with Watford. He confirmed the injury to Shkodran Mustafi, which will see the German sidelined for somewhere between four and six weeks. There are other snippets but we might touch on them tomorrow when we preview the game.

Wenger was asked about the future of Mesut Ozil after comments from the player’s agent this week which said talks with Arsenal were going in a ‘positive direction’. He said:

That’s my understanding, yes. I always said that the fact we didn’t find an agreement last year doesn’t mean that the player will necessarily leave.

Both players [Ozil and Alexis] look happy here and overall, I hope that the situation can be turned around.

I find the ‘That’s my understanding’ bit interesting, as if he’s removed from the process, which would be a bit of a surprise. Maybe he’s just leaving it in the hands of Ivan Gazidis and New Contract Bloke who we assume is doing what Dick Law would be doing if he were still here and not gone since the end of last month.

Also interesting was his response to the suggestion that given the contractual situations of both Ozil and Alexis Sanchez, the January transfer window might be a way for Arsenal to recoup some money should no agreement be found with them. He said:

Once you are in our kind of situation, you envisage any solution. Yes, it’s possible.

As I’ve written before though, it’s possible, but not very likely. The fact both can start discussions with clubs abroad from January 1st, and the prospect of a Bosman when their contracts expire, means that they’ll have far more choice if they wait until the summer. So, unless an outstanding deal is presented to them by a club that can’t be arsed to wait for 6 months, or has the finances to blow money on a player they could get for free by just hanging on, then they’re going nowhere.

Even if Arsenal wanted desperately to sell – and we all know how good we are at moving players on even during the summer – it’s more or less out of our hands. Their situations will provide plenty of tabloid fodder as the transfer tittle-tattle ramps up and goes into overdrive as we head into January, but I’d be really surprised to see either of them move before the end of the season.

For more on those two, and how their careers at Arsenal will be perceived, check out Tim Stillman’s column this week which looks at exactly that. Good reading.

There were questions about Marc Overmars, rumoured this week to be making a return, but those were played down somewhat. Asked if the Dutchman was coming back, the manager said:

‘At the moment’. We’ve got to hope things are happening behind the scenes though, because there’s a gap that needs to be filled in the wake of Dick Law’s departure, and there’s plenty to do in the transfer market over the coming months.

Wenger was also asked about Christmas Eve football, and his comments leave me in little doubt that Arsenal v Liverpool will be played on December 24th. I’ll admit I’m a bit disappointed he didn’t come out more strongly against the idea in the way Jurgen Klopp did, but I wonder if his comments were based on knowledge that Sky’s desire to play the game on that date means it’s more or less inevitable. Or that the clubs already know and the idea that we have until October 26th to find out is simply part of the charade.

I think Sky floated the idea of the 4pm kickoff so that anything earlier than that would be seen as some kind of compromise, a sop to the fans – ‘Look we do listen and care about you!’ – but I don’t think any of us are stupid enough to believe that.

It’s a date and time that will suit some people, let’s not ignore that. The idea of an Arsenal game then post-game drinks on Christmas Eve is going to sound like great fun for those whose day isn’t constrained by other priorities. For many though, it’ll be a huge inconvenience that impinges on family time, or a game they simply cannot get to because of travel or where they’re going to spend Christmas – and that doesn’t even include the Liverpool fans who have to travel down from Merseyside and back up again.

Perhaps Sky’s research shows it’ll attract a big TV audience. Maybe so, but for those in countries where they celebrate on the 24th, or in time zones which might make watching prohibitive, I wonder how it will go down.

We’ve been running a poll for match going fans and those of us that watch on TV – if you have time to make a response it’d be appreciated. As it stands, just 25% of match going fans say they’ll attend. How accurate that figure is in the end we’ll have to wait and see, but it does demonstrate some genuine opposition to the idea.

Finally for today, check out today’s Arsecast with Amy Lawrence talking about ’89 – the film’, 89 the season, and lots more. News throughout the day on Arseblog News, back with a full Watford preview tomorrow.