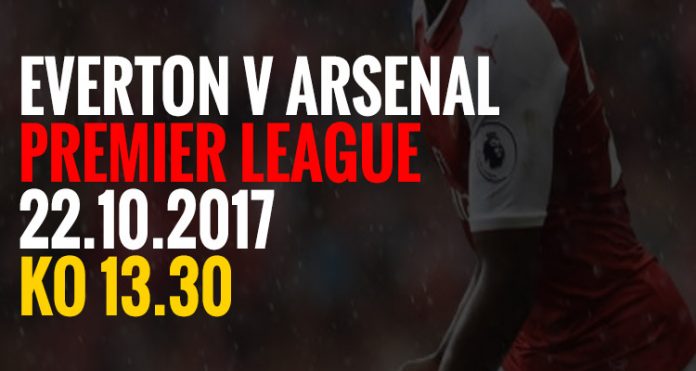 Let’s start this morning with a question. Which Arsenal will we see today?

Will it be one that comes together and responds to last week’s disappointment against Watford and puts an Everton side with just two wins from their last 12 games to the sword? Or will be it Dr Arsenal, Football Practitioner, ready to give a shot of soccerbiotics to struggling opposition that will fill them full of vim and vigour and revitalise their season?

In terms of the team, I don’t see much in the way of change from the one that went to Watford last season. While I’d be very much inclined to let Granit Xhaka pay the price for his lack of effort for their winner, I don’t know that we have much in the way of choice. Elneny? Coquelin? Not for me, and although Jack Wilshere is making a good case for future involvement, I don’t think it would be wise to play him in a game of this intensity after doing 90 minutes on Thursday.

The manager is showing caution in how he brings him back from a broken leg, and I think that’s the right thing to do given his injury record. The desire to see someone come in and play ahead of Xhaka doesn’t mean he should bin whatever plan he’s got for Wilshere. He’s someone that could come off the bench today, no question, but he’s not ready to start quite yet.

It’s something Arsene Wenger has been clear about, saying:

It’s impossible to come off that intensity and then play against Everton. Of course, I left 10 or 11 players at home and I decided to rotate at the start of the season. The time will come where the rotation can go anyway. It’s important to see that these players get stronger and stronger in every game.

We play on Tuesday again, at home so we have to have a global plan.

The X is the only thing that gives me pause for thought, but Arsene Wenger has to decide if it’s Alex Iwobi or Mesut Ozil. If it’s the former he knows he’ll get a hard running performance from a player who will make us more defensively solid but who can also contribute going forward, as well as the assurance that if he needs to change something later on he’s got the German on the bench.

Starting Ozil, which would be the first time we’ll have seen the front three with him, Alexis and Lacazette, would be an indication that he’s out for blood, looking to prey on Everton’s current weaknesses. Given their situation, and bearing in mind we lost here last season, you have to ask is this really one of those games away from home where we have to really think about Ozil’s suitability?

Do we go for it, or show some measure of caution knowing that Everton will be desperate to turn their form around and give fans something to cheer rather than get involved in violent incidents while holding their children? I think I’d go with Iwobi, but I have a suspicion Arsene Wenger will choose Ozil. We’ll see soon enough.

It’s difficult to say much on how we’re going to play because there has been such a lack of consistency this season. What I would say is that if they can get their shit together, this is a team that can beat Everton. It’d be good to see Lacazette get off the mark away from home, and for the team in general to answer some of the many questions raised by the Watford defeat.

It’s October 22nd, this will be our fifth away game in the league, and all we have to show from our travels this season is the solitary point we gained at Stamford Bridge. A decent point it was too, but we have got problems on the road there’s no doubt about it, and we have to sort them out. A win today would set us on the right path in that regard, so fingers crossed.

Everton are there for the taking. They’ll be aware of our frailties though, so we have to be prepared for a team that is, at the start at least, going to make this a scrap. If we score early, quieten the crowd, see them turn on the under pressure manager, we then have to turn the screw. Show some ruthlessness and efficiency in front of goal, and unlike Watford put the game out of their reach.

Let’s not give them the shot in the arm they need.

We’ll have a match report, player ratings, stats and more over on Arseblog News post-game. Come on Arsenal, be like the real Arsenal, not Arsenal Arsenal.