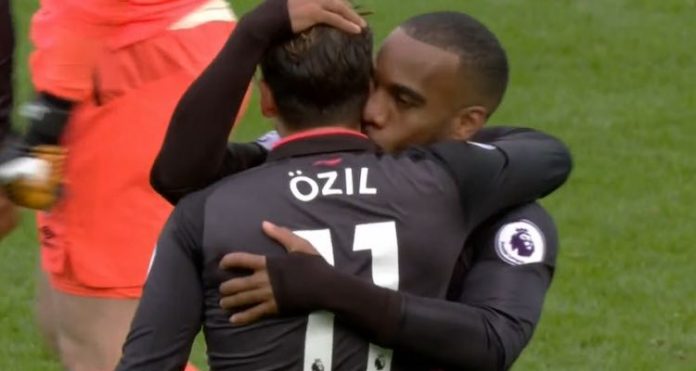 For the first time this season Arsene Wenger selected/was able to select a front three of Alexis Sanchez, Mesut Ozil and Alexandre Lacazette. The result was a goal for each, assists for the two ‘contract rebels’, and perhaps the most fluid attacking performance of the season.

Arsenal had 30 attempts on goal, and it’s no exaggeration to we could have scored twice as many as we did. A combination of the goalkeeper and poor decision making in the final third kept the score down as Everton were run ragged.

We started brightly, with Ozil creating the first of the 8 chances he made in the opening minutes for Aaron Ramsey. His shot was tipped wide. The Welshman then took the wrong option on a break when he missed Lacazette’s run in the inside left channel, but ended up presenting him with an opportunity that Jordan Pickford came out to smother.

It was all Arsenal, so of course Everton scored. Granit Xhaka’s heavy touch from a Per Mertesacker pass saw him tackled, possibly fouled, and when the ball came to Wayne Rooney it felt almost inevitable that he’d do what he did and put them in front. It’s not the first time Xhaka has been caught out this season, and it’s a problem now, but to his credit he didn’t let his head drop and he had a pretty assured performance for the rest of the game.

When it looked like it might become one of those frustrating days when the keeper repels everything, we found a way back into it. Pickford could only parry Xhaka’s shot back into the path of Nacho Monreal and the Spaniard’s finish with the outside of his foot brought us level five minutes before half-time.

Although Arsenal dominated, Everton still had dangerous moments, and it was when one of those was snuffed out that we went ahead. We moved the ball down the left hand side, Alexis spotted the run of Ozil (who had travelled over 80 yards from deep in our half), and the German’s flicked close-range header was superb.

The German’s commitment on the pitch has been questioned recently, but Wenger insisted the best way to judge him is by what he does on the pitch, saying, “When you see Mesut on the football pitch like he is today, enjoying his game like he is today, it’s difficult to believe these kind of things.”

With times tough at Goodison Park and Ronald Koeman under real pressure, Arsenal needed to turn the screw, and we had some help in that in the shape of Idrissa Gueye. Having been booked in the first half, the Senegal international can have no complaints about a second yellow for a late challenge on Xhaka, and he was shown a red card.

It meant more space for us to work with, but again finding the final ball was a bit of a problem on the break. We did get it right though as the game entered the final 20 minutes. Alexis sent Ozil down the right hand side, he pulled the ball back for Lacazette, and the French international’s calm finish gave him his first goal on the road to make it 3-1.

He was replaced pretty soon afterwards by Jack Wilshere, and we could have extended the lead even further. Sanchez put a diving header wide when he should have hit the target, while Xhaka crashed a shot off the crossbar.

We did add the deserved gloss to the scoreline when Wilshere played in Ramsey to make it 4-1 in injury time, and the final few minutes were a match report writers nightmare with two more goals to keep us going before the final whistle. Nacho Monreal’s poor back pass and Petr Cech’s lack of concentration blotted the copybook a little bit, allowing Niasse to make it 2-4, but Alexis got the goal his performance merited right at the death.

He picked up the ball from Ramsey, drove across the box to the point where you think he’s gone too wide, before slamming a shot back across goal and into the far corner to make it 5-2. I did not notice Jordan Pickford standing around shouting at him like he had earlier in the match, the Highlighter Marker looking twat.

We were tested mentally when we were 1-0 down after a very good start in the game. We couldn’t finish, their keeper kept them in the game and suddenly we were 1-0 down. It was a mental test but we kept going, we kept our focus and slowly the quality of our movement, the quality of our passing gave Everton problems. After that, with the offensive strength we have, of course that made the difference.

He was also full of praise for Alexis and Ozil, whose contribution today is a reminder of just how important these two players to this team. It’s all well and good being high and mighty and dismissing players who don’t want to sign new contracts, but the reality of our situation is there right on the pitch. That front three was devastating yesterday, and if we really want to achieve anything this season – regardless of what they might do at the end of it – we need them.

I think it also shows that contract stories etc can be blown out of all proportion and that when players are on the pitch they only want one thing, and that’s to win. I don’t know how anybody could look at the way they played as individuals, and the way we played as a team, and suggest they don’t care. Maybe it’s easy to say on a good day, but I think its incumbent on us to focus on the fact they’re professionals first, and the evidence of that was clear.

It won’t take much for that to go the other way, of course. A bad day, a poor performance and it’ll all come back to the contract situations, but they know that, Wenger knows that, and there’s little anyone can do about it.

I just want to see more of that front three, because they showed yesterday their qualities are so obviously complementary. Three goals and two assists between them is a superb return for one start. We can qualify it all we like, talk about how Everton were down to 10 men, or how Everton are struggling at this moment in time, but had another side done what we did there’d be no end of talking about their quality, so fair’s fair.

It was a great way to get our first win on the road, and while questions still remain we’ve answered some of them in emphatic style. Now it’s about shaking off the away-day shackles, making sure we kick on from here, and with three home games ahead of a trip to the Etihad to face Man City early next month, we’ve got a chance to build some momentum for what’s going to be a big challenge in Manchester.

Final thought: after expressing concerns about how we play these days, and what our style is, this performance was particularly pleasing because it felt very much like what we want Arsenal to be. If that front three can get a good run of games together, there’s plenty of potential, and perhaps we might look back on this game as something of a turning point in our season. Fingers crossed.

James and I will have an Arsecast Extra for you later on. As ever if you have any questions or topics for discussion, send to @gunnerblog and @arseblog on Twitter with the hashtag #arsecastextra.

We’ll have that for you around lunchtime. In the meantime, why not check out our video page to enjoy some of yesterday again. Until later.