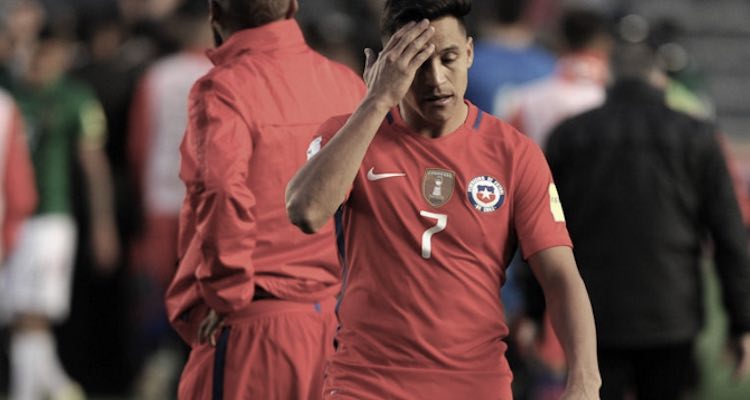 When Arsenal signed Alexis Sanchez from Barcelona in 2014, it was after a long season at Barcelona and a World Cup summer which saw Chile reach the Round of 16.

The following year he went all the way with his country to win the Copa America, and in 2016 there was centenary Copa America that saw Chile retain the trophy. This summer just gone he played in the Confederations Cup, reaching the final but losing 1-0 to Germany.

So, it’s kinda ironic, that next summer he’ll be free and easy, with no summer commitments, after Chile failed to qualify for the World Cup in Russia. We all know his contract is running out next June, so wherever he ends up when he leaves on a Bosman his new club will have the benefit of a well-rested (for once) Alexis Sanchez – something Arsenal never had the good fortune of for the duration of his career in North London.

It’s just so typical that if it came to life it would be a person called Bob Typical who would do exactly what you expect him to do in every situation. And you’ve got to wonder how it’s going to affect him. The idea of some weeks without competitive football will probably drive him absolutely nuts and, as we touched on yesterday, players who are as hugely invested in their national sides can take a while to get over stuff like this.

It might also be a case that training is a bit awkward, because despite losing to Brazil, Chile would have gone into the playoffs if not for a bizarre Peru goal. A goal scored against Colombia, with David Ospina in goal. The Arsenal goalkeeper was facing an indirect free kick in the 76th minute, their fella put it on target but it the goal wouldn’t have stood without a completely unnecessary touch from Ospina. See below.

Narrator: "Indirect free-kick, Paolo!
He takes it… GOAL!
He (Ospina) touched it!
He touched it!" pic.twitter.com/ihNUlVRT3W

Maybe it was simply his goalkeeping instincts kicking in, but had he just let the ball go into the net it wouldn’t have counted, and if Peru had failed to score then Chile would have still had a World Cup chance. The fact that Colombia have qualified will ensure that Ospina probably doesn’t care – despite a pretty terrible international break – but you can’t help but wonder what Sanchez will be thinking.

Will he like it, or shwoar it? That is the big question. I suspect he’ll be more focused on what his own side failed to do during qualification, to be fair.

In Europe, Olivier Giroud scored to ensure France’s qualification, while Switzerland become the first ever country to win 27 points in a group and not qualify automatically. They go into the playoffs which take place in November, after a run of seven Arsenal games in the next three weeks.

So, now the players return, they’ll be assessed in terms of their fitness, general mood (Sanchez and Ramsey to spend two hours each day with comfort dogs), and the manager will have to pick his team for Saturday’s early evening trip to Watford. More on that in the days ahead.

Speaking of the days ahead, we’re still awaiting confirmation of what’s going to happen with the Arsenal v Liverpool fixture scheduled for December 23rd but which Sky want to show on Christmas Eve. There’s been something of an update via the FSF (Football Supporters Federation). With fans from all clubs represented, the Premier League chief executive Richard Scudamore made a commitment that there would not a be 4pm kickoff on Christmas Eve, which I think tell us what we need to know.

I now fully expect the game to take place on the 24th, sometime earlier in the day, despite the fact it’s not what fans of either team want, nor should they have to be asked to make that kind of a choice in my opinion (on that there’s more from Daniel Storey on Football 365 which is worth a read).

I think it’s a terrible idea, for fans who go to games and for fans around the world. When you take into account time zones, and the fact that the 24th is the day on which Christmas is celebrated in some countries, it’s also a terrible idea for television ratings. I think we might see a backlash, even more empty seats, and low ratings, but we won’t know until October 19th when the picks for December are released.

It will then take a further week to make a final decision on the Christmas Eve games, which is just another show of contempt for fans when they could every easily use some common sense decision, and give everyone plenty of time to organise themselves at what is a very busy time of the year. Anyway, let’s see what happens, but I’m fearing the worst at this point.

So, the players will filter back, we can start to concentrate on Arsenal again, and there’s plenty ahead of us in the next few weeks as the fixture list shows. We should get some clarification on Mustafi’s injury before the weekend, and hopefully there haven’t been any other aches, strains, niggles, tweaks or wrenched gooches that we don’t know about.

Finally for today, in news that will please some of you, we have comments back on the site. It’s not the arses, but it’s still a place to discuss all the blogs and whatever else springs to mind. The comments form is below each post, so have at it.

I have to go buy a fridge today. Have a good one.