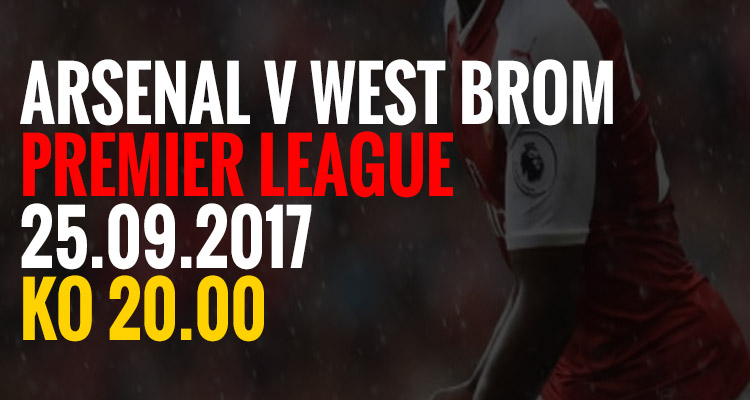 Morning all. Our next five league games are a chance to get some points on the board, and that starts tonight as we face West Brom at the Emirates.

It’s a busy week, because we play tonight, again on Thursday in Belarus in the Europa League, then we have a 12 noon kick-off on Sunday in the league again. It means that Arsene Wenger is going to have to use the full depth of his squad this week, so I think we’ll see as strong a team as possible for tonight.

I’m making the assumption that if Ozil is fit enough to train he’s fit enough to start, and that having got those minutes under his belt last week Sanchez is ready to go from a Premier League point of view as well. The midfield basically picks itself, especially against a team that will look to sit deep, but it’s important that they carry on where they left off against Chelsea last weekend.

Tonight is a different proposition, a different kind of opponent, but Ramsey and Xhaka helped provide a stable platform for a very good performance and just because West Brom might be seen as somewhat less threatening doesn’t mean we should abandon that discipline and organisation.

If that team is the one he selects, it’ll be the first time we get to see Ozil and Sanchez with Lacazette ahead of them. On paper there is a lot there to trouble defences. There’s pace, creativity, finishing ability, and for a team that played for so long with a more static centre-forward like Olivier Giroud, it should certainly make us less predictable. However, it’s about how quickly they can dovetail, so hopefully there’s been plenty going on on the training ground in that regard.

The manager has spoken again about his record signing and the comparisons to Ian Wright, but says the French international may have to toughen up a bit now that he’s in England. He said:

There are similarities. Maybe Lacazette is a bit less aggressive than Ian Wright but hopefully he will get that because in England you have to survive. Up front is a very difficult position because you get harsh treatment sometimes. He looks to have shrewdness and overall I believe if the team plays well he looks always to be at the end of some interesting movements.

He looks a smart player from what we’ve seen so far, and while you don’t want him careering around like Vinnie Jones on PCP, you could see how a bit more edge to him might benefit him and the team. But that aggression doesn’t have to be crunching tackles, it can be seen in how hard he works, and you think back to the third goal against Bournemouth the other week. It was his persistence that won the ball back in the first place, and that’s part of it too.

In games like tonight’s, where there’s bound to be a lot of Arsenal pressure in their final third as they defend well and stay organised like a Tony Pulis team does, it’s the ability to convert the chances that becomes so important. He’ll know he should have scored against Chelsea, and while he’s done well enough so far, he’s nearly two months into his career in England and it’s time for him to start making his mark consistently – especially against the teams below the top 6.

Overall, we know what to expect from West Brom. They’re solid, physical, and have some quality that can hurt you if you switch off in defensive situations. We know they’ll make it tough for us, but after an indifferent start to the season, these are the games we have to win if we want to be in the ballpark of competing for the top four at least. There was a lot to like about the way we played against Chelsea, so if we can bring much of that into tonight’s game then I think we should be happy come 10pm tonight.

We will have all the match coverage for you this evening, with reports, stats and the rest on Arseblog News after the game. There’s no Arsecast Extra this morning for obvious reasons, but James and I will have a podcast for you tomorrow. Join us for that.

ARSES UPDATE: All going well we should have the arses back up and running for you today, and with it the live blog too for tonight’s game.