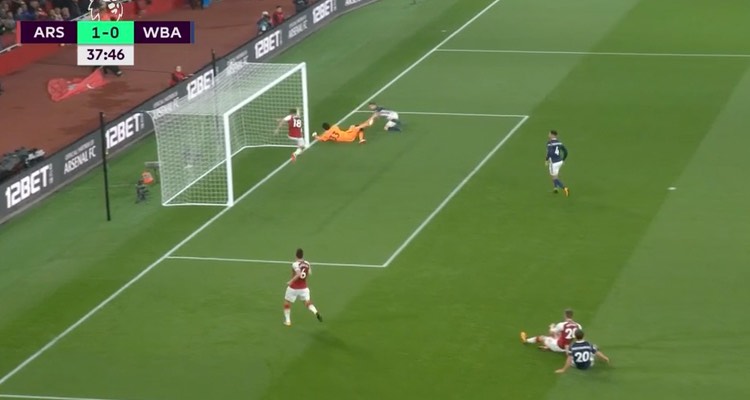 Two goals from Alexandre Lacazette, a clean sheet, three points, and a furious Tony Pulis: all things we can very much get behind this morning, but as much as I enjoy the West Brom manager’s outrage, it was understandable. I don’t quite get his focus on Alexis Sanchez taking a dive (I didn’t see it, will have to watch the replay), but the penalty incident would drive anybody mad.

Sure, the referee played an advantage, but nobody wants an advantage in the penalty area. You want a penalty, and let’s be clear, it was 100% a penalty. Over the last few weeks I’ve been accused of hating Shkodran Mustafi, which is not true. What I hate is his inability not to go sliding into tackles in dangerous areas of the pitch, mostly in and just outside the penalty area.

I find it hard to believe that this issue, this very obvious ongoing issue, isn’t something that has been brought up with him by the manager and his coaches, because he does all the time. Which makes me think he either doesn’t get it – and that’s a worry because ‘stay on your feet’ is not a particularly difficult instruction to get your head around – or he’s just ignoring them.

Either way it’s doing my head in, and last night he got lucky, and Arsenal got lucky, that Bobby Madeley inexplicably allowed play to go on instead of pointing to the spot and booking Mustafi for what was the most blatant penalty you’ll see all season. As it was Petr Cech made a great save to tip the Rodriguez shot onto the post, and whoever followed up that rebound thankfully clumped it wide.

The referee seemed disinclined – in the first half at least – to punish any penalty box indiscretions as fouls on Monreal and Alexis saw him plan on, and I thought both were decent shouts for a spot kick. Still, you can’t ignore the impact of the first goal, and had West Brom scored it from the spot we might have endured a more nervy night.

As it was we went ahead through some smart penalty box play from Lacazette. When Alexis’s free kick came back off the bar, he was in there, like some kind of trained centre-forward, anticipating the possibility of a rebound and nodding home from close range to score in his third successive home game. That kind of movement in the box is not always teachable, and it’s been a while since we’ve had a player who has that inherent quality (Robert Pires was brilliant at).

Despite the goal though, we were a bit shaky, and but for a stupendous goal line clearance from Monreal they might have grabbed the equaliser. The Spaniard’s determination to get back and cover as Rodriguez headed past Cech summed up his man of the match performance, and he continues to be one of the most underrated but most valuable members of this team. There were other chances before the break for them to score, but we hung on and played much more cohesively in the second period.

They caused nothing like the same problems after the break, and there was much more control to our performance overall. The second goal, the one that sealed the game, came from the penalty spot after Aaron Ramsey was barged over by Allan Nyom, and this time the ref had no hesitation in pointing to the spot.

I wondered who was going to take it. Would Alexis use his seniority to open his Premier League account despite the fact he’s an iffy penalty taker? He did not, and Lacazette, something of a specialist when it comes to penalties, stepped up and made no mistake. There was nothing cute about it, he just put it low and hard to the keeper’s left and despite the fact Foster went the right way he couldn’t get near it. A perfect penalty, and that was pretty much job done.

There were moments when we could have extended the lead, again our inability to move the ball quickly enough, or see the right pass, on the counter-attack was notable, but it didn’t really matter. West Brom had nothing left to offer, but for the ire of a small man wearing a baseball cap, and in the end the three points were well deserved based on our second half display in particular.

In the first half it was difficult because they are physically very strong, very mobile, they disturbed our build up and went very direct. It took us some time to adapt to that. In the second half we controlled the game much more, they dropped a little bit in their intensity and then it became more comfortable for us. Overall it finished in a comfortable way, but the first half was a bit nervy.

I don’t think it’s unfair to say that a better team might have punished us more harshly last night, and once again the moments of danger that we faced generally came from sloppiness on our part rather than scintillating opposition play. We have a worrying tendency to give the ball away unnecessarily, and it felt like West Brom knew that and were ready to take advantage when it happened. It’s no coincidence that when we tightened up in the second half their threat receded almost completely.

I don’t know if the players are being instructed to play a more high risk game or if it’s simple carelessness, but it’s been a feature of the opening weeks of this season and it’s something we have to cut out. That said, we had to win last night and we did. The schedule this week is difficult, with a trip to Belarus then an early kick-off on Sunday, so the manager will need to rest some legs for the Europa League, and count on more or less the same team that played tonight to do the job against Brighton.

And even if we are riding our luck a bit at times, it’s four clean sheets from our last five games, and that’s a decent platform on which to get results. So, we move up the table, get the points we needed, and Tony Pulis is probably still furious. I’m good with all that.

James and I are recording an Arsecast Extra early this morning, so if you have any questions send them to @gunnerblog and @arseblog on Twitter, or leave a comment on this Facebook post. We’ll have that ready for you mid-morning.