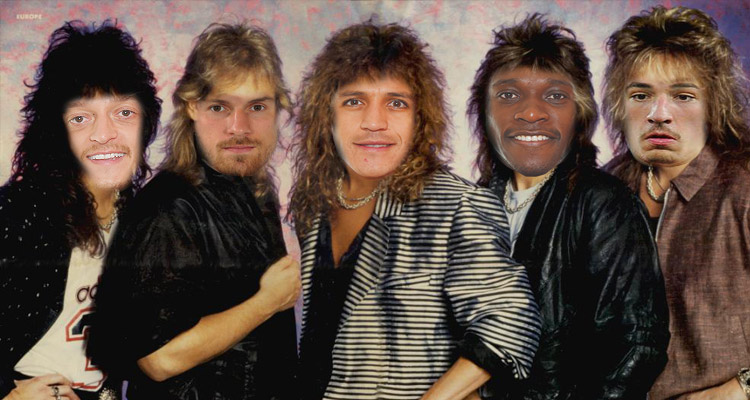 There was some strange competition on the TV last night. Some thing called the ‘Champions League’. Can’t say I’ve ever heard of it. It’s supposedly a league for champions, but from what I could see many of those teams were not champions at all. What a complete swizz, these people are taking the mickey.

It’s like having a Justice League that simply does not dispense justice, or a Premier League that isn’t that Premier at all in the grand scheme of things and instead is made up of teams whose performances and qualities are far below what one would expect when you think of the word Premier. Anyone who watched any of West Ham v Huddersfield the other night will know what I’m talking about.

Tonight more not champions at all will play other not champions in the slightest, all sponsored by a watery beer that nobody could consider the champion of cool, refreshing alcoholic beverages, and a global energy company focused on geological exploration, production, transportation, storage, processing and sales of gas, gas condensate and oil, sales of gas as a vehicle fuel, as well as generation and marketing of heat and electric power.

Who would want to be part of that charade? Not me, let me tell you. I’m a purist, and our participation in the Europa League is something we can all get behind. There’s no misleading branding going on here. This is a league made up of clubs from Europe, thus a Europa League. There’s no pretence, no fallacious claims of achievement and triumph, and no overblown, up its own arse theme music adding a veneer of pomp and circumstance to the whole thing.

No, the theme music for the Europa League is a song called ‘Europe is European’ by Swedish rock band Europe, whose lead singer Joey Tempest has changed his name to Bob Brussels, just to be more European. This is the true essence of European football. As the so-called Champions League hosts teams nobody has ever heard of like Qarabag, Apoel Nicosia and Sp*rs, the Europa League has the Arsenal, Red Star Belgrade and FK Grocer’s Itch.

I know what I’d rather be watching on Thursday nights when I should, in fact, be doing a podcast for Friday morning but obviously I can’t because there’s a game on at the time I would normally be recording thus rendering anything before kick-off out of date and redundant.

All of which is to say it’s Europa League week. Our first ever foray into this competition in its current form. Previously it was the UEFA Cup, but with a bit of the European Cup Winners Cup in it too, like a child in the womb that consumes its own twin and is born with an extra nipple (and possibly a bit of a tail, don’t worry though, they can lop those off pretty easily these days).

With Chelsea at Stamford Bridge on Sunday Arsene Wenger has to think long and hard about his team selection. There’s certainly room for rotation, with the likes of Per Mertesacker, Rob Holding, Calum Chambers, Jack Wilshere, Mohamed Elneny, Alex Iwobi, Theo Walcott, Olivier Giroud, and others all potential starters depending on fitness and how seriously the manager wants to take the game.

I think the big issue we face is what to do with our wing-backs. On the left Nacho Monreal would, under normal circumstances, be great back-up for new signing Sead Kolasinac, but at the moment the Spaniard is part of our first choice back three, and likely to get the nod on Sunday. And of course there’s no Oxlade-Chamberlain to pffffff hahahaha, sorry. But seriously, it’s something Arsene Wenger has to give some real consideration too.

On the other side, who we have earmarked to deputise for Hector Bellerin is another grey area. Mathieu Debuchy remains at the club but having not played for so long there must be fitness issues, not to mention I don’t think I’ve ever seen him play as a wing-back and it is a very physically demanding role.

The manager spoke about the potential of Reiss Nelson to play there, saying:

When you see what he’s doing at youth level, it’s clear he’s a very talented young man, but it does look like he’s much more suited to a role in the front three than at wing-back, a position which would surely offset his attacking threat considerably. Considering that’s the strongest part of his game, and he’s not a natural defender, it would give you pause for thought. Defending is a very important part of the wing-back’s game, and we saw even with Oxlade-Chamberlain that a lack of defensive instincts can be exposed.

The other possible candidate is Ainsley Maitland-Niles, who has been played there previously, but I worry about him for the same reasons. He had some games at the back during pre-season and he doesn’t look like a player who defends as well as you would you want. Maybe it’s something they’ve been working on in training though.

Still, we might get a better idea of what Arsene Wenger is when he meets the press later this morning. We’ll have full coverage of that over on Arseblog News with all the team news and updates etc.

That’s your lot from me this morning. Have a good one.