It’s been 5 months since Arsenal adopted the en vogue 3-4-2-1 formation, switching to three central defenders for the first time since the manager’s maiden season. Wenger was adamant during pre-season that the team would adopt this shape again for the outset of the current campaign and he used it for the duration of pre-season.

Still, it is difficult to be convinced that Arsene sees this as his long term formation. When he adopted it back in April, he pretty much admitted that it was a confidence trick for his players. The adoption of the 3421 was borne out of a period of crisis at the tail-end of a season threatening to derail, so the suspicion remains that this is something of an interim system.

Indeed, many were surprised to see the back 3 survive August’s Anfield slaughter, during which Wenger switched to a back 4. Whilst the three centre halves were not the issue against Liverpool, the amount of cover they were afforded by the midfield certainly was. A trio of Ramsey, Xhaka and Özil is not going to bring you a great deal of off-ball rigour. Oxlade Chamberlain was hardly the most fastidious in this respect either.

Wenger has described the back 3 as an almost exclusively defensive measure and initially, it gave the Gunners a little more security against teams that like to gallop into the spaces vacated by Arsenal’s full-backs. But as Michael Cox explained on last week’s Arsecast, eventually opponents familiarise themselves with your setup and begin to probe for weaknesses.

Just two days before Arsenal’s midfield was stripped naked at Anfield, Jonathan Wilson wrote a very prescient piece about the Gunners’ disregard for ‘the red zone.’ That is, the area of the pitch between the centre circle and the 18 yard box. Lewis Ambrose dissected this last week and Andrew highlighted that, even in the accomplished performance against Bournemouth, there were times when Arsenal’s midfield cupboard was worryingly empty.

It remains a mystery that Arsene Wenger did not regard the acquisition of a central midfield player as an urgent priority this summer. But in the absence of a quality connector, the question remains as to how Arsenal close this midfield gap. I think a 4321 shape- AKA ‘the Christmas tree’, might be worth a look.

For a start, it maintains the shape of the attack, with Alexis and Özil taking up the half spaces behind the striker. Both players found a kind of happy medium in those roles at the end of last season. It allows Mesut to drift from central areas towards the touchline where he can find pockets of space. It also satisfies Sanchez’s puppyish desire to drift from wide to central areas and become involved with the build-up play.

Arsenal have, by and large, attacked promisingly in recent months, with the exception of the capitulation at Anfield. Behind them, adopting the Christmas tree formation would simply involve moving one chess piece. At the moment, Shkodran Mustafi plays at the centre of the back 3. He operates a little like David Luiz does in the same role for Chelsea.

Mustafi is preferred centrally because of his ability to play penetrative passes between the lines. Here Mustafi operates as a kind of hybrid between a centre half and a ball playing midfielder. The issue at the moment is that the three centre halves are overloaded by poor off ball play by those in front of them.

Bringing Mohammed Elneny or Francis Coquelin into the midfield with Xhaka and Ramsey potentially helps to allay that problem. Xhaka and Coquelin or Elneny sitting in front of the defence could tighten up that ‘red zone’ a little and not expose Xhaka quite so much. The Swiss thrives on security and control, because once he starts chasing the ball, or senses that he has lost control of the situation, he tends to panic and make rash decisions.

Effectively, sacrificing a centre half for a defensively minded midfielder is shifting the deck chairs a little, but it takes some of the pressure off of the defence. Even if you do have one fewer defender, potentially you have greater control and a reduction in chaos if the central zone is patrolled more tightly. The question as to who to drop into this midfield ‘firefighter’ position is an interesting one.

In home games against lesser sides, Mohammed Elneny’s superior ball retention could be prioritised. Elneny was trialled in Mustafi’s hybrid central defender / first playmaker position in pre-season. Wenger prefers to have two ‘number 6s’ at the base of his midfield as opposed to a clear number 8 and number 4. Arteta and Song operated in this fashion for a few seasons to good effect.

This means the two deeper midfield players swap constantly in order to avoid being marked by opposition attackers. One drops deep to collect the ball from the defence, while the other pushes on and takes a marker away. This did not work so well with Xhaka and Ramsey because their skillsets are so defined. With Xhaka and Elneny however, this pivoting of positions can work.

One of the central tenets of Wenger’s philosophy is to push his midfield up and give his team the space to build from the back. This worked most notably in the 2017 FA Cup Final. Aaron Ramsey kept pushing beyond Kante and Matic, only to then drop back in front of them to collect the ball from Xhaka. The result was that both Chelsea men were confused about their positioning, allowing Mesut Özil plenty of space to exploit. 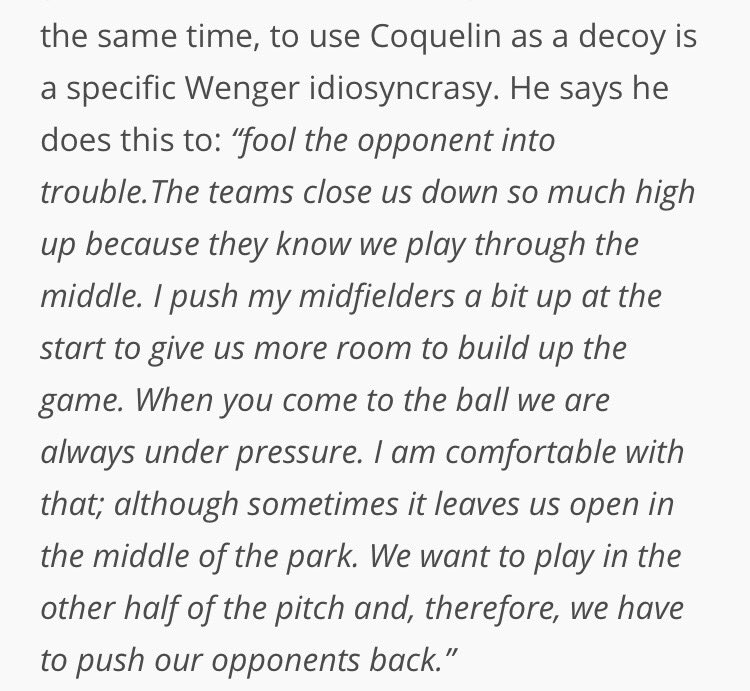 For games against bigger opposition, Francis Coquelin would probably be a better bet than Elneny. This midfield role would require a lot of defensive diligence, especially to cover for whichever full-back has pushed on to attack. Elneny has the energy levels for the task, but he is often easy to dribble past and lacks the defensive diligence Coquelin has.

I have often thought that if you could combine Elneny and Coquelin’s better qualities in one player, you’d have an excellent screening midfielder. The presence of either frees Ramsey up to push forward when the team are in possession. The Welshman has the lungs to drop back into midfield out of possession too.

The addition of Coquelin or Elneny gives the Gunners an extra injection of energy and mobility. It also creates a connecting line between the three midfielders in the build-up phase. Mustafi can either look for Xhaka or Elneny a touch ahead of him, or else he is capable of going through the lines to Ramsey. That creates problems for the opposition in terms of their spacing.

Of course, the fundamental drawback of the ‘Christmas tree’ formation is that it lacks width. This would need to be worked on at London Colney with careful interchanging of positions. There is a lot of pressure on the full-backs to cover ground to provide the wide areas. Arsenal need to ensure they only entirely commit one full-back at a time and Coquelin or Elneny need to be alert enough to cover the space they leave behind.

Alexis and Özil are already accustomed to their roles and generally have a good handle on when to move wide and support the full-back and when to occupy more central spaces. Ideally, Arsenal should have bought more of a specialist ‘connecting’ midfielder, but they didn’t, so they will have to make do with what they have until January at least. I am not entirely convinced Wenger will adopt this 4321 formation, but I think a Christmas tree could bring Arsenal some early season cheer.