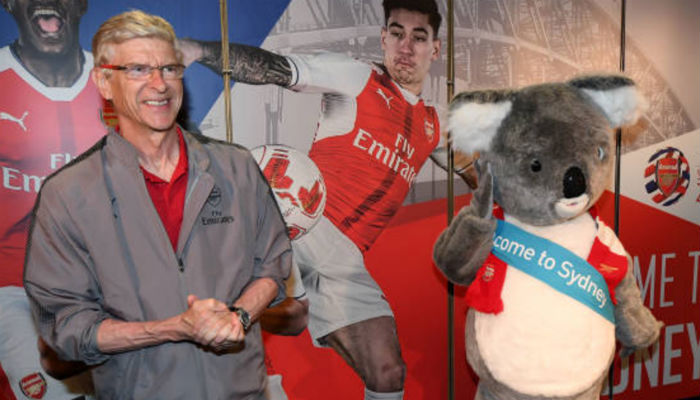 Good morning from a damp and grey Brixton…

After a six-week hiatus in media sparring, Arsene Wenger’s first press conference of pre-season was highly anticipated. And it didn’t disappoint.

After 24 hours in transit, a photo call in front of the Sydney Opera House, a chance to hold a surfboard and a handshake with a giant, cuddly koala bear, the boss sat down alongside some of his senior players to field questions.

After a couple of easy ones from the in-house editorial team, matters quickly turned to his summer transfer business and the on-going contract negotiations with Alexis Sanchez.

The boss joked when asked about the Chilean’s contract, “That’s a question I didn’t expect today. The pressure starts again, the first press conference and we are there!”

He played a straight bat; focusing on the fact his star man is still under contract. When quizzed again later he was more bullish, making clear that his star man hasn’t asked to leave, that he won’t be allowed to join Manchester City and that a renewal isn’t out of the question:

Per Mertesacker also chimed in stating Alexis will ‘definitely stay’ at the Emirates. One thing is clear, having once been favourites to sign Sanchez, Bayern Munich finally gave up their pursuit. Yesterday they announced a two-year loan deal for James Rodriguez instead. It looks like City or bust at this point.

After quick business recruiting Lacazette and Sead Kolasinac, both of whom came in for praise, the boss admitted he’s not necessarily done with his cheque book:

“I am open to get some more signings, but it is not easy to find the players who can strengthen our squad, because we have top-quality players.”

It’s pretty obvious he wouldn’t mind signing one or both of Monaco duo, Thomas Lemar and Kylian Mbappe, but he was reticent to suggest that the club were anywhere near doing deals. On Mbappe, he sounded quite pessimistic, predominantly because of the competition for his signature.

“He’s a player who, when he gets up in the morning, can choose where he wants to go.

“There are not many players with that kind of luck, because he’s only 18 years of age and has the whole of Europe rolling out a red carpet for him.”

Olivier Giroud, who has been linked with a move this summer, was also the focus of attention.

“He has a great value to the squad and I think as well he is a great lover of the club. He loves the club and has always been very determined to stay.”

Giroud will get the chance to play alongside international team mate Lacazette in the coming days with the boss confirming his new boy, who was yesterday given Lucas Perez’s number 9 shirt, will make his debut against Sydney FC on Thursday. I can already smell the opportunity to deploy a Kylie Minogue ‘Laca-motion’ pun.

That game should see Arsenal deploy a three-man defence, continuing the tactics that were implemented so effectively at the tail end of last season.

Wenger suggested he might tinker a bit on the formation front, but you suspect that’s down to a lack of defensive personnel on tour with Rob Holding, Shkodran Mustafi, Gabriel and Calum Chambers not available.

He said: “At the moment, in pre-season, we are in the continuity of the end of last season. In some games, we will play with four at the back and some with three, but at the start of the season [against Leicester] we will certainly play with three.”

I think the key for the season ahead is for us to be flexible and comfortable enough to deploy both formations, depending on the circumstances and opposition.

No doubt we’ll hear a bit from the boss after tomorrow’s match, but for now, that’s your lot.

Assuming his Jamon Ruffle smuggling isn’t uncovered by customs, Blogs will be home from Spain this afternoon and back in action tomorrow. Cheers for having me and enjoy your Wednesday.