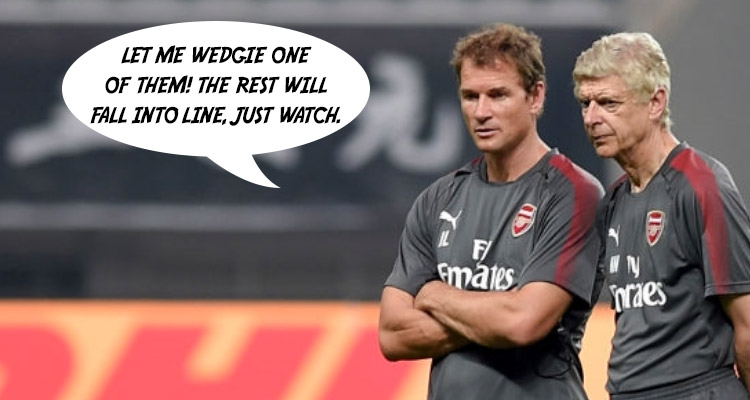 Good morning. Just to confirm that we have not bought anyone or sold anyone. We almost bought and sold someone yesterday but then we didn’t.

Former hot prospect Wellington Silva went to Brazilian Fluminense on a free transfer last summer, but we inserted a clause into his contract which said we could, if we wanted to, buy him back for a fixed price. With French side Bordeaux interested we put that into action, and had everything gone through we would have made a cool €1.5m profit on the deal.

However, the 23 year old arrived in France with an inflamed pubis – we’ve all been there – and promptly failed the medical. There were worries that we would be stuck with him but it turns out it was all dependent on everything going without a hitch and he’ll be re-registered as a Fluminense player later this week. No big deal really.

Sadly though, not having that €1.5m has put the rest of our transfer business in serious doubt. Last year that was almost enough to buy you a Rob Holding. This summer, as fees rocket, the best you could get for that is Grant Holt’s right foot, complete with his gout afflicted big toe.

Speaking of out of control transfer fees though, this did make me laugh from the BBC:

That is not so much the pot calling the kettle black, as the pot releasing a concept album about how black the kettle is, then turning it into a long-running stage show like Riverdance and touring the world to play in packed opera houses and concert halls before selling the rights of the show to Christopher Nolan who then makes an interminable three and a half hour movie about how the Pot calls the Kettle black but then **PLOT TWIST** it turns out they were both black all along – of course we knew that already but at least this time we didn’t have to travel through space and time to end up behind a GODDAM BOOKCASE YOU WANKBASKET.

Sorry, Interstellar still annoys the shite out of me.

Real Madrid, according to Marca, agreed a world record fee for Kylian Mbappe yesterday, claims that were denied by Monaco and now Man City are trying to buy him too because Pep hasn’t spent enough yet. Just the couple of hundred million so far, or thereabouts. I do like Pep but my view of him has been damaged by the fact he spent £50m on Kyle Walker. Like, you don’t pay €10,000 for a Big Mac just because you can.

If Monaco do sell Mbappe, does that make our ongoing pursuit of Thomas Lemar more difficult? On the one hand, Monaco will be so cash rich they don’t have to sell anyone for years, and there must come a point where they say ‘enough’ in terms of departures. On the other, they’ve made it clear that if you show them the money they’re prepared to let their best players go. Are we gonna send our Dick over there with a bag full of cash? Let’s see.

Meanwhile, former players have been talking about the impact that Jens Lehmann might have on the squad this season after the German was appointed one of the first team coaches. Robert Pires says:

You need to have a competitive side and Jens has always had that. He’s a great professional. He’s a German too, so he has his own rules. Sometimes he is very strict, but you need to have discipline in the dressing room and Jens is the man to bring that.

Maybe sometimes people saw him do things in the past and had a different interpretation of things but the way he was with us, sometimes we laughed.

I love this: ‘Sometimes we laughed’. I think that’s gotta be the inscription on Lehmann’s headstone.

The subtle implication of that though is, ‘Sometimes we laughed, most of the time we were terrified.’

Even Mathieu Flamini got in on the act:

When I first arrived at Arsenal I felt very comfortable because we had a French manager and lots of French players. Everyone made me feel very welcome, but in the first day of training I had a run-in with Jens. I scored a goal past him in a training game, a nutmeg, and he hated it.

The next time the ball came to me in the area, I looked up to see if I could pass it to a teammate but all I remember is seeing this shadow looming over me, and when I woke up I was in the medical room flat on my back. Apparently I had been unconscious for two hours, and I had a terrible headache.

Arsene Wenger came in to see if I was ok, and Pat Rice was there to reassure me. I was very groggy and after a while I went back to the dressing room to get changed thinking everyone else would have gone home. Jens was there. He looked at me, smiled sympathetically and held out his hand as if to shake it to say sorry.

Instead, he grabbed it, pulled me close into him and squeezed me so tight I could barely breathe. My nostrils filled with his Westphalian musk and he whispered ‘Do that again, and next time you’ll never wake up.’

He was such a positive influence on me.

So, it sounds like the lads, often accused of being a bit soft, a bit nicey-nicey, will have plenty to contend with on the training ground this season. Woe betide the first one to underperform in a drill that he’s set out. Rather then than me, I can tell you.

Right, all the exciting transfer news throughout the day over on Arseblog News. More from me tomorrow.

As a new keeper arrives, Jack Wilshere announces his departure