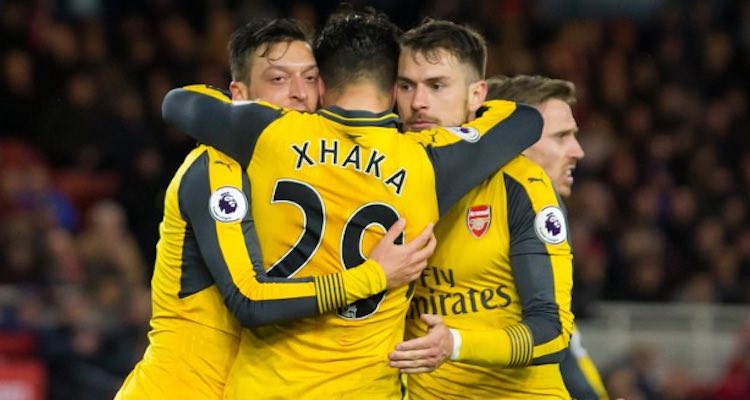 Last week I wrote about how I feel the area of the squad that requires the most attention in the transfer market is central midfield. So today let’s examine our options there, and what we might need to do to make us better.

We finished last season with a pairing of Granit Xhaka and Aaron Ramsey, and for the most part it worked well. When the Swiss international signed last summer, I thought that the manager had this partnership in mind but for various reasons it didn’t work out.

Ramsey was injured at the beginning of the season, missing over three months from August to the end of October. Xhaka, meanwhile, took some time to settle in and even Arsene Wenger seemed unsure about what kind of player he’d bought describing him initially as ‘box to box’ midfielder, (which he’s not) before recategorising him as ‘deep lying playmaker’ (which he mostly is).

His disciplinary issues meant the team had to be re-jigged during his absences, but even when he and Ramsey played together something wasn’t quite right. The move to the back three towards the end of the season suited them both, as did the continuity because it can take time to build up an understanding with a midfield partner. As things stand they remain the first choice midfield duo in my eyes, and if fitness and ludicrous red cards don’t hinder them too much, it’s a partnership I quite like.

After that we have Francis Coquelin, who is eager, hard-working, willing, and tenacious, but ultimately limited on the ball. I don’t think he’s as bad as some people make out, but he’s never going to give you much more than the basics. Sometimes those are necessary, there’s a time and place for what he can do, but increasingly he feels like an option for the last 15-20 minutes of a game in which you need to dig in, rather than a regular starter.

Rumours yesterday that Galatasaray have come to town to negotiate the transfer of Mohamed Elneny need to be taken with a little pinch of salt, but ultimately it wouldn’t surprise me too much if the manager was prepared to sell. He started just 8 Premier League games last season, and when you consider how many games Ramsey, Cazorla, and Xhaka missed for various reasons – not to mention Jack Wilshere wasn’t even at the club – that suggests he’s a player in whom Arsene Wenger is not 100% convinced.

He’s tidy, generally very safe on the ball, has a great engine and will run all day. I think he’s decent back-up, the kind of squad player you’d want, but I think there’s something about him that Wenger isn’t sure about. He’s kind of a midfield Lucas Perez, someone who generally performs well enough when given a chance, but is easy to leave sidelined.

[I wonder is there some correlation between Elneny and Gabriel, two players whose signings were reportedly highly influenced by StatDNA, and the manager’s lack of faith in them.]

After that we have Santi. Poor, brilliant, knackered Santi. Obviously I hope we see him again in red and white, but the chronic nature of his Achilles problems – which have required multiple surgeries in the last 12 months – means that we’re unlikely to ever see him at his best again. He’ll be 33 in December, and while players these days last longer than they used to, he’s already into the September of his career. The work he needs to do to get match fit should not be underestimated.

Then there’s Jack Wilshere, and I stand by my assertion that agitating for a loan move last season was a big, big mistake. For all the justifications of how it might work for his fitness, the best thing for his Arsenal career would have been to stay. There would have been enough football, he could have worked his way slowly back to full fitness, and with the Arsenal midfield far from settled in terms of personnel, he could have fought his way back to importance.

Instead, he asked to go, and I think he burned his bridges. It’s sad really, the connection he has had with the club from a very young age appears to have been irreparably damaged. I know we can’t read too much into what players do on social media, but there wasn’t a mention of Arsenal winning the FA Cup back in May but he can congratulate Joe Hart on a move to West Ham. There’s no hint of Arsenal in his profile, and by all accounts he’ll be allowed to leave. He was rather spuriously linked with a Turkish side, Antalyaspor (me neither), yesterday, while Swansea are reportedly interested too.

So, we’ve got a decent, but improvable first choice pairing. A back-up option in Coquelin, a player that the manager doesn’t seem to rate as back up to the back up (and who has been played at centre-half during pre-season), a chronically injured genius, and Wilshere.

I’d challenge anybody to convince me that this is an area that isn’t in need of an upgrade. I wonder if Arsene Wenger’s interest in Thomas Lemar is because he sees him as a Cazorla replacement in that area. From what I’ve seen of him, it might be a little early in his career for that, and it’s hard not to wonder if we need to add a bit more power and physicality above all else.

We were, once more, linked with Sporting’s William Carvalho, a player who has long been on our radar (supposedly). There were issues with his rights, in that he had one of those complicated situations where a certain percentage of this transfer rights were owned by a third party, and ‘super agent’ Jorge Mendes was involved in that.

He is an agent that we simply never deal with, perhaps because of his connections to Jose Mourinho, but I can’t remember Arsenal ever signing a player from his stable. The good news regarding Carvalho is that those issues appear to have been sorted and he has new representation. The bad news is that he’s now under the auspices of Pere Guardiola, brother of Pep, and the man who was representing Luis Suarez at the time of the £40,000,001 thing. And that’s assuming we’re even interested in Carvalho beyond the silly season paper-talk that’s so pervasive at this time of the year.

I know people will also point to Alex Oxlade-Chamberlain as an option, but I can’t see him in there for us. Perhaps as one of the two behind the striker, but not deeper than that, and I think Wenger’s reluctance to ever play him there unless he has literally no other option tells us plenty about that. The contractual wrangles appear to be positional rather than financial, and as he’s rejected two offers it seems clear he hasn’t been given any assurances in that regard.

Ultimately it seems obvious to me that if we want to take proper advantage of our strong stance on Alexis Sanchez, and to help us make up the gap between a fifth and first placed finish in the Premier League, the engine room of this team – as it has done for some time now – really requires some investment. Not a stop-gap, not back up, not depth, but real first team quality.

Let’s hope that’s something that’s on the agenda as we get down to business between now and the start of the season.