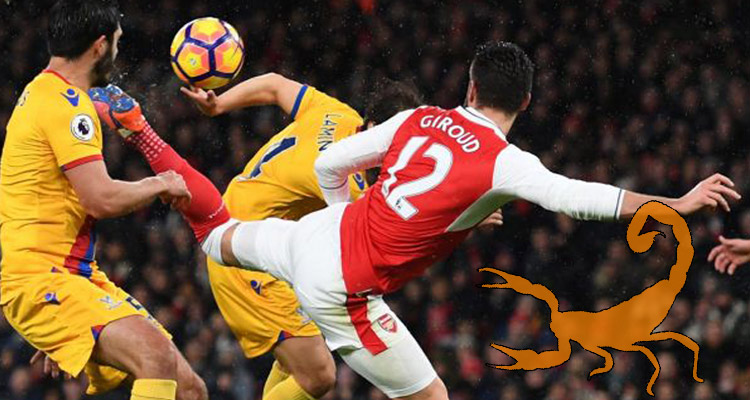 Some very quick Sunday witterings for you as I’ve woken up after being bitten on the leg by something. By the size of the chomp marks on my leg, I can only assume it was a massive scorpion of some kind and I’m telling you now it better have been subjected to a high dose of radioactivity before it chowed down on my leg so I can assume its powers and become a superhero of some kind.

I don’t know exactly what powers SCORPIONMAN would have, probably the ability to score ridiculous goals against Crystal Palace and being able to hide in explorers boots and then sting them when they put the boots on, but I’m ok with that. Considering at this moment in time I have no superpowers at all, anything would be an improvement.

There doesn’t seem to be a lot happening, even though there’s football going on. World Cup qualifiers, no less, and Alex Oxlade-Chamberlain scored a goal for England as they drew 2-2 with Scotland. That’s nice for him, I guess. You can watch it here if you like.

Meanwhile, Arsene Wenger is said to be ‘pessimistic’ about our ability to sign Kylian Mbappe from Monaco. Join the club there boss. I think we all understand that other clubs can offer more financially, and more in terms of Champions League football, and it’s the lack of a top four finish that’s said to be a particular sticking point.

What we should do is get Thierry Henry and Robert Pires to have a good chat with the lad, tell him what a great place Arsenal is and how it would be the best place for him and then throw as much as we can at the deal. If that doesn’t work then we’ll have done as much as we can, at which point we just hope he decides to either stay at Monaco so we can have another go next year, or goes to a club elsewhere in Europe rather than in England.

Meanwhile, some more Mbappe crossed with a bit of Alexis Sanchez:

#PSG have given up on Alexis Sanchez, who prefers #Bayern or #Arsenal stay. New sporting director has now made Mbappe no1 target (L'Equipe)

Does that leave Bayern as the only real suitor now? I’m not even considering another Premier League club because, as I said the other day, the idea of selling him to Man City or Chelsea is absolutely preposterous and just cannot happen. Whatever happens, let’s hope we get some clarity quickly and I think we will because as a football club we simply don’t allow situations drag on for ages and ages without dealing with them in a prompt and efficient way.

Elsewhere, we’re being linked with a Russian midfielder called Aleksandr Golovin. He plays for CSKA Moscow and can operate centrally or on the left. Some other fun facts about him:

All in all, a very interesting guy you’d have to say, but I’d be quite surprised if we were to sign him. I mean, we’ve got all our eggs in one Mbakset right now, and unless this lad is some kind of prodigious prodigy, we should probably be looking elsewhere. Anyway, we’ll see.

Right, that’s as much as I’ve got this morning. I was just Googling pictures of scorpions and there was one of an almost transparent scorpion and you can see the hairs on its stingy-tail and stuff and it made me feel a bit sick, so you’ll just have to make do with Giroud doing his thing.

Till tomorrow when we’ll also have an Arsecast Extra. Until then, have a good Sunday folks.