Yesterday saw the end of an era. Yaya Sanogo is an Arsenal player no more. Some might think this an irrelevance, but nothing could be further from the truth.

He joined in the summer of 2013 after Gilles Grimandi had scouted the shite out of him and recommended him to Arsene Wenger. I’m not exactly sure how, because he’d barely played in the year before he joined due to injury, but as we all know the boss is not put off by things like knackered knees, clapped-out cartilage, loose ligaments or feet that appear to be on the wrong way around.

“Wenger told me I would get opportunities and reassured me about my injury. He told me he had followed me for years. That meeting was very important and today I am an Arsenal player.

“I am 20, I had not played for a year and a half, I had scored some goals and Arsenal had contacted me. Could I really say no? I don’t believe so. It will be a magnificent adventure.”

It was reported that Arsenal would pay Auxerre £450,000 in compensation, or, as our Arseblog News report said at the time, “Three weeks of Higuain’s wages … ?”.

Anyway, there was nothing atypical about this kind of signing. A player in whom only Arsene Wenger can see the potential coming in on deal from France, it felt like we’d been there before.

He made two appearances between August and February. Nine minutes as a sub in a Premier League win over Fulham and half an hour against Fenerbache in the Champions League. That was it. Then, after Olivier Giroud had been left out of the side for disciplinary reasons, he was thrust into action in important games. Thrust like a new born fawn into a field of lions, his gangly-legs all askew but with a willing heart and a desire not to be torn apart and to have his organs feasted upon.

There were no goals, no assists, none of the end-product nonsense you associate with a forward, a so-called ‘striker’. These things were not part of his game. And then came his finest moment. With Arsenal 2-1 down in the FA Cup final against Hull City, Sanogo was introduced in place of Lukas Podolski. The German had been largely ineffective on the day, but had 12 goals to his name that season.

That mattered little as Wenger’s master-plan unfolded before our very eyes. The young Frenchman, now more new born gazelle than a new born fawn, came on and created chaos. Not a single Hull City player knew what he was going to do. Nor, it appeared, did any of his Arsenal teammates, but he careered around the pitch causing mayhem wherever he went.

If he were to take his name from the Tintin books, he would called be CAPTAIN HAVOC. He even bamboozled the referee who awarded Arsenal a corner that probably should have been a goal-kick from which Laurent Koscielny equalised.

He was involved in the winner too. As Arsenal put together a slick passing move, the ball came to Sanogo in the box, and with two defenders around him he bamboozled them by getting it deliberately stuck between his feet before deftly playing it to Giroud who back-heeled to it Ramsey who poked home the winner. What craft, what vision, what an athlete.

Sure, the next three years were pretty much a write-off. He scored his only Arsenal goal against Borussia Dortmund, and then had loan spells at Crystal Palace, Ajax, and Charlton – none of which ever worked out. His injury problems resurfaced and he didn’t play a single game last season, and now he is gone.

But let’s not forget that day at Wembley when he played his part in breaking that nine year trophy drought. Let’s not forget that on the eve of that cup final, he SCORCHED Jose Mourinho with a Tweet that for a long time on the day of the game looked like it would come back to bite him on the arse:

Let’s not forget he’s so unique that Arsenal don’t even have him in the player database despite having Bacary Sagna in there three times: 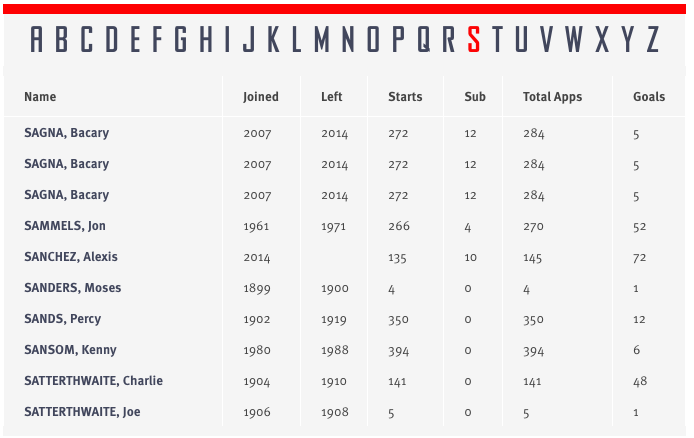 His stats are so potent that in this small segment
He made all of the ladies in the area pregnant.

And let’s not forget he didn’t sign himself, he didn’t pick himself, and while it was obvious fairly quickly he was never going to be one of those diamonds in the rough that Wenger had found before, he wasn’t a bad guy or a messer. Just a player whose career didn’t take off but who still won more medals than the Sp*rs squad combined.

I hope he has an injury free future and plays some regular football somewhere else. And all that’s left for me to do now is thank him for what was, truly, a magnificent adventure.

Previous articleAlexis has another busy summer as his agent takes care of business in London
Next articleSunday round-up: Mbappe, Alexis, a Russian midfielder and hungry scorpions