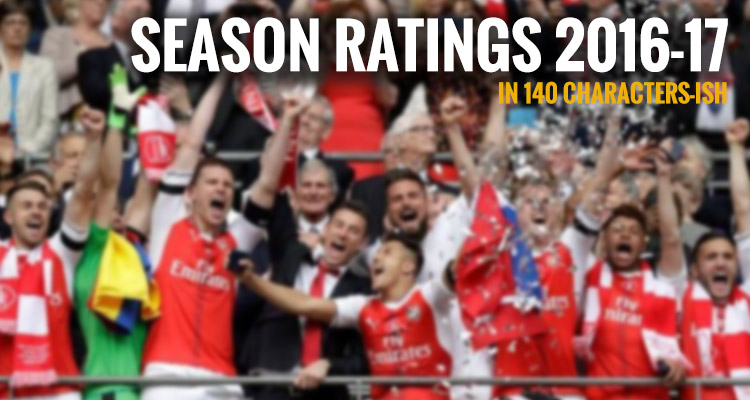 Just a note that I’m using the grading system we have in school where A is the best, obviously, D is a passing grade, and anything below that a fail. I’m trying to combine their performances with their overall influence, and how the season went for them. Their marks are individual, based on expectations of them, rather than comparable with teammates.

And in the end there’s no right or wrong, these are subjective ratings. Don’t get personally offended by them, instead feel free to discuss them on the arses (our comment system). Players who went on loan but played a game for us, like Jack Wilshere or Calum Chambers, are not included.

Petr Cech: Whether it was his own doing, or because of the tactical shift, had his best spell of the season around the time we moved to a back three. Yet to save a penalty, but it’d be better if we stopped giving away penalties. C

David Ospina: The cup keeper shipped 10 against Bayern Munich, but was generally fine when he played. Got the nod for the FA Cup final, and if tradition follows he’ll be off this summer. C

Emi Martinez: Played five games all season, at this point he definitely needs a loan spell at a decent club whether that’s in England or abroad, because he’s 24 and needs games. C.

Hector Bellerin: Struggled with injury for quite a while, and suffered a loss of form before finding some vim again towards the end of the season. Could do with the summer off, will be away with Spain though. C+

Carl Jenkinson: Brought back in for a while when Bellerin was out. Didn’t play well, but didn’t perform as badly as some said. His time is very much up though. D-

Mathieu Debuchy: What a waste of a season from his point of view, and a waste of wages from the club’s. Made 1 appearance that lasted barely 20 minutes before injury sadly struck again. Should have been sold last summer. E.

Shkodran Mustafi: Started very well, but as Arsenal hit something of a wall in terms of form, so did he – like many others. Feels like the continuation of the back three will suit him. C+

Laurent Koscielny: Captain for much of the season, his departure during both Bayern games had a profound impact on the team, highlighting his importance. More consistent than most. B.

Gabriel: Had some very good performances, Man City in the FA Cup semi-final, for example, but you always feel like there’s a mistake in there somewhere. Injured, so unlikely to be going anywhere this summer. C.

Rob Holding: I think he’ll have enjoyed his first campaign, despite having not played for long periods. Played a big part in the semi and final, loves a good song, you know, and there’s room for improvement. B+

Per Mertesacker: Hard to rate because he was out for basically the whole season. His epic contribution in the FA Cup final merits inclusion though, if not a rating. Bfg

Nacho Monreal: I think he’s been fantastic all season. Left-back, left wing-back, centre-half. Yes, he had some moments when his form dipped, but in general he’s been consistent and committed. B+.

Kieran Gibbs: Sidelined for much of the season, only brought back in when we needed a left-sided player in the back three. With Sead Kolasinac on the way this summer, I think he’ll be allowed leave. D.

Aaron Ramsey: A mixed bag again. When he maintained his fitness, we saw the kind of player we all want him to be, but fitness issues plagued him for most of the season. Still, scored the winner in a cup final again. Sneaks a B-

Granit Xhaka: I liked him. The disciplinary thing was overcooked and hung around his neck like a millstone. Maybe it took him time to settle, but he’s a wonderful passer of the ball, and improves our midfield. B+

Francis Coquelin: As the season has progressed it’s become clear his best role is ‘useful squad member’ rather than someone who starts every game. And every squad needs those kind of players. C.

Santi Cazorla: Poor Santi, his Achilles heel is literally his Achilles heel. It’s very hard not to worry if we’ll ever seen him right again. D (for the impact of the injury rather than his performances when he was fit).

Alex Oxlade-Chamberlain: It’s a been a season of improvement, with more goals and assists that any other campaign, and he looks to have matured as a player. His best role remains an issue, he says he wants to play centrally, the manager says that’s where he’ll end up, yet still plays him wide. B.

Mesut Ozil: In pure numbers 14 goals and 13 assists is a great contribution. However, the illness/loss of form etc was so profound it’s impossible to ignore. Like others was energised by the move to a back three. B-

Mohamed Elneny: The Egyptian found himself very much on the fringes this season, making just 12 starts. He’s honest and hard-working, but there’s clearly something about him that leaves his manager cold. D.

Alexis Sanchez: 30 goals (watch them all here) and 14 assists, a massive contribution. His season might have been peppered with moments of personal indiscipline, but if that’s the trade-off for a player who can do what he does, so be it. Arsenal must move heaven and earth to keep him. A

Theo Walcott: If Arsenal had signed a winger last season who got 19 goals we’d be over the moon. Instead ten years of Theo mean there’s not as much excitement about what he did. While others have benefitted from the new formation, he has been left looking on from the bench. Could/should be sold this summer. B-.

Olivier Giroud: He might not like it too much, but he’s a player who can still contribute but one who should no longer be a regular starter. His impact from the bench is fantastic, scored one of the goals of the season. C+.

Danny Welbeck: His power, pace, physicality and mobility are all the things you want from a centre-forward in this formation. His inability to add the goals is a worry. Still troubled by injury a bit, so maybe that’s an issue. C.

Alex Iwobi: He was a big part of why we played so well in the opening third of the season, but suffered a loss of form and the confidence of his manager. Still an exciting prospect, but needs to get his head down and work hard, C-.

Lucas Perez: What we saw of him looked good, but clearly it wasn’t enough for the manager. I felt sorry for him, and feel he could have been used more, but it’s hard to look beyond a summer departure. C.

It seems apparent that with the players we have, the three at the back formation is the way to go from now on. Perhaps that will change based on who we bring in during the summer, and who leaves, but it’s helped solidify us defensively, made the midfield functional and, as we got used to it, re-energised us as an attacking force.

Whether you view it as a tactical brainwave or a move borne out of sheer desperation doesn’t really matter at this point, so it’ll be interesting to see if we continue it next season.

What we need to see now from the club is clarity over the manager’s role – and Arsene Wenger met with Stan Kroenke yesterday ahead of the board meeting today. An announcement is expected tomorrow at the latest, with the odds strongly stacked on the Frenchman signing a two year deal.

After that, the futures of Alexis, Ozil and others must be sorted out as a matter of urgency, before we dip into the transfer market – and again that has to be done efficiently to ensure as ready as we can be for the opening day of next season. None of this dithering around in late August nonsense that has proved so costly.

Anyway, that’s all to come in the days ahead. Let’s see what that brings us and we can react to it then. For now, I’ll leave you with yesterday’s Arsecast Extra which looks back on that wonderful win at Wembley, winning the cup, what it means, the slightly squiffy voicemail I left for James, and lots more. Happy listening!