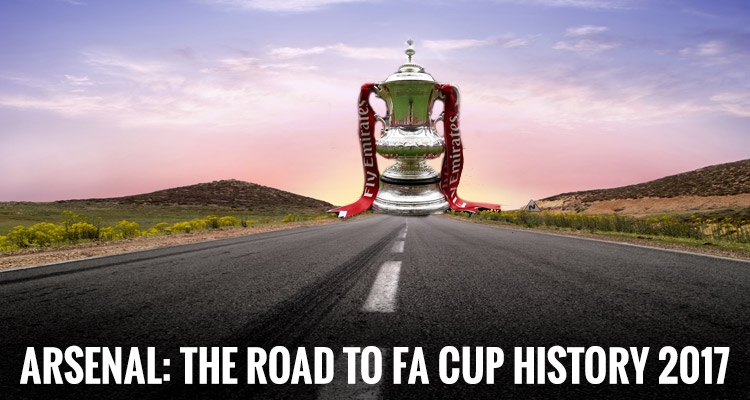 Arsenal, having defeated Chelsea 2-1 last Saturday, now hold the record for the most FA Cup wins of all time. Seven of those thirteen victories have come under Arsene Wenger who has won the prestigious old trophy more than any other manager in history.

Now that we’ve reached the final destination, it’s easy to forget that this was a journey that wasn’t always easy, so let’s take a look back at how we made it happen.

A third round tie against lower league opposition is just the thing you want to kick off an FA Cup campaign. Preston were doing well in the Championship at the time, so they weren’t exactly minnows, and our previous game had been that 3-3 draw at Bournemouth.

At the Vitality Stadium we were guilty of a slow start (which lasted about 70 minutes), and that sluggishness was evident again at Deepdale as the home side took advantage of some horrible defending to go ahead in the 7th minute. They might have scored more but only took the one goal lead into the break.

From the Arseblog the next day:

I suppose someone who writes for a living and writes about football every day of his life should have the words to describe how bad we were, but I’m struggling this morning. It was awful, abject, appalling, abysmal and abhorrent. Wait until I get to the letter B in my thesaurus.

Starting games that slowly is, I think you’d all agree, a bad thing. It would be great if the manager could have a quick word with the chaps beforehand and say, ‘Here’s an idea, let’s not play like disinterested twats for the first 45 minutes’, I think that might have a positive effect.

We dominated the rest of the game but struggled to find a way through. That was until Olivier Giroud got on the end of a clever Lucas Perez pass and bundled the ball over the line in the 89th minute. A whole 60 seconds earlier than his equaliser at Bournemouth the previous Tuesday, but this time there was no Scorpion celebration.

Just bearded awareness that he’d won the game for the Gunners, and sent us through to the next round.

St Mary’s had been a difficult ground for us up until this season, and there were some worries when Arsene Wenger rotated his squad in a big way for this game. A midfield trio of Alex Oxlade-Chamberlain, Ainsley Maitland-Niles and Jeff Reine-Adelaide was a long way from our first choice, but on the night Arsenal were superb.

I knew that he worked very hard, but you never know how much efficiency there will be… to transfer that into a competitive game. I think it was great to see that he hasn’t lost his runs, he hasn’t lost his finishing. It shows as well, when you are able to transform that frustration of not playing into efficiency, that’s a special guy.

It meant that having lost two league games in one December week to Everton and Man City, results which many point to as ones which derailed our season, we’d had six wins and a draw from our next seven games and we looked in good shape to take on Watford at home in our next fixture.

The fixture gods were smiling on us with a draw against a non-league side. Perhaps the most memorable thing about this game, beyond having to play on an artificial pitch, was Sutton United’s back-up goalkeeper munching on a pie and subsequently losing his job because it turns out he’d arranged it with the betting arm of The Sun. It was daft and while hardly the most egregious offence, if you lie down with dogs chances are you’ll get fleas.

Lucas Perez opened the scoring, his 7th goal from 9 starts, but it wasn’t plain sailing. Not helped by the moment David Ospina passed to one of their players giving him a great chance to equalise, but he was so shocked at the ineptitude of the Arsenal keeper he simply shot wide.

Theo Walcott doubled the lead in the second half, while former Arsenal youth player Roarie Deacon was the stand-out performer for Sutton. The best moment of the game came in the second period though, when a Sutton defender tried to headbutt Alex Oxlade-Chamberlain as he ran past him:

Oh my God he's tried to headbutt him, this is truly the magic of the cup in action. pic.twitter.com/3f21Zv7Hqm

Non-league meets Sunday league meets crap Justice League. Afterwards, the newspapers were full of stories about how Arsenal had left the away dressing room (which was the size of a closet) in a mess, but didn’t give a lot of coverage to the fact the club had donated £50,000 to Sutton to be invested in community and educational projects.

The Sutton chairman wasn’t so reluctant to come forward on that, however, and it added a bit of gloss to what was a pretty ordinary game.

When Arsenal met Lincoln City, there was genuine relief that we were playing a non-league side. In the space of five weeks we’d lost to Watford, Chelsea, and Liverpool in the Premier League, as well as suffering two 5-1 defeats to Bayern Munich – the second of which occurred just four days before the quarter-final. The mid-season slump was well and truly underway, and the mood around the club was grim, to say the least.

It explained the strong team selection, with Arsene Wenger not risking any further humiliation:

I didn’t want to gamble today because I knew that it was very important to win the game and I felt as well that the team had performed well against Bayern and I wanted to give them a chance to find their confidence back by winning the next game.

The lack of confidence was evident in the first half, and it was only right towards the end of the first period that we found a way through via Theo Walcott. The second was much more comfortable though, with goals from Olivier Giroud, Alexis Sanchez, Aaron Ramsey and an OG giving us the win.

You expect a side like Arsenal to beat a non-league team, so there was nothing particularly special about it. Other than how upset it seemed to make Chris Sutton, co-commentating on BT Sports. Like the bit when Mesut Ozil shouldered a Lincoln player out of the way. For some reason he didn’t like this despite having talked up the visitors physicality all day:

Or the bit where he thought Lucas Perez had dived (he hadn’t, he’d been fouled):

It made it all the sweeter, and as I said in the Arseblog report the day after:

For two rounds in succession we’ve delivered a knock-out blow to Sutton.

As did Ian Wright!

"You can't get into that party, Bruv." @IanWright0 you absolute god. Sutton is OWNED. ? pic.twitter.com/V305G0CycA

And despite being under the most intense pressure of his Arsenal career, Arsene Wenger still found time for Lincoln boss Danny Cowley and his brother after the game:

We had about an hour and a half with Arsene Wenger after the game and that will be invaluable, something we will cherish forever. The fact that he was willing to give us an hour, an hour and a half of his time after probably the week he’s had says everything about that man.

I asked lots of questions. After an hour and a half I’m sure they’d had enough. It was really insightful, a fantastic experience.

The win meant it was one of Sp*rs, Chelsea or Man City in the semi-final, and given the way we were playing Guardiola probably had some pep in his step after the draw had been made.

Our slump reached it’s nadir at Selhurst Park as fans told the players they weren’t fit to wear the shirt as they watched Arsenal capitulate 3-0 to Sam Allardyce’s side. It prompted Alex Oxlade-Chamberlain into a very public apology, and Arsene Wenger into an almost unprecedented tactical shift, moving to a back three for the first time in over twenty years.

It brought about a win at Boro the Monday before the semi but it was a long way from convincing. And a defensive trio of Gabriel, Laurent Koscielny, and Rob Holding (playing only his second game in two months) didn’t look like our most assured combination of centre-halves.

Oxlade-Chamberlain was deployed as a wing-back and, after City had a good goal disallowed in the first period, it looked like we might struggle when Sergio Aguero put them ahead midway through the second half with a goal that summed up so much of our defensive weaknesses over the course of the season.

A team which hadn’t shown much mettle during a dismal period dug deep though, and a brilliant cross from Oxlade-Chamberlain was matched by a brilliant run and finish from Nacho Monreal to equalise ten minutes later.

Danny Welbeck came on to cause some chaos, and the game went into extra-time. Arsenal looked more dangerous, and when Welbeck failed to connect with a loose ball after a corner, Alexis Sanchez was there to score a 101st minute winner.

We rode our luck a little in the final stages, City had chances, but a third final in four years was reward for a team which really had to work hard to get the victory.

It was a big test for us today – it was a mental test because many people questioned ‘Can we turn up in an occasion like that?’

That’s why I am very proud for the players, because they showed they are united and determined.

Although the 2-0 Premier League defeat at White Hart Lane a week later sucked some of the good feeling away, the move to the back three saw Arsenal win 9 of their last 10 games, and this performance in particular seemed to instil some belief back into a beleaguered team.

In the other semi-final, Chelsea trounced Sp*rs, and it meant we’d be facing the champions, out to do the double, in the final.

This one remains fresh of course, but it’s one that will live long in the memory. A titanic performance from Per Mertesacker;  Rob Holding telling Diego Costa that he was a nutter; a controversial opening goal from Alexis; a briefly dismaying equaliser; and then that immediate Aaron Ramsey winner, there was so much to love about the day itself.

It meant Arsenal set a new FA Cup record, as the club who have won it more than any other (13), and Arsene Wenger as the manager with the most wins (7).

Ultimately, the league season was disappointing and we missed out on the top four for the first time in twenty years. Yet there are very few fans, whether they were at Wembley or not, who would take a top four finish over winning an actual trophy.

We’ve lost just one game in the FA Cup in four years, it’s a remarkable record, and also one to be proud of as other teams wax lyrical about a season in which they didn’t win a thing bar some meaningless plaudits.

It wasn’t an easy journey, one we made hard for ourselves at times, but in the end the cup is ours once again.

And just in case anyone hasn’t heard, we won the cup.