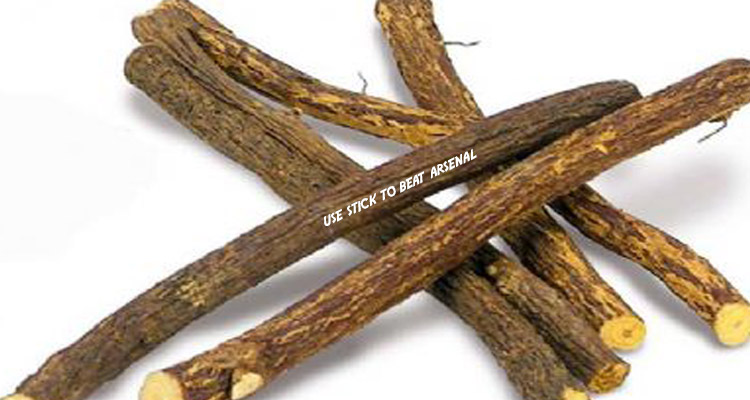 Predictably Leicester City’s qualification for the quarter-finals of the Champions League has sparked plenty of Internet reaction as it’s being held up to Arsenal’s seventh successive exit at the Round of 16.

‘The 17 funniest Tweets about Leicester and Arsenal’ run the headlines from the clickbait merchants who should be done under the trade descriptions act because of none of them are funny. Anyway, a couple of things to say about it.

1 – Not every single thing has to be a stick to beat us with. We’ve got enough sticks already. I mean, look around, there are sticks to the left, sticks to the right, and if you take a quick look over there beyond the massive pile of spare sticks, there’s a warehouse almost full of sticks. I say almost because there’s a fresh delivery of sticks arriving any day now, probably after Xhaka is sent off against West Brom and Tony Pulis celebrates a 1-0 win thanks to an Aaron Ramsey own goal.

2 – Leicester weren’t playing Bayern Munich. Ok, Sevilla are a good side, no doubt about it, but they’re not Bayern good. They also had 11 men all the time, which is pretty handy. Sevilla also have the perpetually spineless Samir Nasri in their team.

3 – Leicester are 15th in the Premier League. If they’re being lauded for a two-legged cup tie, there ought to be some focus on the plucky little Champions for that.

4 – Who gives a shit what Leicester do? We literally don’t need to do anything to make what we did against Bayern worse. It was abysmal enough on its own merits. This goes back to point 1 and the sticks thing. What we did in our Round of 16 tie was embarrassing.

It’s the footballing the equivalent of being 12 in school, putting your hand up in class and calling the teacher ‘mum’. The fact that weird Jamie down the back stuck a bit of paper to your back saying ‘kick me’ doesn’t make it worse. It’s bad enough as it is.

Anyway, I’d love to see Leicester get Barcelona. Morgan, Huth and Drinky v Suarez, Messi, Neymar and the UEFA officials. What a match-up.

Elsewhere, an interesting story emerged yesterday regarding Boro Primorac. For those who are unaware, he’s basically Arsene Wenger’s right-hand man. A confidant, a sounding-board, part of the coaching staff, and someone who has been at the club for the duration of the manager’s time here.

Yesterday, there were reports that he’s set to take over as manager of a Turkish club this summer, although it would be fair to say those reports are not exactly detailed. It’s all a bit vague, and I have to say I’m dubious as to the extent of their veracity.

However, if there is any truth to them, it might give some indication of what might happen this summer. It could well be seen as an indicator of Wenger’s intentions. When the kids had killed the man I had to break up the band, and all that. Would Boro part ways with a man he’s worked with for so long if there wasn’t something else going on?

It might also feed into the stories that have been doing the rounds about how Arsenal are looking for a sporting director. Now, while I think everyone can see how that is a role that needs to be filled as we look to future proof the club, and make it ready for the day when Arsene Wenger is no longer the manager, it’s hard not to be cynical about the timing of it.

It could well be a case that they’ve realised if they want – at some stage – to hire one of the new generation of head coaches, they’re going to have to put in place the structures to help support that man. Those guys don’t want to do everything Wenger does, they don’t want that level of boardroom, contractual and managerial responsibility.

They’re generally happy to work under a system where, for example, with their input – “I need a left-back and a striker” – the club buys the players and the manager/coach works with them. Right now, we don’t have those people in place, far from it, so if they are making moves to to address that, then we should be happy about it.

The other side of that, however, is that this could be a story leaked via friendly sources to try and dampen down disquiet, and perhaps to make an extension for the current manager seem more palatable to those who want a change. It would not be the first time that such a thing has happened. It became almost comical as title challenges imploded year after year how that precipitated stories about summer transfer war-chests, so the proof of this particular pudding will be in the eating. Or the hiring.

What we do know, for sure, is that this is a system which Arsene Wenger does not work under, has never worked under, and probably has no intention of working under now. I can’t imagine a Sporting Director being allowed to make the final decision on transfers in or out, for example, so unless we’re bringing in somebody with little or no experience – but perhaps an Arsenal connection – who can learn the job in a transitional period after Wenger extends further then I can’t see how this makes a lot of sense at the moment. Thus the more cynical view of the story becomes the most likely.

Finally for today, some very interesting reading about how Bournemouth, Arsenal and new techniques, have worked to keep Jack Wilshere fit for most of this season. The medical teams at both clubs have been in close contact throughout, and Jack’s recent absence from the team has been part of how his fitness is being managed. Check it out here.

Right, that’s that. News throughout the day on Arseblog News, more from me tomorrow.