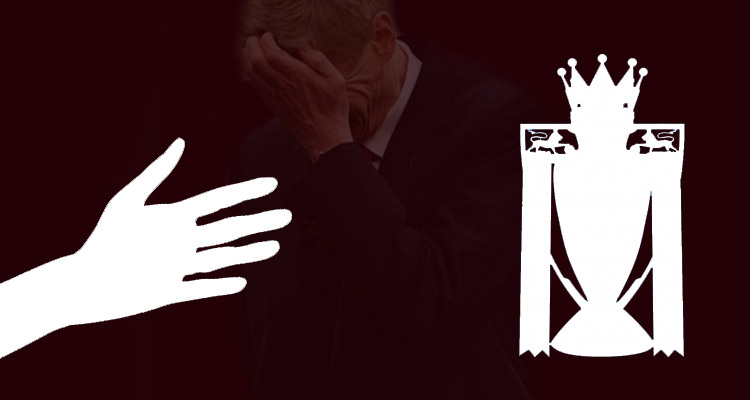 Good morning. We’ll touch on FA Cup stuff a bit later on, but to start with this morning I wanted to address the issue of title challenges.

Obviously things are a bit tense and tetchy at the moment, and one of the things I’ve seen people talking about a lot is how long it’s been since we challenged properly for the title. Now, I suppose there are different outlooks on what constitutes a genuine title challenge but I guess a general rule would be being within touching distance of the top of the table with just a few games of the season to go.

Whether that’s being out in front – not something we’ve done very much at all – or just a single win away from closing the gap, it’s hard to say exactly, but being in the mix until May, until those last couple of games would, in my opinion, be an indicator of a team that has mounted a title challenge, albeit one which is ultimately unsuccessful.

So, what I did was I went back over every season since we last won the league in 2004, and looked at our league position at the start of February, March, April, May, and then the final league table and position. I also noted how far we were ahead or behind of the league leaders at each of those points. It’s been quite interesting actually.

I guess the first thing that struck me was how certain seasons were genuinely really, really bad. 2005-06, for example, was abysmal by previous standards and even in comparison to today. However, we did reach the Champions League final that year and the Invincible season was still fresh in the memory so it was viewed with a bit more leniency and perhaps seen as something of an aberration. 2006-07 was similar, but that was followed by what I think was our best chance of winning the league in recent (ish) years.

That was a traumatic final few months though as we had the horrible Eduardo injury and that game against Birmingham; the Gallas strop; and injuries to Sagna and Flamini which proved damaging as well. That 2-2 at St Andrew’s was the first of four consecutive league draws which saw our lead whittled away, and then we got Drogba-ed at Stamford Bridge, and a couple of games later lost at Old Trafford and that was that.

2009-10 was promising too, just three points off the top at the start of April, but a sequence of three defeats and a draw put paid to that, and one of them was a loss at White Hart Lane too. 2013-14 was when we led the pack in the first half of the season and fell away in the second; while the following season we had dismal first half and rocked it in the second but we were never able to make up the gap.

Last season was about putting those two halves together over the course of the campaign and while we were top of the table at the turn of the year we all know how we let it slip and Leicester’s amazing run saw them crowned champions. I think we were there or thereabouts for a good chunk of that season, but the consecutive losses to Man Utd and Swansea meant that barring a collapse from elsewhere, we were pretty much out of the title race itself by the start of March.

The thing that stands out most for me, however, is that in the 12 seasons since we last won the title, only twice have we been top of the table at the start of a month (and I understand this doesn’t take into account mid-month league positions) and that was in 2007-08 when we led the pack in February and March. Not once have we been setting the pace at the start of April or May.

More often that not any hopes we have of winning the league are gone at that point, or require those leading the way to stumble considerably – and even that would then require us to pretty much flawless to take advantage of that. In other words, the conclusion I think we can draw is that Arsenal challenge consistently for the top four, and have often finished higher than that trophy-tastic position, but have rarely challenged properly for the title itself.

And while I’m as hungry as anyone to see us lift the Premier League again, I’ve long said that if we had teams who could at least maintain a challenge right to the death, you can doff your cap to the team which has been that bit better and at least feel like we gave it a good go. So, the frustration felt isn’t simply because we don’t win the league, it’s because we very rarely compete for it in a real sense.

Anyway, the tables are below for you to peruse at your own leisure (E&OE).

So, to the FA Cup and we’ll face Manchester City in the semi-finals after the draw was made last night. Chelsea beat Manchester United 1-0 at Stamford Bridge. It wasn’t a great game but isn’t it funny how Jose Mourinho, who has spent an absolute fortune on what was already one of the most expensively assembled squads in the world, doesn’t get asked more often why his team play like they’re managed by Sam Allardyce trying to battle relegation. Even with 11 v 11 their main tactic was kick the crap out of Eden Hazard, one that backfired – and how I’d love to see more referees deal with rotational fouling the way Michael Oliver did last night.

Anyway, that means Chelsea v Sp*rs in the other game, and that suits us I think. Right now I feel like we’ve got a better chance of beating City because of how they play, but hopefully by the time that game comes around we’ll have some a bit more form and rhythm. It also means two games in three weeks against Guardiola’s side, can we win them both?

Finally, if you haven’t had a chance to listen to yesterday’s Arsecast Extra, there’s some insight into the the signing and treatment of Lucas Perez, a look at Lincoln, bad pundits, protests, planes and bar snacks. All the stuff you need, listen below, and there’s more from me tomorrow. Until then.