Kylian Mbappe could be the new Charlie Nicholas + streaming woes ahead

More Champions League misery for a Premier League team this week as Man City, leading 5-3 from the first leg, crashed out after they lost 3-1 to Monaco in Monaco in the Monaco Stadium of Monaco.

Apparently Gilles Grimandi, our chief French scout in France, was at the game. We have an exclusive picture of a deal he tried to do last night. It might have been scrawled on a napkin but still … 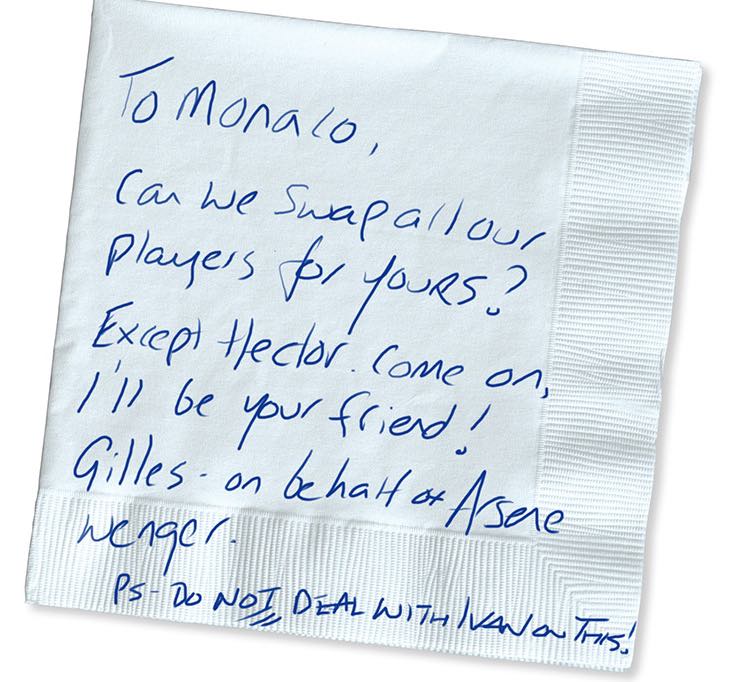 Tell you what though, that Kylian Mbappe lad, blimey. He looks good. I think we’re approaching Charlie Nicholas territory with him. By that I mean when Charlie was still at Celtic and we were rumoured to be interested in him along with Liverpool, Manchester United and others, I can remember staying awake saying prayers to Dennis Bergkamp that we would be the team he chose.

He’d scored about 700 goals in his last season in Scotland, and I think it’s also fair to say that in 1983 we weren’t necessarily at our most attractive, but I said my prayers and then he signed. I’m a bit older and more cynical now, and I don’t think that would work, but if you have a young son who is a big Arsenal fan, you should place that burden on their shoulders.

Make them pray that he joins and if he does, they’ll feel amazing. If he doesn’t you can a) blame him for not praying hard enough or b) God for being cruel and not paying attention. Either way, it could have a profound effect on their life.

I suspect this lad is going to have to pick of the top European clubs this year if he does decide to leave Monaco of Monaco. Arsene Wenger has already confirmed he made an approach last summer, but we don’t know if that failed because it was too soon, or the offer wasn’t good enough. I also reckon that Wenger probably knew this campaign was going to be one where he would make something of a breakthrough and wanted to get in before everyone else did.

And when he talks about him possessing the similar qualities to Thierry Henry you can really see it. This isn’t just a ‘X is the new Y’ kinda of scenario, the way he moves, that drop of the shoulder, pffff, it’s uncanny at times.

Anyway, my firm belief is that we should become absolutely fixated on him as the answer to all of our problems. A sort of striking Yann M’Vila (why does he not have a chant to the tune of this, by the way?). Probably because he’s a bit rubbish and that’s a great song and you can’t waste a great song on a middling player, they have to earn the song dammit.

So Arsenal are out of Europe, Man City are out of Europe, and Sp*rs, who never miss a chance to fail harder than anyone else, have been knocked out of Europe twice – and once at the hands of a team with a name that sounds like a drunk South African with a cold calling you a rude name.

So, what else is happening? To be honest, not very much. Thankfully the win over Lincoln hasn’t been milked to within an inch of its life, and you assume that the hard work is going on on the training ground to prepare us for what is a difficult game this weekend against West Brom.

Its importance goes without saying, but the fact that we then go into an Interlull and then face Man City immediately afterwards means that we’ve got to try and carry some momentum into the break. I wouldn’t go so far as to say Tony Pulis has made West Brom formidable, but he’s certainly got them well organised, tough to break down, and you can be sure that he knows how to set up his team to play in a way that will frustrate Arsenal. More on that game over the coming days.

A couple of quick things to finish. For those of you, and there are many, who rely on streaming sites, and Kodi in particular, to watch Arsenal and other live football, this makes for interesting reading. It’s understandable why the Premier League would act in such a way, they’re protecting their massively valuable asset, but more and more it feels like it used to with music –a legacy product desperately fighting against inevitable and relentless change.

I think they think if they make it difficult for people they’ll win, but ultimately the demand will be there. People want to see their team, simple as that, and restrictive practices will just lead to greater ingenuity. I’d happily pay for a good quality streaming service, and already in the US, NBC’s TV deal with the Premier League means that you can watch any/every game, each weekend. Back this side of the Atlantic, we get what we’re given and that’s that. That’s why people use streams, because they want what they want, not what Sky and BT decide to put on.

Ultimately, it’s the cash that calls the shots. The Premier League’s reliance on the billions it gets from the broadcasters means they have, in some ways, painted themselves into a corner with a 14′ cathode ray tube TV, while the rest of us are getting ready for Minority Report HD screens that we can watch anywhere, or via microchips in our brains or something.

Finally, something I wrote on my personal site about content, the business model of giving it away for free, and how subscription/donation is probably going to be the way forward for many small/niche publishers. It’s more me thinking out loud than planning on going down that road just yet, but unlike the Premier League we can’t stick our head in the sand and hope everything will be ok. Read it here.

Right, have a good one, Tim Stillman will be here later with his column, and I’ll be back tomorrow with an Arsecast. Until then.

Previous articleSticky sticks + are Arsenal really looking for a Sporting Director?
Next articleUpgrading the Software