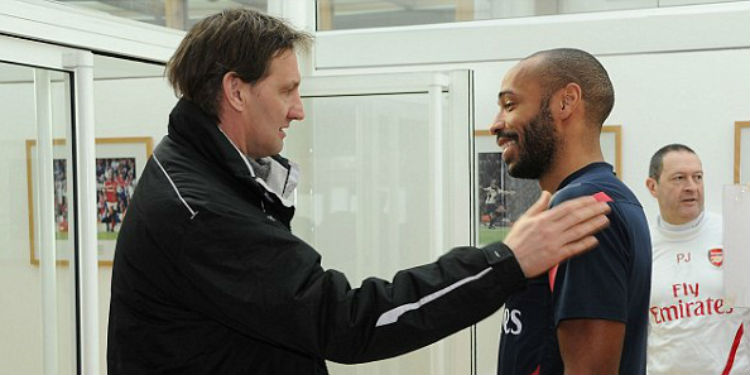 I was really hoping a tasty new Arsenal-related story might break overnight. The prospect of once again delving into the nuances of the Henry-Wenger ‘bust-up’ doesn’t much tickle my fancy.

There were the buds of a ridiculously spurious Giroud-Higuain swap deal story yesterday morning. And even some quotes from the Frenchman’s agent. But to believe such an arrangement could ever bear fruit would require a volatile cocktail of illicit substances. The closest I have to hand is a pint of semi-skimmed milk that has been turning green in my fridge for a month. I’m tempted, but not that tempted.

Don’t get me wrong, I’m all for us signing the Argentine – ‘confirmation’ of his 2014 move to Arsenal taunts me from the Arseblog News draft folder every day – I’d just rather not get rid of our Handsome French Bloke. You might not like him, but I do. Perhaps we can give Napoli some magic beans and a firm handshake instead? It feels like the type of thing Herbert Chapman would have got away with.

Erm…what else is there? I see our young Spanglish midfielder, Jon Toral, completed a loan move to Grenada. With all due respect to the lad, I’m not sure he’d want me waffling on about it for another 500 words. I’m sure he’ll have a great time though; swapping Birmingham for Andalusia and the Championship for La Liga would be fine by me.

Elsewhere, The Independent tried to panic Arsenal fans by claiming Chuba Akpom will be our only fit striker for the opening game of the season. Obviously, that’s nonsense. You can insert your own Sanogo gag here.

Right, I’ve put it off long enough. I guess we should finally touch on Henry’s latest Arsenal departure, which he confirmed via social media yesterday afternoon.

He explained: “I would like to thank Andries Jonker for offering me the chance to coach the U18’s at Arsenal, which I was honoured to accept. However, I respect Arsène Wenger’s decision and I want to wish their manager Kwame Ampadu, the boys and everyone at the club all the best for the forthcoming season.”

The tone is a little passive aggressive, but what’s important is that it draws a clear line under the matter. As I wrote in yesterday’s blog, I firmly believe the boss has taken his stance on Thierry’s media duties with a view to protecting squad stability at London Colney. I don’t for one moment buy the ‘ageing autocrat paranoid about young pretender’ line that’s been lazily peddled in some quarters of the media. As for Thierry, would you rip up a £4 million a year contract at this point in your career? I know I wouldn’t.

Having worked with each other for over 20 years I’ve no doubt Arsene’s relationship with Henry will remain intact. Likewise Henry’s relationship with Arsenal. Whatever your take on this situation, and clearly it’s been quite divisive, there are bigger things for the club to be focusing on than who’ll be taking charge of the under-18s next season.

That said it’s great news to hear that Tony Adams is ready to fill the void. According to The Telegraph he’s three weeks into a five-week probationary period and looks likely to get a full-time position alongside Kwame Ampadu. So one legend cast in bronze departs. Another legend cast in bronze arrives.

Talking of lavish handovers…today’s my last holding the fort. Normal service will resume tomorrow when a tanned and well-rested Blogs returns from his holiday. It’s been fun, thanks for having me.

I’ll catch you on Arseblog News.