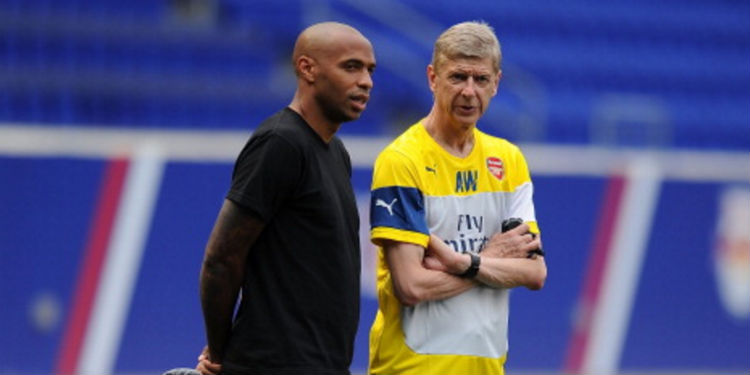 Good morning from a sunny Brixton…

The big talking point this morning is that Justin Bieber has been photographed wearing an Arsenal shirt Arsene Wenger has asked Thierry Henry to quit his role at Sky Sports if he wants to retain a role on Arsenal’s coaching staff.

Earlier in the summer it was rumoured that Henry would be offered a formal position with the club’s under-18s having been embedded with them at London Colney while he earned his UEFA A Licence. It’s now suggested that the offer came with strings attached and Thierry doesn’t much like them.

The Daily Mail suggests a decision is yet to be made by Henry, but stresses he’s unhappy with the ultimatum from Wenger. Their report pointedly references the boss’ own TV commitments. The Telegraph goes further, saying Henry won’t sack off Sky but has offered to coach at Arsenal for free; a proposal that Wenger has rejected.

There are suggestions that Tony Adams may have got the under-18s gig instead.

First, I think it’s obvious that Henry’s dedication to coaching isn’t in question, as Academy head Andries Jonker made clear back in October.

“Thierry’s own wish is to be at Arsenal five, six, seven days a week. It’s his own ambition to invest in his own future as a coach. What I am recognising is a guy who had a brilliant career as a player that is able to transfer his knowledge and experience to the boys. And the most important thing is he is willing to do it.”

So what is going on? Personally, I think Wenger is laying down the law having been riled by Henry’s pointed criticism of his squad last season. First, there were the comments about Olivier Giroud – words that stung our often-maligned attacker – and then his remarks about the atmosphere at the Emirates.

You’ll remember the boss delivered a stinging retort when challenged by the media about the latter. “Thierry Henry has his opinions,” said Wenger in March. “He has not found the measurement of the fans angriness, of 60,000 people, straight away because he sits in the best seats in the stadium.”

Initially, it felt like Henry was relatively conservative in his pre and post-game views. He played the Gallic cool cat well, as always, but he wasn’t exactly generating headlines worthy of his £4 million a year pay packet. Someone obviously had a word in his ear and told him to be more assertive. A flick was switched and while he hardly went for the jugular of anyone at Arsenal, he clearly recognised he couldn’t be a wallflower in a world where the media happily puts rent-a-gobs on a pedestal.

It all got a bit awkward last season. And awkwardness isn’t something you want permeating the training ground. It doesn’t take much to knock the confidence of a couple of individuals and for that unease to damage team spirit as a whole. I’m not saying our players can’t handle having the finger pointed at them, but in a world where millions are spent on incremental gains, it would be churlish not to take the above into account.

The wider issue is our apparent inability (or maybe it’s unwillingness) to make room on our coaching roster for former players. Plenty have been given the chance to undertake their badges – including a whole host of the ‘Invincibles’ – but aside from Steve Bould there are few high profile ex-Gunners working the daily grind at London Colney. Mikel Arteta’s recent move to Manchester City further highlights the situation.

Should we be worried? If you’re looking for signs that the club has a clear succession plan in place for Wenger’s departure, then yes maybe. It certainly worries me. Anyway, I’m sure there’ll be more on this in the coming days, particularly if Henry’s exit is made formal.

Elsewhere we got confirmation that Isaac Hayden has signed a five-year deal at Newcastle United. Good luck to him, given our midfield options it’s not hugely surprising he’s taken the decision to work with Rafa Benitez. Finally, Aaron Ramsey has been included in UEFA’s team of the tournament for EURO 2016.

Right, that’s your lot. If anything happens today we’ll keep you updated on Arseblog News.

Oh, I forgot to mention yesterday that Blogs kindly provided proof that he’s NOT sporting budgie smugglers in Spain.