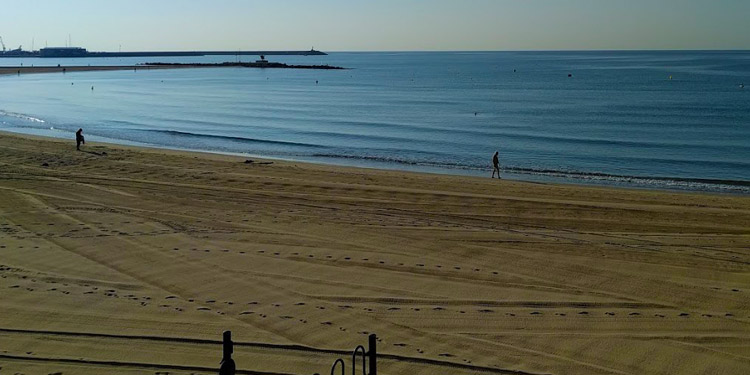 Well, here I am again – at my desk in Dublin. Which is not, as my feet are first to know, Spain. Because my feet feel cold and they have not felt cold since last Wednesday.

You know, I have spoken many times about how Arseblog is a part of my routine. Get up, make coffee, blog about Arsenal. It’s second nature having done it so long. That’s not to say that this pattern couldn’t be changed or improved in some way. For example, I have rediscovered that throwing ones self into the Mediterranean first thing in the morning – sometimes after a run even – is a jolly pleasant way to start your day.

Hangover, what hangover? And there is, of course, the fact that you’re in the sea which is one of the best things on earth. Ever wondered why most of this planet is covered in ocean? It’s because oceans are ace and really good at being a thing you can throw yourself into first thing in the morning.

Am I rested? Yes, bar the fact I got back to my house – which is not in Spain on the beach, by the way. An issue which causes me some genuine dismay – at 3am this morning. That means that right now I don’t feel particularly rested, but in mental terms it was much needed break from the relentlessness of football and Arsenal and getting angry at things that haven’t happened or haven’t happened yet.

I experienced no drama, no fuss, no discussion or debate, and I can categorically state that this is an excellent place for your mind to be in. As much as we’re all invested in the fortunes of this great club, I cannot recommend highly enough switching off, leaving ‘social’ media to one side (in a cage, locked with titanium padlocks and with a heavy curtain thrown over it), and just not worrying about stuff you can’t do anything about anyway. You don’t even need to go on holidays to do that.

I kept a fairly cursory eye on things from over there, reading Arseblog was my window into the world and from afar it seems as if little of any consequence has happened. Pre-season has begun and we don’t have that new striker we all know we need. The first game is a little way away still, and perhaps now that the Euros are over things will start moving, but the Euros being over doesn’t necessarily mean there will now be a glut of suitable and available candidates for us to purchase (or not).

There are certainly things to be a little bit worried about, what with Olivier Giroud getting extended holidays after the disappointment of the final which could take time to get over. Not to mention Alexis’ ankle looking the way it does. A quick look at stuff this morning shows stories suggesting he could miss the start of the season too, leaving us with the unconvincing option of Theo Walcott as the man to get the goals in the early part of the season.

And yet there’s still time to do things. There’s still time to spend some money. On who, when, and how, all questions I have no answers for, but it’s not as if the first game of the season is this weekend. The clock is most assuredly ticking however, and one would like to think that our brave, confident, self-assured and completely and utterly loaded trio of Arsene, Dick and Ivan – Ardivan as I like to call them – have got some shit going on.

Maybe that’s still my holiday romanticism talking, but I’d be very surprised if we didn’t do more in this transfer window. As I said before the break, I’ll happily provide the pitchforks if not, but for now I’m in wait and see mode – although I am squinting suspiciously as this does seem somewhat familiar.

What else happened? Portugal won the Euros. I voiced my fear about this on the Arsecast Extra and so it came to pass. I watched the 90 minutes in a cocktail bar and truly hoped that we wouldn’t have to endure extra-time, so when that happened I knew who’d win and I didn’t bother watching the rest and went for dinner instead. It was a very nice dinner, prepared well by chefs who seemed to know what they were doing. I ate the dinner and the dinner was good. The football, not so much.

Still, 2016 does it again. Portugal winning the Euros despite finishing third in their group, after Leicester won the Premier League and all the other stuff that’s happened. I think history will – if there’s any history to find as we career down the road to the destruction of this world we live in and everything we thought we knew – look back on 2016 as the year when it all started to go wrong.

I noted some outrage and drama over the whole Thierry Henry thing. I suppose it was a difficult choice for him to make. As a multi-multi millionaire it must have been tough to decide whether or not to earn some more millions from Rupert Murdoch, or dedicate yourself to a coaching career at the club you love so much. He chose the cash, and good luck to him because there’s very little I wouldn’t do for £4m a year.

Was Arsenal’s position unreasonable? I don’t think so really. If you want to be a manager/coach and be the best at that, then I think you need to be doing it full-time without any conflict of interest, which ultimately a punditry job is – regardless of who it is. There aren’t many out there who combine coaching and high-profile TV gigs, and there’s a good reason for that.

Still, Thierry says he respects the manager’s position and amidst all the complaints about us not giving jobs to old players, it’s a bit of a shame one of the best old players ever has chosen not to work with us. It’s natural for employers to set the terms and conditions of that employment, in this case they didn’t suit him. And life goes on.

Finally, just a word of thanks to Tom and in particular Andrew Allen for holding the fort in my absence. There’s a bit of housekeeping and what have to do over the next few days, but I hope you’re all well. Is it good to be back? Ha, and indeed, Ha! Are my feet in the sea right now? No, they are not, which is profoundly disappointing, but the normal rhythm of life will return soon enough.

At some point in the future my feet, and the rest of me, will be in the ocean again and that’s the main thing. It’s good to have goals in life. Not just from a man who costs £60m+ and is bought by us to make us feel good about our football team before a new season.