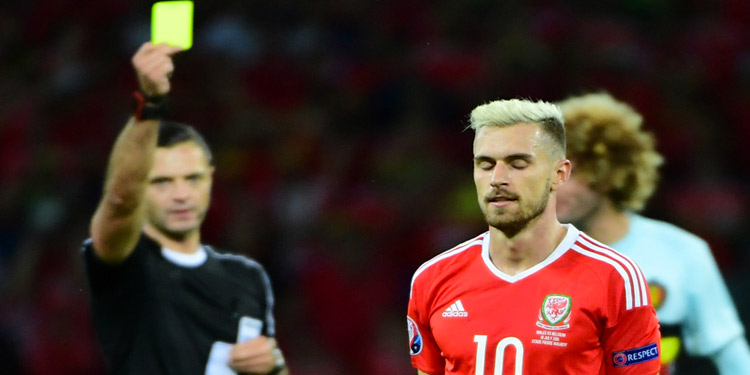 There’s Euro delight for Wales and Aaron Ramsey as they beat Belgium last night to reach the semi-finals of the European Championships. The Arsenal man was in sensational form, getting two assists on the night. The first was a corner for Ashley Williams to nod home an equaliser in the first half, but in the second he played a key role in Hal Robson-Kanu’s strike to put Wales ahead.

His run into space was excellent and his first touch to control Gareth Bale’s long pass matched that. He put in a first time cross which the former Reading striker turned into something special, his turn left the Belgian defence bamboozled and he calmly finished past Thibaut Courtois to make it 2-1. A late header from Sam Vokes sealed a brilliant win for the Welsh – more than deserved against a disjointed, dysfunctional Belgian side.

What an array of talent they have on paper, but sadly for them matches are played on grass, and they looked like a group of individuals looking to one another to do something special, whereas Wales were very much a team. Sadly for Aaron though, he picked up a yellow card late in the game which rules him out of the showdown with Portugal.

It’s only his second yellow in five games which, in itself, makes missing a game of this magnitude very harsh. In previous tournaments what has happened is that there’s a yellow card amnesty after the group stages, so any bookings picked up are wiped out. Unfortunately, even if that system had been put in place, Ramsey would still have missed out as the yellow cards came in consecutive games – in the first knock-out round against Northern Ireland, and then last night.

Still, it’s difficult not to feel sympathy for him. It is just two bookings in five games at a major tournament, so to pick up a ban for a game of that importance still feels a bit cruel. It’s not as if he was going about the place like Fellaini, trying to perform lobotomies with his spiky elbows. But hey, there’s nothing he can do now but hope his teammates can do enough to get him another game at these championships.

It will be the game billed as Bale v Ronaldo, which is reasonable enough – but let’s hope Wales don’t miss Ramsey too much. He has four assists to his name, more than anyone else at the finals, and he just adds a bit of class and craft where it’s really needed. I really hope they can do it though. What a fantastic story it would be if they were to make the final. Against Iceland.

Ramsey will have to console himself with a hug from Robert Pires. That would make everything better.

Today it’s Germany v Italy. A hard one to call really, and obviously there’s Arsenal interest with Mesut Ozil involved. Italy successfully negated Spain’s admittedly blunt attack, Germany have a bit more about them up front I think, and isn’t there some stat that they’ve never beaten Italy in a major finals? Is the law of averages on their side today? I’m gonna put a couple of quid on a Germany win in extra-time.

From an Arsenal point of view it’s very quiet. Young midfield Dan Crowley is going to spend the 2016/17 season on loan at Oxford United, while Wojciech Szczesny he’ll use his holiday time to think about his future, saying he has no idea where he’s going to play next season.

Given there is some uncertainty over the future of David Ospina, whose Copa America performances will have put him very much in the shop window, Szczesny may find himself required as back-up for Petr Cech. Not a situation I’d be unhappy with at all, but whether or not he’d be into it remains to be seen.

Right, that’s it, have a good Saturday whatever you do. Till tomorrow.