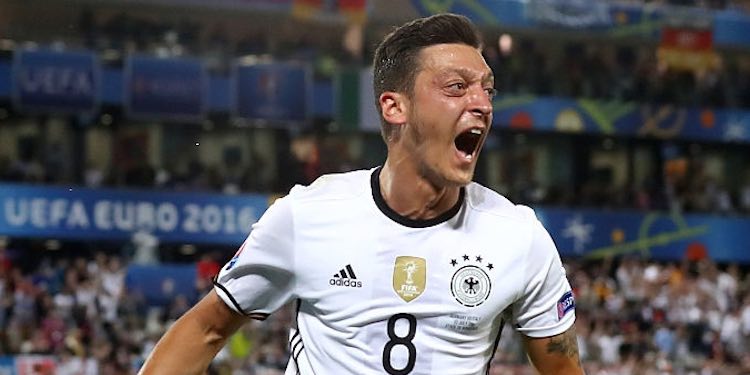 Morning all. Here are some things that I would let Mesut Ozil do:

1 – Be the creative fulcrum of my football team

5 – Mind my dog for me when I went on holidays

6 – Bring Flamini along if we ever went out for dinner. I’d say that guy has some stories.

Now, here are some things I would not let Mesut Ozil do:

To be fair to him, he wasn’t the only one who missed for Germany. Bastian Schweinsteiger and Thomas Muller also failed from the spot. But then so did four Italian players, in particular Simone Zaza whose run up was that of a man who deserved to fire his penalty over the bar. With each ridiculous teeny-tiny step he took, he added another 3 feet of elevation to his effort which eventually went about 7 yards over the bar.

I’m all for individuality and self-expression, but having come on as a substitute simply to take a penalty, he looked a bit daft doing that. Maybe that’s how he always takes penalties, in which case I suppose that’s fair enough, but it was still an almost perfect comedy moment for the neutrals (and I guess Germans).

Ozil had put Germany ahead in the second half with an excellent finish – the timing of his run was superb and he left Buffon with no chance.

Italy equalised from the spot after a frankly ridiculous handball from Jerome Boateng which I have tasked our graphics department with recreating faithfully for you this morning: 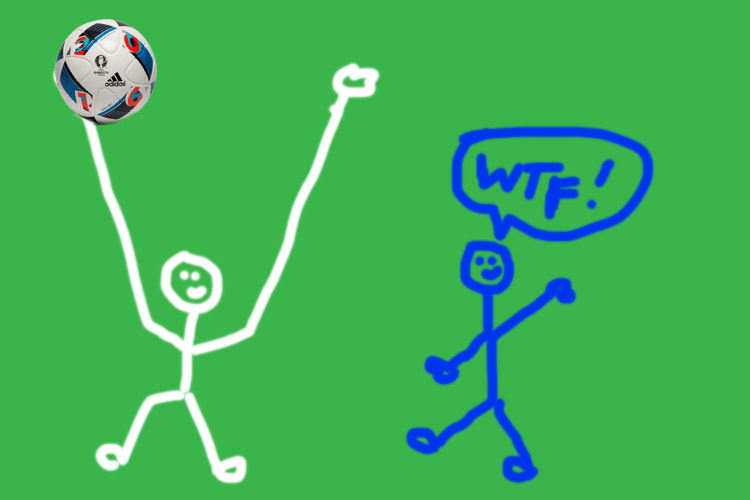 The stuff you can do with Photoshop these days is incredible. It’s like being there. During the game I was WhatsApping my Italian friend, and he kept saying player names at me – like Cazzo and Coglioni – but they were pretty anonymous to me.

So, Germany go through the semi-finals to meet the winner of tonight’s encounter between France and Iceland. There’s obviously Arsenal interest with Olivier Giroud and Laurent Koscielny, and as much as I want them to do well, I want Iceland to do better. Sorry guys, but the world needs more joy in it at the moment, and while 66 million French men and women would be a good start, there are more of us in need of a pick me up right now.

Can they do it? I doubt it, but we’ve been shown more than once recently that strange things are afoot in whatever universe we’ve slipped into since the death of David Bowie, so you can’t rule anything out. That takes place at 8pm tonight, and I will be watching.

Not a lot else happening. Arsene Wenger has been asked about taking the England job. He said:

I have a contract until 2017 with Arsenal and I have always respected my contracts, but I don’t know what I’ll do after. But it’s a good challenge for any coach. The players are young, they have quality players. They can only do better.

Ever the diplomat. ‘Good challenge’, heh.

We have had a few calls, but Alexandre will stay. I think it is his desire and the coach counts on him.

Is that another one off our striking list? Was he ever on it? Who will be the striker? Because time is marching onwards, and I’m afraid I must insist. You see, Arsenal fans have been most vocal on the subject of the striker. “Where’s the striker? “When are you going to get the striker?” “Why aren’t you getting the striker now?” And so on. So please, the striker.

Finally, a word for Gigi Buffon who might well have played at his last tournament. Not only did he show what a brilliant goalkeeper he is during the game, he showed what an absolute dude he is afterwards by taking time to congratulate the German players despite how gutted he must have been. He’s one of the best ever, and the game needs more people like him.