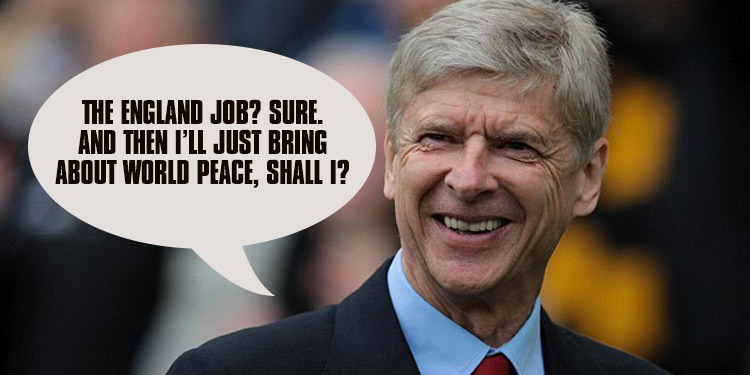 Morning all from a miserably wet Dublin where I have a sore knee from playing football. I’m hoping I got a kick on it but I don’t remember that happening, and I only felt it hurt when I woke up. It’s below the knee-cap though, so hopefully it’s just some bruising and not ligamenty or something.

It’s a rest day at the European Championships, the first quarter-final takes place tomorrow. There’s still some Arsenal interest in tournament of course. The remaining players are:

Bar those of you with a vested interest in those countries, I’m assuming everyone is backing Iceland at this point. I think France will probably end up being a step too far for them, but this is very odd world we live in at the moment, and pretty much anything can happen, so you never know. Nobody expected them to beat England, of course, and look how that turned out.

Speaking of England, the search for a new manager begins, and perhaps it sums up the state of play that Gareth Southgate is set to take over on an interim basis while they try and identify a new man. The fact that the FA chief executive Martin Glenn has declared himself ‘no football expert’ is rather worrying, and this magnificent quote from a press conference yesterday rather sums it all up:

It has to be the best man or woman for the job; more likely a man.

Brilliant, but remember he’s no football expert. I mean, what could the possible benefits be of having an actual football expert in charge of the Football Association. It’s hard to get your head around such a ridiculous, out-there, left-field concept, but if you try really hard it starts to make some sense.

Various reports this morning say that the FA would like Arsene Wenger to do the job, but the key problem there is that Arsene Wenger is an intelligent man, and he must realise that the job of England manager – despite being fantastically well paid – is one of the worst jobs in football. A brief honeymoon period, followed by agendas, vegetable Photoshops, and inevitable disgrace when the players underperform. I can’t imagine for one second that Wenger would be interested in that kind of poisoned chalice, because that’s exactly what it is.

I saw a remarkable statistic yesterday that since 1966 England have won just 6 games in the knockout stages of international tournaments. That is genuinely incredible and terrible at the same time. You know, it really strikes me that England could do with a football expert in charge of football, because until such time as they get one, these struggles will continue.

Look at Michael Owen – a man paid handsomely for his opinions on the game – saying that for him the only choice for England now is Glenn Hoddle. How do you even begin to process that? Hoddle hasn’t had a management job since 2006, when he resigned from Wolves, and his main role these days is as pundit where his word-salad and incoherence makes him stand-out from contemporaries who make about as much sense as not having a football expert in charge of an association tasked with the running of football.

The question that should be asked is why is anyone even considering Glenn Hoddle, and the answer is probably because there aren’t many other candidates out there. If he’s the best man for the job, then there’s something seriously wrong.

Top level English managers are few and far between these days, and that is something that the FA have to address. When you look at the dearth of coaches in the context of other European countries, it explains a lot. Via Football 365:

Spot the two nations who have dominated international football for the last while, and see if we can work out why that might be. Until fundamentals like that are addressed, thus improving the quality of English players because they’re being taught by more highly qualified men, England will always be playing catch-up.

You could also ask if the money in the Premier League is having an impact on English players. The easy thing to do is point to the influx of foreign players and say they deny opportunity to young English/British players, and perhaps there’s something to that. But how many English players look to further their football education by playing abroad?

Almost none. And this is because of money. If you’re a hot prospect of an 18 or 19 year old, even at a mid-sized club, you’re going to be on big money because your club knows they need to fend off approaches from the big boys. Or, with the new TV deals, they can almost match what’s being paid there anyway. How many footballers these days would turn down £60,000 a week at mid-table club to earn 20-30-40% of that in a foreign league, regardless of how much it help their development as players?

Almost none. Understandably so too. A footballer’s career is relatively fleeting, so it’s human nature to take the best financial offer, and to make as much as you can in that short time-frame. You can probably earn more in the Championship than you can in Spain or Germany, unless you’re at one of the big, big clubs, so where’s the incentive to travel, to learn, to be educated?

So while money creates a fantastic brand, makes the Premier League attractive to fans, TV companies, sponsors, and players from all over the world, it also creates an environment in which ambition is directly related to how much you earn, and not how good you can become as a player. Young players have a lot very early, and it’s impossible not to think that it has an effect on their drive and ambition.

I’m sure many of them to do want to improve, to achieve, to develop and be the best they can be, but certainly not all. And when you’re basically content – even if that’s subconsciously – it has an impact on what you do and how you do it. And when what you do is football, the results are obvious.

So, lots of England to think about. First of all, ‘How do get ourselves in a position where Glenn Hoddle is not an option?’, and after that how to improve the structures of the game at all levels. Not the Premier League, which exists in its own bubble of razzmatazz and fakery, but the game that kids start to play and should want to play every week. Until they do that, it doesn’t really matter who’s in charge of the national team, because the outcome will be much the same.