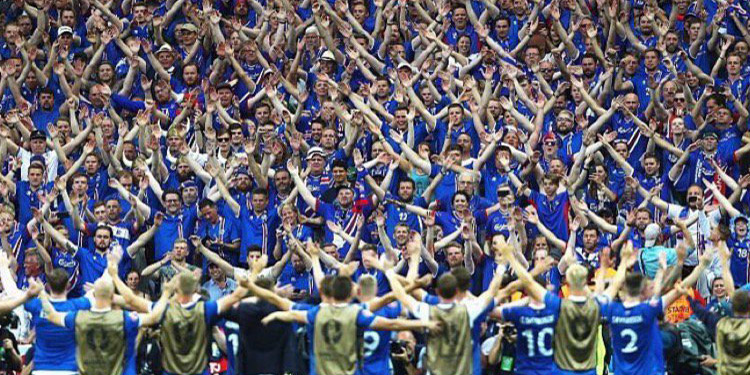 Morning all. Amazing scenes at the European Championships yesterday. If Iceland’s progression is a dream, England’s defeat was little short of a nightmare, prompting the immediate resignation of Roy Hodgson.

It had started so well when Wayne Rooney showed he’s an actual world class central midfielder and not a fading former forward by blasting an early penalty just inside the post to England 1-0 up. Just the start you need in a game like this. Settle the nerves. Something to build on.

Except Iceland were level within a couple of minutes. A long throw routine, one that was obviously well rehearsed, saw Ragnar Sigurdsson run off Kyle Walker to equalise. After that, well, there’s only one way to illustrate what happened next and former England manager Steve McClaren, in the Sky studios, does it  brilliantly:

It’s not the first time in this tournament that Dandruff Joe has been found wanting. That Gareth Bale free kick in the Wales game was one he really should have saved, and this was another howler. While there was much more to the final result than this, he played a significant part in England’s exit, no question.

Iceland took the lead into half-time, England brought on Jack Wilshere in place of Eric Dire. England huffed and puffed, Iceland defended strongly. England brought on Jamie Vardy, on the odd occasion he got a sniff, Iceland did stuff like this. Meanwhile Harry Kane, who has somehow managed to convince the England management that he’s a dead-ball expert, did this.

Seriously, what on earth is that about? I guess he’s trying to Ronaldo it, that whole thing with the laces, but that is just abject. And at this stage of a tournament in a game in which England are desperately trying to get a goal, he’s trying out stuff like that? It’s bad from him, but worse that he’s allowed do it at all. Unless he’s firing them in in training – which is a fair shout considering he’s probably lashing them at Joe Hart.

It might have been 3-1 when Iceland broke late on but Hart made a save. Then England put on Marcus Rashford for actual world class central midfielder and not a fading former forward Wayne Rooney, all the forwards with nobody in midfield to provide them with decent passes. It was dreadful stuff, a team that has suffered all tournament from accommodating Rooney in a position in which he’s functional at best had no real system, no craft, no guile, and Iceland ate it up like bread and butter.

As bad as England were though, you have to give enormous credit to Iceland. Forget about the population of the country and all that patronising nonsense for a few minutes, not every report has to reference that. This was a team that was well drilled, well organised, and who deserved their win on the night. A team that has in recent times beat Holland home and away, beaten the Czech Republic, beaten Turkey, beaten Austria, drawn with Portugal, and now beaten England. It’s not by accident, it’s by design (interesting read on that here, by the way).

Football has, in recent years, suffered from its predictability. Money and status have ruled the roost for so long. But we’ve seen a remarkable turnaround in 2016, anything can happen now, and you could see how much it meant to the players and the fans afterwards. I know England fans will be smarting this morning, but defeat didn’t come at the hands of an old enemy. The Iceland celebrations afterwards were just brilliant to watch:

No doubt Roy Hodgson will come in for plenty of stick this morning from sections of the press, and he did not have a good tournament. His management and decision making was poor, but as yet another England manager falls short, there has to be some clearer and different thinking about what went wrong at a big tournament once more.

Is it that England can’t find a man good enough to make them competitive? Is it the players? Do the media play a part in building the hype and expectation to levels that are unreasonable? Well …

Looking at the teams in this tournament, England could actually win the darn thing.

But maybe there’s a need to look beyond those things, and at the structures that exist above the playing side. The FA is a prehistoric stuffy organisation not exactly filled with forward thinking people. Surely at some point questions need to be asked of them and of their role in what is another failure at international level. Appointing another manager, who might or might not be flavour of the month, without addressing any of the underlying issues can only bring about more of the same.

Anyway, much for England to consider, but more for Iceland to enjoy as they go into the quarter-finals to meet the hosts France. Can they carry on? It would be amazing to see it, and I guess pretty much every neutral out there is hoping they continue to their momentum, because they’ve added something really special to these finals.

Earlier, Italy beat Spain 2-0. A tactical masterclass from Antonio Conte whose side, who on paper were not the favourites, outplayed a Spanish side that look just bored of it all now. Tired of being the best in the world, fed-up of having lots of the ball, weary of controlled possession and pretty triangles. They’ve lost the hunger after such a period of success, that’s obvious. Italy thoroughly deserved the win, leaving it late to seal it, but no less worthy of it because of that.

So now we have a rest until Thursday, when the first quarter-final between Poland and Portugal takes place.

In terms of Arsenal news, there’s little or nothing going on really, but links to two strikers should give us something to talk about. Lyon’s Alexandre Lacazette is somebody whose name has been mentioned a few times before, but young Brazilian forward ‘Gabigol’ is a new entry on the list. At a time when obvious candidates are in short supply, and nobody has really stood out at the Euros, it does feel as if we’ll have to pull something out of left field to find the striker we need – maybe this is the guy. We’ll see.

There was also an Arsecast Extra in which James and I chat about the Euros, the effects of Brexit on the Premier League, Arsenal players missing penalties and lots more. Listen below.

Right, that’s it for this morning. We’ll have any news throughout the day on Arseblog News. More here tomorrow.