I spent the formative years of my professional career working in fraud investigation, particularly, training for investigators of financial fraud. Investigators are constantly coached in how to think critically. To maintain a critical outlook, one has to confront and appreciate the weaknesses of one’s own mind. We are all hugely susceptible to bias; the human brain is subjected to so many pieces of information in an average day that it simply has to take shortcuts to assimilate it.

It is often tempting to extrapolate broad themes from isolated pieces of evidence and this can be dangerous in the course of criminal investigation. The obsession with the bigger picture and the construction of a case can lead you to overplay the importance of evidence that is insignificant, or else to misinterpret its significance altogether. In the altogether less serious world of football and football analysis, we often see this too. Given the inherent randomness of the sport and the emotional reaction it provokes, football is actually much more prone to this phenomenon.

The term du jour for this denouement is “confirmation bias”, but I fear it’s becoming sullied in football parlance through over use. So addressing the flaws in one’s football team is to negotiate a tempest of frustration, hurt, preconception and a desire for the validation of one’s personal bugbears. Nobody is impervious to this, from the angriest man on twitter© to the razor sharp intellectual. So it is fretfully that I don kid gloves and try to address whether there are any themes in Arsenal’s more impoverished performances this season, symbols which hint at an underlying weakness.

Because despite the fact that we sit top of the Premier League at time of writing, I think it’s fair to say that there have been as many, if not more, poor performances this season than truly great ones. Arsenal were well beaten at Bayern Munich, Sheffield Wednesday and Southampton, they were poor at Norwich and suffered limp defeats at the hands of Olympiacos, Dinamo Zagreb and at home to West Ham. They were also fortunate to salvage a draw at home to Spurs. (I thought they played reasonably well at West Brom, where they also lost).

At the opposite end of the spectrum, Arsenal ripped Manchester United limb from limb and economically dissected Manchester City and Bayern Munich at home, whilst the calm disposal of Olympiacos under huge pressure in Athens ranks in the Gunners’ most impressive displays. The dismantling of Leicester grows ever more significant in hindsight. An autopsy of Arsenal’s best and worst performances begins to reveal some trends.

In a game as chaotic as football, no motif persists in perpetuity, but there is almost an inverse relationship between Arsenal’s possession stats and their performances. In a weird twist of fate, Arsenal seem to have become better at playing without the ball than with it, as the tables below demonstrate. That said, there are important caveats. It’s quite natural that the team leading a match in its closing stages drops off and holds their shape, whilst the team chasing is more likely to be on the ball.

*All possession stats via whoscored.com

The away game at Bayern Munich represents a big outlier. Bayern are probably the best possession side in world football and can afford to continue their strategy unabashed without concerning themselves too much over their opponents. Watford also allowed Arsenal 60% of the ball during the 3-0 win at Vicarage Road in October, whilst Bournemouth allowed them 55% most recently. I think the possession figures from the Leicester match are virtually inadmissible because, as the final scoreline attests, both sides attacked and counter attacked with abandon.

My overriding impression is that Arsenal struggle against teams that make a conscious decision to let them have possession and focus on forcing errors. The Boxing Day shellacking at the hands of Southampton illustrates this difficulty to a tee. Few commentators would describe the Saints’ performance as anything less than totally dominant, yet they only had had the ball for 39% of the match. They completed 74% of their passes compared to Arsenal’s 85% in the same metric.

In blustery conditions and with a stretched Gunners’ squad suffering from fatigue, the Saints concentrated on forcing Arsenal into turnovers in their own half. Wenger’s men showed discomfort with this tactic last season too, most notably in matches away at Liverpool, Tottenham and Borussia Dortmund. Everton’s harrying and pressing saw them race into a 2 goal lead at Goodison Park last August, until they tired and Arsenal snatched an improbable draw with a pair of late goals.

The upcoming cluster of away matches provide Arsene Wenger with cause for concern therefore. There is Klopp’s Liverpool at Anfield, Stoke City, Bournemouth, who work incredibly hard at home, Pochettino’s Spurs, the Argentine is always a manager that the Gunners have toiled with due to his love of a high pressing game. Martinez’s Everton side await again in March. Of the Gunners’ next 7 away matches, at time of writing, a trip to Old Trafford would seem to play into their hands the most!

Arsenal prefer to sit off opponents and draw them out, before attacking via quick transitions. Their most prominent attackers- Özil, Alexis, Walcott and Ramsey- all thrive in this scenario. Captain Per Mertesacker certainly prefers this type of match too, from a defensive standpoint. The key enabler for the team to be able to play in this manner is to score the first goal. This also helps them to negate the high press. Consequently, matches against more enterprising opponents are beginning to suit them, with 13 points taken from a possible 15 against other teams in the current top 6.

Again, there are outliers. The match at Leicester in September is anomalous in this regard, with the Foxes taking the lead. Arsenal scored first against West Brom and Norwich but took only a single point from those two fixtures. On both occasions, they lost important defensive players shortly before conceding. Koscielny was injured at Norwich and minutes later, his replacement Gabriel was culpable for the equaliser. Whilst West Brom defeated the Gunners with an own goal from Mikel Arteta, the direct replacement for the injured Francis Coquelin.

@Orbinho has recently tweeted some revealing statistics around Arsenal’s increasing inability to overcome deficits. Once behind, it becomes difficult for Arsenal to absorb pressure and dominate transitions. They are afforded more of the ball and opponents are again able to either harry them into submission, or else erect a Maginot Line in front of their penalty area. In the latter regard, the genome of the attack has proved to be a stumbling block for Arsenal in their ability to overcome teams that lead them. 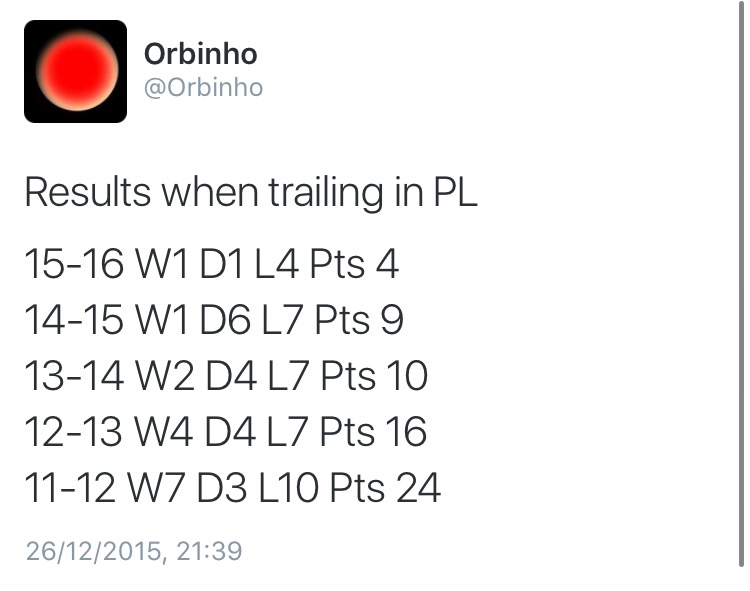 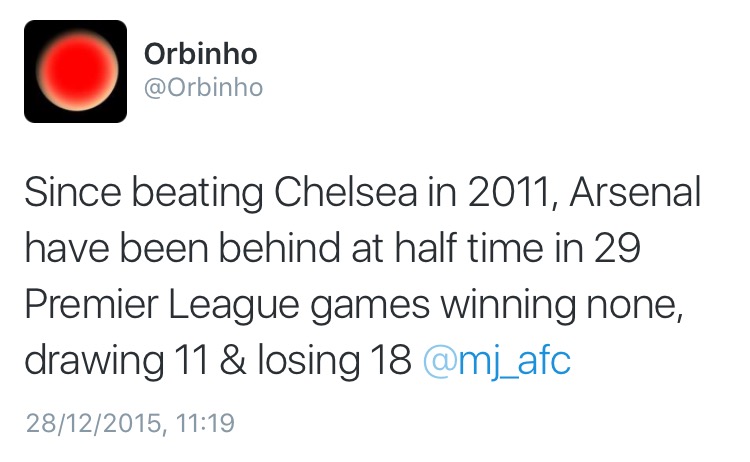 Since the start of the 2013-14 season, Arsenal have scored a total of 24 equalising goals. Despite being fit for the majority of this period, only 3 of those have been scored by Olivier Giroud (his most recent against Everton in August 2014). His skillset becomes especially neutered against teams that look to crowd Arsenal out. By contrast, Theo Walcott has 5 of the team’s last 24 equalisers- more than 20% of Arsenal’s total. This is especially impressive considering that he was either injured or frozen out of the team for around 50% of this time period. He has scored 3 of Arsenal’s last 5 levellers.

Theo adds a frisson of unpredictability in this situation that Giroud does not offer. (In case you are interested, Alexis Sanchez only has 1 equaliser in an Arsenal shirt. Lukas Podolski has 3 since the beginning of 2013-14, the same amount as Giroud). As I explained at the outset, there is a danger of immersing oneself in data and identifying trends that might not exist in reality.

I do think it is safe to say that Arsenal like the pattern of a game to follow a certain path, as most teams will. But their ability to steel themselves and swallow the porridge when it’s either a little too hot or a little too cold, may hold the key to their title challenge.