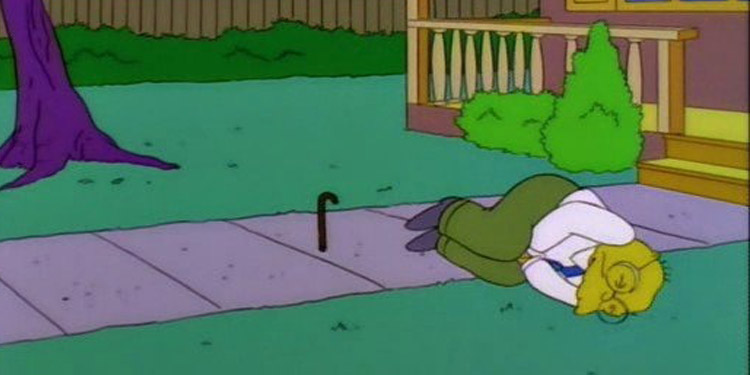 I played football for the first time in two months yesterday. Back in October I went over on my ankle a bit, not the worst that I’ve ever done, and I thought initially ‘Three weeks’, but by doing so my injury was infused with the essence of Arsenal and 8 weeks later I finally stepped foot on the hallowed Astroturf with black rubbery bits once more.

This morning, I ache. Every single bit of me. In particular my shin, which I clobbered off someone else’s shin and which now has a comedy lump on it (I don’t do shinpads in 5s). I’m also a little delicate in another area  thanks to the Mugsmasher. We’re on the same team and it’s his turn in goal. He picks the ball up on the edge of the area, I am standing about a yard outside it. Rather than roll the ball gently to my feet, he tries a spectacular kick out of his hands to someone down the far end of the pitch.

Well, it would have been spectacular had he managed to do that. Instead he whacked it straight into my groinal region, scoring himself a hat-trick in the process by hitting meat and two veg, leaving me on the ground trying not to be sick. But, you know, these are the little joys of football that you miss when you don’t play, and even if I am little delicate this morning, I’m sure Jack Wilshere, Danny Welbeck and Tomas Rosicky are jealous. Your time will come guys, honest.

Actually, the manager was a little more optimistic about Jack than he was earlier in the week. He ruled out any possibility that his season was over and that he’d miss Euro 2016:

I don’t believe that at all. I maintain the end of February, it could be earlier that he will play again. Consider you play the European Championship on June 10, that is a long way to go.

So that’s positive. Assuming that he doesn’t catch a Cech goal kick in the nuts in training when he does return, he’s still got a part to play this season. In the short-term, of course, it doesn’t change the fact the squad is pretty light, and the manager was asked if he was going to be up to much in January. He said:

I will be busy, for sure. I said one month ago that we are short, especially in midfield.

He was asked about the potential signing of Mohamed Elnenny from FC Basel, and in typical fashion was kept his cards close to his chest:

Unfortunately I cannot say anything about this player because nothing has been concluded.

The thing that jumps out there is that you can’t conclude something if you haven’t already started it, so that’s a close to an admission that we’re in the process of getting that deal done. How quickly it’ll happen, and how quickly he’ll be available to us, we’ll have to wait and see, but certainly he looks like the being the first signing, and even by Arsene Wenger’s standards, signing one player isn’t really a definition of ‘busy’.

I remain cautiously optimistic that we might see another player arrive, but I suspect that might be something that happens later in the month once the pressing need for a midfield body has been sorted out with Elnenny. Again, I don’t quite know who or what kind of player, my gut feeling is that if we could find a wide forward who would really add something to the squad, then we’d be inclined to do that, but we’ll have to just see what happens.

There might also be some business the other way, with Wenger admitting that Mathieu Debuchy could be on his way out. On his potential departure, he said:

It’s not impossible. We’ll see. I’m happy if he stays. But we’ll see.

The fact that Debuchy was supposed to start against Bournemouth, only to be replaced very late by Hector Bellerin, suggests that something might be moving in this particular case. The worry is it might leave us short if Bellerin is absent for any period, but I think he’ll look at Calum Chambers as the man to fill that gap if he does let Debuchy go.

On a human level I think we can all understand the player’s frustration. He’s 30, he wants to play, and he’s worried about missing Euro 2016 in his own country. On the other hand though, he’s a guy who is prioritising his international career over his club, and who isn’t willing to remain as part of a squad that’s challenging for the Premier League this season. If he goes, I think we have to trust the manager that his absence won’t be felt.

There have been loan departures before that seemed to make little sense when they happened – Lukas Podolski when he went to Inter Milan in particular, and there was also the Arshavin one in February when even in the plumpness of his later years he might have been handy to have around – but ultimately these guys weren’t missed at all. Given Debuchy’s form anyway this season, you might ask if someone else might be a better option anyway. One to keep an eye on.

Right, that’s just about that, I’ll be back tomorrow with a brief one for the day that’s in. I’d just like to thank you once more for being here throughout another year (calendar year champions, huzzah!). However you consume what we do, whether it’s the blog, the columnists, the news, the podcasts, Facebook, Twitter, Instagram or anything else, it’s really very much appreciated. Thank you for reading, listening, and interacting, and for all your emails and messages throughout.

I’d like to wish you and yours a very happy, peaceful, and prosperous new year, filled with love and trophies. Talk to you next year.