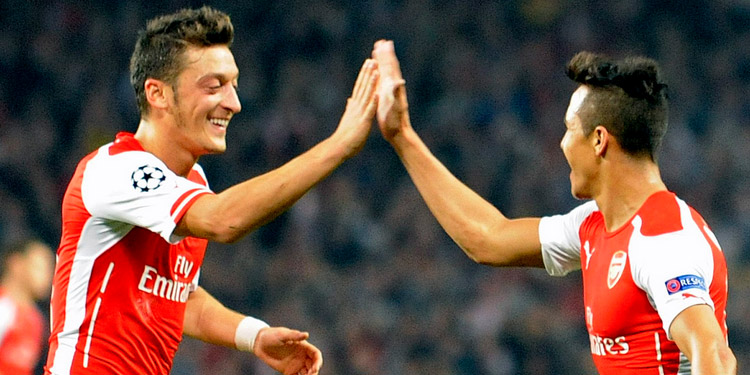 Morning all, last night’s 0-0 draw between Leicester City and Manchester City means the Premier League table has a nice look to it at the end of 2015.

As a calendar year it’s been a very good one from an Arsenal point of view. Despite some poor results here and there, for the most part we’ve had good results. We’ve played 38 games, won 25, drawn 6 and lost 7, taking 81 points from a potential 114.

Clearly it’s not perfect, nor does it mean much other than a guide to our form over a period of 12 months because it’s now incumbent on us to maintain that kind of level throughout the second part of this season. There are no trophies for being top on New Year’s Eve, of course, but I think it’s ok to recognise that we’ve given ourselves a decent platform to do just that.

At times it feels like we live in a world where absolute perfection is the minimum standard, and anything less than that means open season in terms of criticism, constructive or otherwise. That applies to teams and players and managers, and I don’t just mean at Arsenal. I do wonder sometimes if these expectations of error free football and footballers are unhealthy though.

I know I’ve mentioned this before, but I recall watching the 1989 season review (ripped from Betamax probably), and in our first home game of the season we lost 3-2 to Aston Villa. I know David O’Leary made a really poor clearance which led to one of the goals, and it might have been Steve Bould who was caught out for another one.

It struck me that had the Internet and social media existed, these guys, these legends to whom all others that follow are held up to in comparison, would have been slaughtered.

There’s a tendency to look back at the teams and players that achieved things and view them through slightly rose tinted glasses, as if they were flawless. It’s understandable, but clearly not the case. When we were doing the Together book about the 2003/4 season, it was noticeable how many one goal victories there were in the league that season.

I think we remember more clearly the scintillating 4-0 over Boro, the 4-1 or 5-0 over Leeds, or the 3-0 over Birmingham, rather than the more mundane 2-1 win against Charlton, a 1-0 at Fulham, or a 1-0 at Southampton when a Robert Pires goal was enough to take the points. Not to mention the 12 draws against the likes of Bolton, Leicester and Portsmouth.

As it was back then, it’s about fine margins and being able to master those better than anyone else. We were fortunate then to have a team with four genuinely world class players in Thierry Henry, Dennis Bergkamp, Patrick Vieira and Pires, and those guys were instrumental in ensuring that games that might have been drawn were won, or those that might have been lost were drawn.

We don’t have four players like that now. We have two, for sure, in Mesut Ozil and Alexis Sanchez, and maybe a combo like Walcott, Ramsey and Giroud could add up to one more (or thereabouts, I’m conflicted by the concept of 13/15ths of a player), with the goals they score. I guess my point is that those teams had their flaws too, those teams frustrated fans, those players made mistakes.

It’s just that nowadays mistakes and flaws are amplified and echo through the weeks like never before. Some of that is due to the weight of pressure and expectation. We haven’t won the league since 2004, so that does add a layer of something extra to it.

But sometimes it’s worth looking at what we have and appreciating it. Remove the context, and if you’d asked any Arsenal fan if they’d be happy being top at the turn of the year I’m sure they’d have said yes. That we’ve got there with a first half of the season that you’d probably give a 7/10 if you were rating it would probably be a bit of a surprise, but football is surprising at times.

If you’d said we’d do that without Tomas Rosicky, Jack Wilshere or Danny Welbeck playing at all; with our first choice central midfield due sidelined with pretty serious injuries until March; without Walcott, Ramsey and Oxlade-Chamberlain for periods; without Arteta for the most part; without Alexis Sanchez for going on a month now (since his injury we’ve won 5 and lost 1 from the 6 games we’ve played); you’d have think that the players who did play have shown plenty to be given credit for.

Is it perfect? No, it can’t be. Can it be improved? Yes, of course. On the pitch, in the transfer market, and certainly in the medical bay, we can do better and if we want to win this title, we have to do better, but let’s not be blind to the fact that we’re in a good position right now, and have given ourselves a fantastic chance to really go for the league this season.

We might also have expected the top of the table to look differently than it does. If you’d told the Arsenal fan who was happy to be top at New Year that it would be Leicester and Sp*rs closest to us, they probably would have laughed. But who and what lies beneath is not hugely important, it’s what’s ahead of us, and how we cope with that that really matters.

The manager meets the press today, so we’ll have all the pre-Newcastle news over on Arseblog News. No doubt he’ll be asked about potential transfer business too, so keep an eye on there for all the latest.

And for more thoughts on the January window, who we’d like to sign from another Premier League club, Mesut Ozil’s brilliance and the true meaning behind his goal celebration, check out this week’s Arsecast Extra. You can find it on site here, via Acast or subscribe via iTunes.

Happy listening, more from me tomorrow. Until then.